The group of Neolithic monuments on Orkney consists of a large chambered tomb (Maes Howe), two ceremonial stone circles (the Stones of Stenness and the Ring of Brodgar) and a settlement (Skara Brae), together with a number of unexcavated burial, ceremonial and settlement sites. The group constitutes a major prehistoric cultural landscape which gives a graphic depiction of life in this remote archipelago in the far north of Scotland some 5,000 years ago. 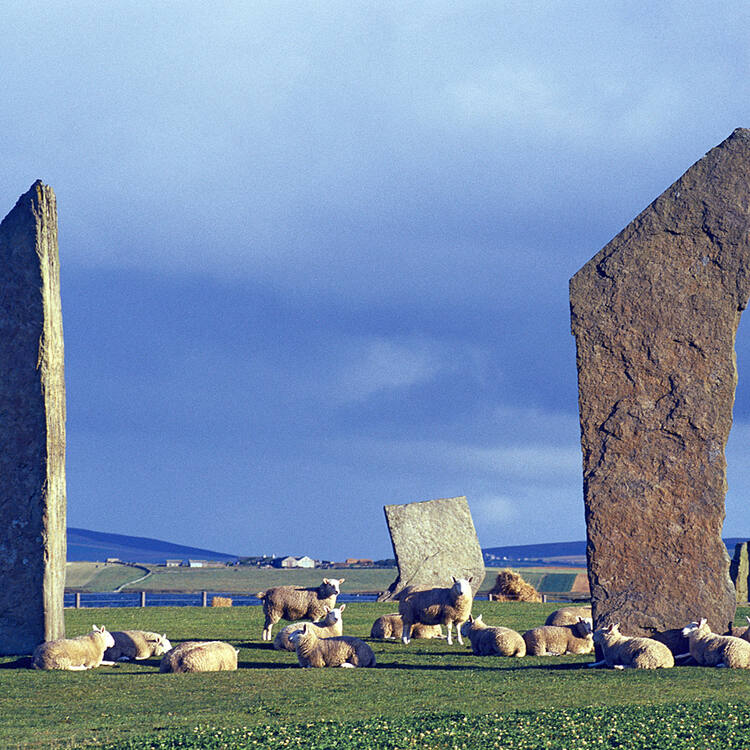 the Stones of Stenness © Sacred sites

The Orkney Islands lie 15km north of the coast of Scotland. The monuments are in two areas, some 6.6 km apart on the island of Mainland, the largest in the archipelago.

The group of monuments that make up the Heart of Neolithic Orkney consists of a remarkably well-preserved settlement, a large chambered tomb, and two stone circles with surrounding henges, together with a number of associated burial and ceremonial sites. The group constitutes a major relict cultural landscape graphically depicting life five thousand years ago in this remote archipelago.

The four monuments that make up the Heart of Neolithic Orkney are unquestionably among the most important Neolithic sites in Western Europe. These are the Ring of Brodgar, Stones of Stenness, Maeshowe and Skara Brae. They provide exceptional evidence of the material and spiritual standards as well as the beliefs and social structures of this dynamic period of prehistory.

The four main monuments, consisting of the four substantial surviving standing stones of the elliptical Stones of Stenness and the surrounding ditch and bank of the henge, the thirty-six surviving stones of the circular Ring of Brodgar with the thirteen Neolithic and Bronze Age mounds that are found around it and the stone setting known as the Comet Stone, the large stone chambered tomb of Maeshowe, whose passage points close to midwinter sunset, and the sophisticated settlement of Skara Brae with its stone built houses connected by narrow roofed passages, together with the Barnhouse Stone and the Watch Stone, serve as a paradigm of the megalithic culture of north-western Europe that is  unparalleled.

The property is characteristic of the farming culture prevalent from before 4000 BC in northwest Europe. It provides exceptional evidence of, and demonstrates with exceptional completeness, the domestic, ceremonial, and burial practices of a now vanished 5000-year-old culture and illustrates the material standards, social structures and ways of life of this dynamic period of prehistory, which gave rise to Avebury and Stonehenge (England), Bend of the Boyne (Ireland) and Carnac (France).

The monuments on the Brodgar and Stenness peninsulas were deliberately situated within a vast topographic bowl formed by a series of visually interconnected ridgelines stretching from Hoy to Greeny Hill and back. They are also visually linked to other contemporary and later monuments around the lochs. They thus form a fundamental part of a wider, highly complex archaeological landscape, which stretches over much of Orkney. The current, open and comparatively undeveloped landscape around the monuments allows an understanding of the apparently formal connections between the monuments and their natural settings. The wealth of contemporary burial and occupation sites in the buffer zone constitute an exceptional relict cultural landscape that supports the value of the main sites.

Criterion (i): The major monuments of the Stones of Stenness, the Ring of Brodgar, the chambered tomb of Maeshowe, and the settlement of Skara Brae display the highest sophistication in architectural accomplishment; they are technologically ingenious and monumental masterpieces.

Criterion (ii): The Heart of Neolithic Orkney exhibits an important interchange of human values during the development of the architecture of major ceremonial complexes in the British Isles, Ireland and northwest Europe.

Criterion (iii): Through the combination of ceremonial, funerary and domestic sites, the Heart of Neolithic Orkney bears a unique testimony to a cultural tradition that flourished between about 3000 BC and 2000 BC. The state of preservation of Skara Brae is unparalleled amongst Neolithic settlement sites in northern Europe.

Criterion (iv): The Heart of Neolithic Orkney is an outstanding example of an architectural ensemble and archaeological landscape that illustrate a significant stage of human history when the first large ceremonial monuments were built.

All the monuments lie within the designated boundaries of the property. However, the boundaries are tightly drawn and do not encompass the wider landscape setting of the monuments that provides their essential context, nor other monuments that can be seen to support the Outstanding Universal Value of the property. Part of the landscape is covered by a two part buffer zone, centred on Skara Brae in the west and on the Mainland monuments in the central west.

This fragile landscape is vulnerable to incremental change. Physical threats to the monuments include visitor footfall and coastal erosion.

The level of authenticity in the Heart of Neolithic Orkney is high. The state of preservation at Skara Brae is unparalleled for a prehistoric settlement in northern Europe. Where parts of the site have been lost or reconstructed during early excavations, there is sufficient information to identify and interpret the extent of such works.

Interventions at Maeshowe have been antiquarian and archaeological in nature; the monument is mostly in-situ and the passageway retains its alignment on the winter solstice sunset. Re-erection of some fallen stones at Stones of Stenness and Ring of Brodgar took place in the 19th and early 20th century, and works at Stenness also involved the erection of a ‘dolmen’, now reconfigured. There are, however, many antiquarian views of the monuments attesting to their prior appearance, and it is clear that they remain largely in-situ.

The central west Mainland monuments remain dominant features in the rural landscape. Their form and design are well-preserved and visitors are easily able to appreciate their location, setting and interrelationships with one another, with contemporary monuments situated outside the designated property, and with their geographical setting. This relationship with the wider topographic landscape helps define the modern experience of the property and seems to have been inextricably linked to the reasons for its development and use in prehistory.

World Heritage properties in Scotland are protected through the following pieces of legislation. The Town and Country Planning (Scotland) Act 1997 and The Planning etc. (Scotland) Act 2006 provide a framework for local and regional planning policy and act as the principal pieces of primary legislation guiding planning and development in Scotland. Additionally, individual buildings, monuments and areas of special archaeological or historical interest are designated and protected under The Planning (Listed Building and Conservation Areas) (Scotland) Act 1997 and the 1979 Ancient Monuments and Archaeological Areas Act.

The Scottish Historic Environment Policy (SHEP) is the primary policy guidance on the protection and management of the historic environment in Scotland. Scottish Planning Policy (SPP) sits alongside the SHEP and is the Government’s national planning policy on the historic environment. It provides for the protection of World Heritage properties by considering the impact of development on their Outstanding Universal Value, authenticity and integrity.

Orkney Islands Council prepared the Local Development Plan that sets out the Council’s policy for assessing planning applications and proposals for the allocation of land for development. The Plan contains policies that address the need to put an appropriate level of protection in place for the property and its setting. Supplementary Planning Guidance for the World Heritage Site has also been produced. These policies and guidance establish a general commitment to preserving the integrity and authenticity of the property. They also seek to manage the impact of development on the wider landscape setting, and to prevent development that would have an adverse impact on its Outstanding Universal Value through the designation of Inner Sensitive Zones, aligned with the two parts of the buffer zone and the identification of sensitive ridgelines outside this area. The Rural Conservation Area at Brodgar includes Maeshowe, the Stones of Stenness and the Ring of Brodgar, and it is envisaged to establish a Rural Conservation Area at the Bay of Skaill.

The property is in the care of Historic Scotland on behalf of Scottish Ministers. A Management Plan has been prepared by Historic Scotland in consultation with the Partners who share responsibility for managing the sites and access to them: Orkney Islands Council, Scottish Natural Heritage, and the Royal Society for the Protection of Birds. The Management Plan is a framework document, and sets out how the Partners will manage the property for the five years of the Plan period, together with longer-term aims and the Vision to protect, conserve, enhance and enjoy the property to support its Outstanding Universal Value. It does so by identifying a series of key issues and devising specific objectives or actions to address these issues. The Steering Group responsible for implementing the Management Plan comprises representatives of the Partners. Stakeholders drawn from the tourist industry, local landowners and the archaeological community participate in Delivery Groups reporting to the Steering Group with responsibilities for access and interpretation, research and education, conservation and protection, and tourism and marketing.

Condition surveys have been completed for each of the monuments. These documents record previous interventions and include a strategy for future maintenance and conservation. Conservation and maintenance programmes require detailed knowledge of the sites, and are managed and monitored by suitably experienced and qualified professionals. Conservation work undertaken at the sites follows national and international policy and seeks to balance minimum intervention with public accessibility to the monuments. Any intervention is given careful consideration and will only occur following detailed and rigorous analysis of potential consequences. In conservation work, local materials have been used where appropriate.

Management of tourism in and around the World Heritage property seeks to recognise its value  to the local economy, and to develop sustainable approaches to tourism. Key approaches include improved dispersal of visitors around the monuments that comprise the property and other sites in the wider area. A World Heritage Ranger Service supports this approach and allows for on-the-ground education about the issues affecting the site.

The relationships and linkages between the monuments and the wider open, almost treeless landscape, and between the monuments that comprise the property and those in the area outside it that support the Outstanding Universal Value are potentially at risk from change and development in the countryside. The long-term need to protect the key relationships between the monuments and their landscape settings and between the property and other related monuments is kept under review by the Steering Group. Policy HE1 as well as The Heart of Neolithic Orkney World Heritage Site in the Local Development Plan and the associated Supplementary Guidance require that developments have no significant negative impact on either the Outstanding Universal Value or the setting of the World Heritage property.

2008
top
Forgot your username or password?
Become a member