Our Lady of Burgos was begun in the 13th century at the same time as the great cathedrals of the Ile-de-France and was completed in the 15th and 16th centuries. The entire history of Gothic art is summed up in its superb architecture and its unique collection of works of art, including paintings, choir stalls, reredos, tombs and stained-glass windows. 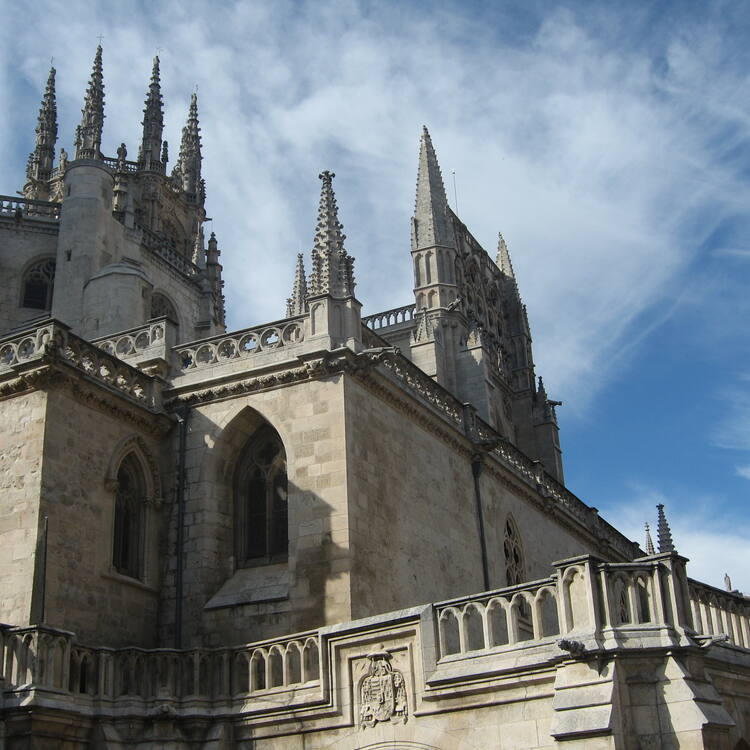 The Burgos Cathedral is located in the historical centre of the Spanish city of the same name, in the Autonomous Community of Castilla y León, in the northern Iberian Peninsula. The inscribed property encompasses 1.03 ha.

Construction on the Cathedral began in 1221 and was completed in 1567. It is a comprehensive example of the evolution of Gothic style, with the entire history of Gothic art exhibited in its superb architecture and unique collection of art, including paintings, choir stalls, reredos, tombs, and stained-glass windows.

The plan of the Cathedral is based on a Latin Cross of harmonious proportions of 84 by 59 metres. The three-story elevation, the vaulting, and the tracery of the windows are closely related to contemporary models of the north of France. The portals of the transept (the Puerta del Sarmental to the south and the Puerta de la Coronería to the north) may also be compared to the great sculpted ensembles of the French royal domain, while the enamelled, brass tomb of Bishop Mauricio resembles the so-called Limoges goldsmith work. Undertaken after the Cathedral, the two-storied cloister, which was completed towards 1280, still fits within the framework of the French high Gothic.

After a hiatus of nearly 200 years, work resumed on the Burgos Cathedral towards the middle of the 15th century and continued for more than 100 years. The work done during this time consisted of embellishments of great splendour, assuring the Cathedral’s continued world-renown status. The workshop was composed of an international team, and among the most famous architects were Juan de Colonia, soon relieved by his son Simon (responsible for the towers and open spires of the facade, the Constable's chapel, and the Saint Anne's chapel) and Felipe de Borgoña, assisted by numerous collaborators (responsible for the choir, cupola, and lantern tower over the transept crossing). When two of these architects, Juan de Vallejo and Juan de Castañeda, completed the prodigious cupola with its starred vaulting in 1567, the Burgos Cathedral unified one of the greatest known concentrations of late Gothic masterpieces: the Puerta de la Pellejería (1516) of Francisco de Colonia, the ornamental grill and choir stalls, the grill of the chapel of the Presentation (1519), the retable of Gil de Siloe in the Constable's chapel, the retable of Gil de Siloe and Diego de la Cruz in Saint Anne's chapel, the staircase of Diego de Siloe in the north transept arm (1519), the tombs of Bishop Alonso de Cartagena, Bishop Alonso Luis Osorio de Acuña, the Abbot Juan Ortega de Velasco, the Constable Pedro Hernández de Velasco and, his wife Doña Mencía de Mendoza, etc.

Thereafter, the cathedral continued to be a monument favoured by the arts: the Renaissance retable of the Capilla Mayor by Rodrigo and Martin de la Haya, Domingo de Berriz, and Juan de Anchieta (1562-1580), the tomb of Enrique de Peralta y Cardenas in the chapel of Saint Mary, the chapel of Santa Tecla, and the "trascoro" of the 18th century.

Criterion (ii): Burgos Cathedral has exerted, at different times throughout history, a considerable influence on the evolution of architecture and the arts. The Cathedral played an important role in the diffusion of the forms of 13th-century, French Gothic art in Spain. The internationally important Cathedral’s workshop in the 15th and 16th centuries, where artists from the Rhineland, Burgundy, and Flanders trained Spanish architects and sculptors, created one of the most flourishing schools at the end of the Middle Ages. The Cathedral’s also served as a model throughout the 19th century, i.e. the French architect Garnier was inspired by the staircase of Diego de Siloe when he created that of the Opera in Paris.

Criterion (iv): Burgos offers a celebrated example of an integral Gothic cathedral with its chapels, cloister, and annexes. Built over more than four centuries, the Cathedral bears testimony to the creative genius of architects, sculptors, and craftsmen throughout these periods.

Criterion (vi): Burgos Cathedral, with the tomb of El Cid and his wife Doña Jimena, is intimately linked to the history of the Reconquista and Spanish unity. Several members of the early royal house of Castile rest beneath the main altar. The memory of Saint Ferdinand is linked to the construction of this symbolic monument of the Spanish monarchy.

The property contains all key attributes to express its Outstanding Universal Value. The monument has been maintained as an integral Gothic cathedral, with chapels, cloister, and annexes; and is an extraordinary summary of European Gothic influences, which can be admired in every component of the structure, from the facades and chapels to the stained glass windows and sculptures. Regular works of maintenance have helped to sustain the material integrity of the monument. There are no negative effects from urban development, since it is legally protected at the highest level of Spanish law, with every action strictly controlled to preserve the Outstanding Universal Value of the property.

The Burgos Cathedral retains all the key features of authenticity in respect to location, materials, form, and design. Over time, continuous maintenance works have taken place under control and supervision of the Administration Departments in charge of protection and conservation of Cultural Heritage. The basis for these interventions is set out in the Director Plan. Regular restoration works in different parts of the monument have been undertaken, as well as several studies – including chemical and microclimatic analyses, and on the deterioration of the materials, especially the stone, due to dampness – in order to maintain the extraordinary cultural value of the monument. As a result, the authenticity of the Burgos Cathedral has been preserved.

The protection and management of Burgos Cathedral is under the responsibility and supervision of the Junta de Castilla y León, through the General Directorate of Cultural Heritage, and the Cathedral Chapter as the owner of the property.

The Burgos Cathedral has a Director Plan used as an instrument to analyse and plan any needed interventions for its adequate conservation. The Plan guarantees the constant maintenance of the Cathedral.

In respect to urban planning, a Special Plan for the Protection of the Historic City includes all the monumental surroundings of the Cathedral, which also overlaps with the surroundings of the Route of Santiago de Compostela. The Special Plan sets out the regulations for this area, with strict guidelines for general, urban development and for the uses of buildings in this area. In particular, the protection level of the Cathedral in this Plan is fully comprehensive, and the authorized actions are: consolidation, restoration, and conservation, as well as the use of adaptations that do not result in deterioration or irreversible interventions.