The Cueva de las Manos, Río Pinturas, contains an exceptional assemblage of cave art, executed between 13,000 and 9,500 years ago. It takes its name (Cave of the Hands) from the stencilled outlines of human hands in the cave, but there are also many depictions of animals, such as guanacos (Lama guanicoe ), still commonly found in the region, as well as hunting scenes. The people responsible for the paintings may have been the ancestors of the historic hunter-gatherer communities of Patagonia found by European settlers in the 19th century. 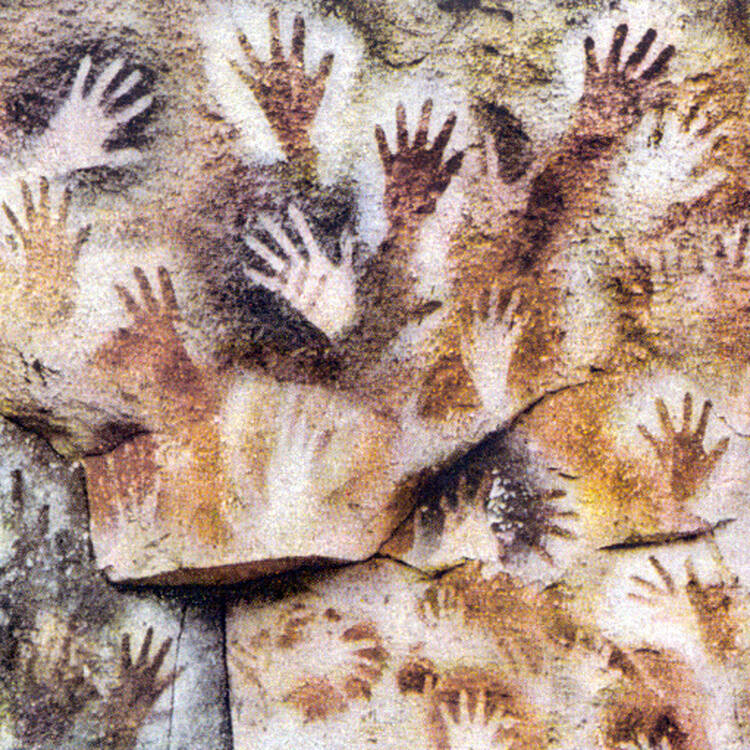 The Cueva de las Manos, Río Pinturas, contains an exceptional assemblage of cave art, with many painted rock shelters, including a cave, with magnificent pictographies surrounded by an outstanding landscape, with the river running through a deep canyon, which were executed between 9,300 and 1,300 years ago.

It takes its name (Cave of the Hands) from the stencilled outlines of human hands in the cave, but there are also many depictions of animals, such as guanacos (Lama guanicoe ), still commonly found in the region, as well as hunting scenes that depict animals and human figures interacting in a dynamic and naturalistic manner. The entrance to the Cueva is screened by a rock wall covered by many hand stencils. Within the rock shelter itself there are five concentrations of rock art, later figures and motifs often superimposed upon those from earlier periods. The paintings were executed with natural mineral pigments - iron oxides (red and purple), kaolin (white), and natrojarosite (yellow), manganese oxide (black) - ground and mixed with some form of binder.

The artistic sequence, which includes three main stylistic groups, began as early as the 10th millennium BP [Before Present]. The sequence is a long one: archaeological investigations have shown that the site was last inhabited around AD 700 by the possible ancestors of the first Tehuelche people of Patagonia. The Cueva is considered by the international scientific community to be one of the most important sites of the earliest hunter-gatherer groups in South America during Early Holocene that still maintains a good state of preservation and has a singular environment formation, unique at Santa Cruz province.

The rock art, its natural environment and the archaeological sites on this region are some of the very important reasons that made this area a focus for archaeological research for more than 25 years. They made an impact on the observer due not only the deep gorge walls surrounded by a privileged landscape, but also by the artistic compositions, variety of motifs and its polychromies. These scenes represent a unique evidence to know aboutthe first Patagonian hunters’ behaviour and their hunting techniques. Cueva de las Manos, Río Pinturas contains an exceptional assemblage of cave art, unique in the world, for its age and continuity throughout time, the beauty and the preservation conditions of the paintings, the magnificence of the collection of stencilled outlines of human hands and the hunting scenes, as well as the environment that surrounds the place of exciting beauty and for being part of the cultural value of the site itself.

Criterion (iii): The Cueva de las Manos contains an outstanding collection of prehistoric rock art which bears witness to the culture of the earliest human societies in South America.

The inscribed property encompasses 600 ha with a buffer zone of 2,338 ha. The attributes of the property, represented by the archaeological site, the surrounding setting, and its artistic depictions, that convey the Outstanding Universal Value of the Cueva de las Manos, Río Pinturas, are fully present both in the nuclear and buffer zones and have not been altered and do not face any imminent threats due to development or negligence.

The habitat surrounding the archaeological site remains intact and has the same animal species depicted through cave art approximately 10,000 years ago. This also applies to plant species. As mentioned above, this is a particular, unique, and a typical setting, both at a provincial and regional level, with great value for the preservation of the Argentine natural systems. The favourable conditions (very low humidity, no water infiltration, stable rock strata) at the rock shelter have ensured that the state of conservation of all but the most exposed paintings is excellent. However, the increase of tourism to Patagonia in recent years has resulted in damage from human vandalism. These has included graffiti, removal of fragments of painted rock, touching of painted surfaces, accumulation of dust and refuse, etc. although measures undertaken have reduced impacts from these factors.

The authenticity of the rock art of the Cueva de los Manos is unquestionable. It has survived several millennia untouched and no restoration has been carried out since it became widely known to the scientific community in the second half of the 20th century. The archaeological excavations have been very restricted, so as to obtain the maximum cultural information for dating the art with the minimum disturbance to archaeological layers or to the appearance of the rock shelter.

Scientific excavations have made it possible to relate the cave depictions located in the site to the communities living in the region since the 10th millennium Before Present. The evidence of the excavations made in the cave area led to the establishment of context links between the cultural levels and paintings. The authenticity of the pictorial sequence was also verified by in-depth research. The art sequence of the Cueva de las Manos is based on a detailed study of overlapping, the different use of hues, its various states of conservation, and the location of the depictions along different defined sectors. Its relation to the various cultural levels of the site is supported by carbon dating and indicators showing a direct association with them, such as mineral pigments or remains of painted fragments that came off the wall and found in the excavations.

These elements, along with research evidence and interdisciplinary analyses, strongly support the authenticity of the Cueva de las Manos site as a unique example of one of the earliest hunter-gatherer communities living in the South American region in the Early Holocene.

In 1997 a management plan was presented for the global administration of the site. It proposed many specific actions that had been carried out along the last 10 years of management: local permanent custody, visitor management strategies and an interpretation centre at the reception area. Additionally, assessments of the state of conservation of the site and natural deterioration causes were implemented, along with geomorphologic and geotechnical studies of the area and rock art conservation surveys.

The Cuevas de las Manos Site Committee was formed in March of 2006. It requires strengthening for the implementation of its activities and to ensure its operation and continuity. It would be very important to have a permanent presence of the Committee at Perito Moreno, closest village. This would facilitate decision-making when it is needed to solve concrete problems.