The List Archaeological Sites of Mycenae and Tiryns
Print

The archaeological sites of Mycenae and Tiryns are the imposing ruins of the two greatest cities of the Mycenaean civilization, which dominated the eastern Mediterranean world from the 15th to the 12th century B.C. and played a vital role in the development of classical Greek culture. These two cities are indissolubly linked to the Homeric epics, the Iliad and the Odyssey , which have influenced European art and literature for more than three millennia. 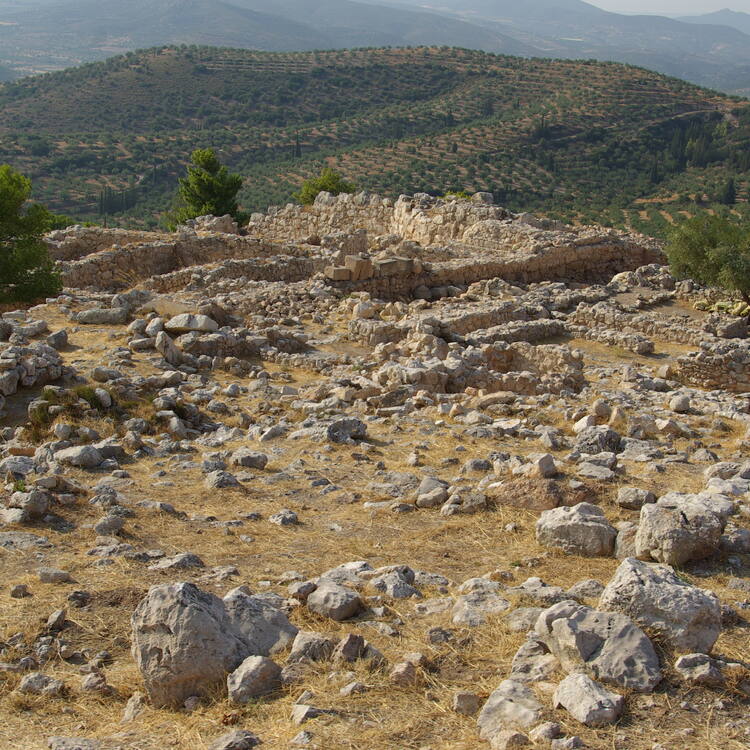 The Archaeological Sites of Mycenae and Tiryns, located in the Regional unit of Argolis in the North-East Peloponnese, are the imposing ruins of the two greatest cities of the Mycenaean civilization, renowned for its technical and artistic achievements but also its spiritual wealth, which spread around the Mediterranean world between 1600 and 1100 BC and played a vital role in the development of classical Greek culture. The palatial administrative system, the monumental architecture, the impressive artefacts and the first testimonies of Greek language, preserved on Linear B tablets, are unique elements of the Mycenaean culture; a culture that inspired the great poet Homer to compose his famous epic poems.

The citadel of Mycenae, with its strategic position for the control of the Argolid Plain, is the kingdom of the mythical Agamemnon and the most important and richest palatial centre of the Late Bronze Age in Greece. Its name was given to one of the greatest civilizations of Greek prehistory, the Mycenaean civilization, while the myths related to its history, its rulers and their family members (such as Klytaimnestra, Ifigeneia, Elektra, Orestes) have inspired poets, writers and artists over many centuries, from the ancient to the contemporary times. Significant stages in monumental architecture are still visible in the property, such as the massive defensive walls, the corbelled tholos tombs and the Lions Gate.

Tiryns, situated 20 km north-east of Mycenae on a low hill near the inlet of the Argolic Gulf, is another excellent example of the Mycenaean civilization. The fortification of the hill, completed at the end of the 13th century BC, surrounds the citadel with a total perimeter of approximately 750 m. The impressive walls, built of stones even larger than those of Mycenae, are up to 8 m thick and 13 m high. They can rightly be regarded as a creation that goes beyond the human scale, as reveals the word “cyclopean” – built by Cyclops, the mythical giants from Lycia – which was attributed to them in the Homeric epics.

Criterion (i): The architecture and design of Mycenae and Tiryns, such as the Lion Gate and the Treasury of Atreus and the walls of Tiryns, are outstanding examples of human creative genius.

Criterion (ii): The Mycenaean civilisation, as exemplified by Mycenae and Tiryns, had a profound effect on the development of classical Greek architecture and urban design, and consequently also on contemporary cultural forms.

Criterion (iii): Mycenae and Tiryns bear unique testimony to the political, social and economic development of the Mycenaean world, thus representing the peak of this early stage of Greek civilization.

Criterion (iv): Both sites illustrate in a unique manner the achievements of Mycenaean civilization in arts, architecture and technology, which laid the foundations for the evolution of later European cultures.

Criterion (vi): Mycenae and Tiryns are intricately linked with the Homeric epics, the Iliad and the Odyssey, which profoundly influenced European literature and arts for more than three millennia.

Both sites contain within their boundaries all the key attributes that convey their Outstanding Universal Value, bequeathing the spirit of the Mycenaean civilization from antiquity to the world of today. Their integrity is ensured primarily by the strict legal framework, which prohibits any construction within the boundaries of the sites and provides for the maintenance of the agricultural character of their surrounding area. Both sites are under the constant surveillance and monitoring of the Hellenic Ministry of Culture, Education and Religious Affairs. On-going archaeological research projects are conducted on both sites, aiming at further exploring the history and values of the property. These are carried out in a systematic way, taking into consideration all the international standards relating to archaeological fieldwork. The excavated monuments are building complexes or funerary monuments of big scale that are in a good state of preservation.  Thus the integrity of the property is not compromised by the excavations, as all the necessary conservation interventions are simultaneously undertaken.

The authenticity of both sites is unquestionable. Monuments of Mycenae maintain their authenticity since the various restoration works carried out in the past were based on the international standards for the intervention on monuments, on archaeological evidence and on architectural remains of the Mycenaean period. Special studies based on the principle of reversibility have preceded all interventions.

The authentic character of the citadel of Tiryns is also well preserved. The interventions that took place during the 1950’s were mild and compatible to the original building system. Moreover, restoration works carried out in 1998-2005 were based on the original construction methods, thereby preserving all the architectural elements of the Mycenaean period.

Both sites are protected under the provisions of the Greek Antiquities Law No 3028/2002, on the “Protection of Antiquities and Cultural Heritage in general”. The boundaries of the archaeological site of Mycenae and its buffer zone were established by Ministerial Decree No 2160 of 1964. Protection extends to the Citadel (Acropolis), the areas outside the walls and the wider surrounding area, including the natural environment of the site. The site of Tiryns is covered by Ministerial Decrees No 102098/4753 of 1956 and 12613/696 of 1991.

The property is under the jurisdiction of the Ministry of Culture, Education and Religious Affairs, through the Ephorate of Antiquities of Argolis, its competent regional service. In 1999, a scientific Committee for Mycenae was established, which carried out several projects of stabilization, conservation and enhancement of the site. Special attention was given to the accessibility of monuments by all visitors, and to other visitor’s facilities, such as an extensive network of pathways, stations and informative material.

The interpretation of the property is complemented by an archaeological museum, founded in 2003. Its collection comprises a great number of artefacts of Prehistoric and Historic times, giving special emphasis to the presentation of the Mycenaean period.

On both sites, systematic archaeological excavations are being carried out, while restoration works are conducted and others are scheduled. In Tiryns, the restoration project is jointly funded by the Greek state and the European Union. Restoration works in Mycenae, such as the restoration of the Tomb of the Lion, would further enhance the Outstanding Universal Value of the property, while the improvement of the network of ancient roads connecting Mycenae to other archaeological sites of the area (Heraion and Prosymna) would enhance our understanding of the broader area in antiquity.