Mystras, the 'wonder of the Morea', was built as an amphitheatre around the fortress erected in 1249 by the prince of Achaia, William of Villehardouin. Reconquered by the Byzantines, then occupied by the Turks and the Venetians, the city was abandoned in 1832, leaving only the breathtaking medieval ruins, standing in a beautiful landscape. 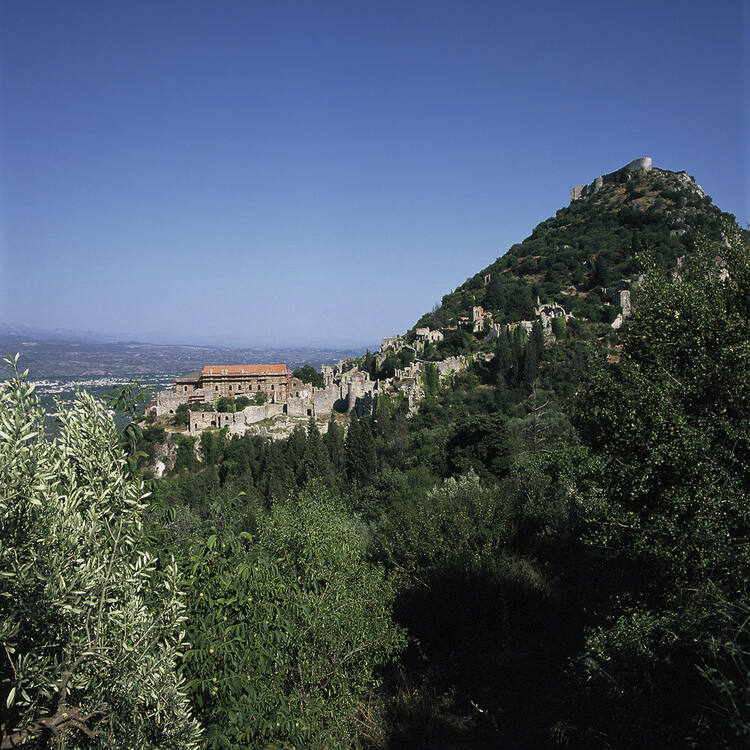 Mystras, the ‘wonder of the Morea’, lies in the southeast of the Peloponnese. The town developed down the hillside from the fortress built in 1249 by the prince of Achaia, William II of Villehardouin, at the top of a 620 m high hill overlooking Sparta. The Franks surrendered the castle to the Byzantines in 1262, it was the centre of Byzantine power in southern Greece, first as the base of the military governor and from 1348 as the seat of the Despotate of Morea. Captured by the Turks in 1460, it was occupied thereafter by them and the Venetians. After 1834 the inhabitants of Mystras gradually started to move to the modern town of Sparta leaving only the breath-taking medieval ruins, standing in a beautiful landscape.

Mystras, as the centre of Byzantine power, quickly attracted inhabitants and institutions; the bishopric was transferred there from Sparta, with its cathedral, the Metropolis or church of Hagios Demetrios, built after 1264. Many monasteries were founded there, including those of the Brontochion and the monastery of Christos Zoodotes (Christ the Giver of Life). Under the Despots, Mystras reached its zenith with the building of churches, outstanding examples of Late Byzantine church architecture, such as Hagioi Theodoroi (1290-1295), the Hodegetria (c. 1310), the Hagia Sophia (1350-1365), the Peribleptos (3rd quarter of the 14th century), the Evangelistria (late 14th – early 15th century) and the Pantanassa (c. 1430). The city was a major piece on the political chessboard of the time and was developed and beautified as befitted its role as a centre of power and culture. The city’s complex history is clearly evident in its fortifications, palaces, churches, convents, houses, streets and public squares.

Mystras’ distinct architecture is influenced by the so-called “Helladic” school of Byzantine architecture as well as the architecture of Constantinople. The painting of churches reflects the quality and the eclecticism of the art of Constantinople. Elements of Romanesque and Gothic art are also present as a result of the city’s wide range of contacts during the 14th and 15th centuries. The beauty of its churches, which during the Palaeologan Renaissance were covered with magnificent frescoes, the renown of its libraries and the glory of its writers, including the philosopher Georgios Gemistos Plethon and his pupil, the intellectual Bessarion, later cardinal of the Roman Catholic church, who brought neo-platonic humanism to Italy, gave substance thereafter to the legend of the Wonder of the Morea. Mystras is therefore a truly outstanding example of late Byzantine culture which influenced the rest of the Mediterranean world and beyond.

Criterion (ii): Mystras constitutes a medieval city whose art, the fruit of the so-called Palaeologan Renaissance, influenced the development of Late Byzantine and Post-byzantine art. The influence of the art of Mystras during the late and post Byzantine era is visible on a large number of monuments in the Peloponnese (such as Geraki, Mani, Longanikos, Leontari, Roinos) especially in painting. During the late Byzantine period the radiance of the art of the Despotate seems to influence the artistic streams which are developed throughout the Greek territory – including that of the Cretan School painting – always in combination with the powerful influence exerted by the art of Constantinople. This influence can be easily seen on the works of post-Byzantine painters, such as Xenos Digenis originating from the Despotate who was active in Crete, Aitolia, and Ipeiros or the family of Phokas in Crete and many others. The heritage of Mystras is apparent not only in architecture and painting but also in intellectual aspects. Distinguished intellectuals of Mystras, amongst them, Georgios Gemistos Plethon, the Neoplatonist philosopher, aroused the interest of the West for the interpretation of Platonic philosophy and the study of ancient Greek texts, thus contributing to the European Renaissance.

Criterion (iii): Mystras constitutes a unique example of a Byzantine city, an expression of flourishing urban society within the late Byzantine Empire. As a political and administrative provincial centre of the Byzantine state, Mystras became a unique intellectual, cultural and artistic centre.

Criterion (iv): Mystras is an exceptional example of a well-preserved fortified late-Byzantine city with elaborate spatial planning organization, and fortifications with the citadel on top of the hill and two fortified precincts at the lower level. The urban fabric of the city includes palaces, residences and mansions, churches and monasteries, as well as constructions related to the city’s water supply and drainage and to commercial and craft-based activities. Various architectural styles are applied in ecclesiastical architecture, but the so-called “mixed type of Mystras” (in which a three aisled basilica at ground level is combined with a five-domed cross-in-square at the level of the gallery) is dominant. The splendid complex of palaces, one of the few Byzantine survivals, the impressive mansions and the urban residences clearly demonstrate the high quality of life of the city’s inhabitants in the two last centuries of the Byzantine Empire.

Mystras was a living settlement from the 13th century to the 19th century when it gradually started to be deserted due to the foundation of the new town of Sparta. It retained its completeness as a fortified urban unit of the late-Byzantine period. The boundaries of the property include all the significant attributes. Its well-preserved monuments strongly demonstrate its importance as one of the most notable administrative and ecclesiastical centres of its era. Three of the most important religious monuments of Mystras, the Metropolis or church of Hagios Demetrios, Hodegetria and Pantanassa, maintain occasionally their religious use. Potential risks to the city are the impact of wind and rain, and there is some risk of earthquake.

Mystras constitutes a monumental late-Byzantine complex with distinct and well-preserved elements such as land-planning, street planning, secular and ecclesiastical architecture, and artistic production. Its authentic urban character, which has not been affected by human interventions, has been preserved through the centuries. The most important monuments on the site give the visitor the chance to perceive various aspects of the Byzantine culture. The restoration works on selected monuments on the site are carried out according to research and scientific studies and with the use of traditional techniques and materials and aim to restore the values represented.

The property is protected by the provisions of the Archaeological Law 3028/2002 “On the Protection of Antiquities and Cultural Heritage in general”, and by separate ministerial decrees, published in the Official Government Gazette. Protection and management are carried out by the Ministry of Culture, Education and Religious Affairs through the responsible regional service (Ephorate of Antiquities of Lakonia).

The “Committee for the Restoration of the Monuments of Mystras”, supervised by the Ministry of Culture, Education and Religious Affairs, has the responsibility to carry out restoration works on the monuments of Mystras and to promote the values of the property.

Since 1989 significant works have been carried out at the property including restoration work on the palaces and the residence of Laskaris; redisplay of the exhibits of the Museum of Mystras where selected items bear witness to the mutual relations between Mystras and Western Europe; reorganization of the archaeological store; creation of a sculpture exhibition at the northern atrium and the semi-open space of the Museum; conservation of the paintings and sculptures of the churches; installation of infrastructure works such as a water supply network, a sewage system, electricity in case of emergency; provision of visitor services and facilities including information signs, two ticket offices, drinking water facilities, lavatory facilities nearby the central entrance and a canteen outside the central entrance. In addition, there has been research on the architecture of the monuments and the spatial arrangement as well as conservation studies focusing on the mural, sculptural and floor decoration of the most important monuments of Mystras.

Visitor numbers are high especially during the summer period. There is also increased interest from schools and university students.

An events program, including information and educational events, musical and theatrical performances, exhibitions, educational programs and publications, supports the promotion and presentation of this property to the public and facilitates a multi-levelled approach by the public.

Prefecture of Laconia, Region of the Peloponnesos