The small hill town of Urbino, in the Marche, experienced a great cultural flowering in the 15th century, attracting artists and scholars from all over Italy and beyond, and influencing cultural developments elsewhere in Europe. Owing to its economic and cultural stagnation from the 16th century onwards, it has preserved its Renaissance appearance to a remarkable extent. 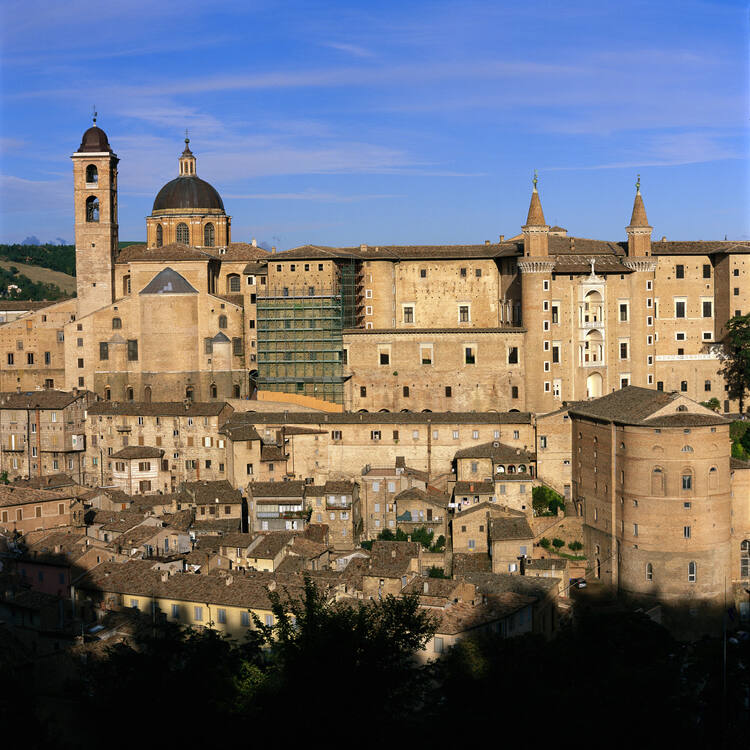 The small Italian hill town of Urbino became, for a short time during the Renaissance era, one of the major cultural centres of Europe. Today, the historic centre is defined by its Renaissance walls that survive virtually intact, complete with bastions. Within these walls, several buildings of extraordinary quality have been retained such as the Ducal Palace, the cathedral, the Monastery of Santa Chiara and a complex system of oratories.

The initial nucleus of the city evolved from a fortified Roman settlement dating from the 3rd and 2nd centuries BCE. The Romans built on the top of the hill where the Ducal Palace now stands and until the 11th century, the city remained within these limits. At the end of that century, its urban expansion required the construction of a new system of defensive walls. In the mid 15th century, Federico da Montefeltro undertook a radical rebuilding campaign within these original walls without disturbing the overall urban structure. The city was later further expanded to a second hill lying to the north, giving the area, now enclosed by the Renaissance walls an elongated outline.

Urbino is a small city in the hills that experienced an astonishing cultural flowering in the 15th century. During this period, it attracted artists and scholars from all over Italy and beyond which, in turn, influenced cultural developments elsewhere in Europe. Between 1444 and 1482, Federico da Montefeltro ruled in Urbino and his court brought together some of the era’s leaders: foremost humanists of the time such as Leone Battista Alberti, Marsilio Ficino, and Giovanni Bessarione; mathematicians like Paul van Middelburg; and artists such as Luciano Laurana, Francesco di Giorgio Martini, Paolo Uccello, Piero della Francesca and Ambrogio Barocci. These men created and implemented outstanding cultural and urban projects. This cultural climate made it possible for Raffaello, Donato Bramante and the mathematician Luca Pacioli to flourish in their own art and science.

Criterion (ii): During its short cultural pre-eminence, Urbino attracted some of the most outstanding humanist scholars and artists of the Renaissance, who created there an exceptional urban complex of remarkable homogeneity, the influence of which was carried far into the rest of Europe.

Criterion (iv): Urbino represents a pinnacle of Renaissance art and architecture, harmoniously adapted to its physical site and to its medieval precursor in an exceptional manner.

Urbino appears as a continuous and unified space defined today, as it has been for many centuries, by the Renaissance walls. Within these walls, a significant number of buildings from that era survive. Some demolitions occurred in the early 19th century, however, when the squares and roads were expanded. No major threats to the historic centre have been identified.

The authenticity of the Historic Centre of Urbino is high as it has retained much of its urban form in terms of street layout within the Renaissance walls. As a result, it has preserved its spatial characteristics and volumes, dating back to the older medieval layout, with its narrow streets, as well as to the subsequent Renaissance additions. Even the interventions from the 18th and 19th centuries left the Renaissance layout almost completely untouched. The building of a new theatre, designed by Vincenzo Ghinelli situated beside Francesco di Giorgio’s tower, was compatible in style and proportions with its neighbours.

Moreover, it has preserved its authenticity through the use of traditional and historical techniques and building materials in the maintenance and restoration work on buildings and in the public areas of the historic centre, preserving the formal characteristics, types and dimensions of existing architecture. The interventions in the town planning have never transformed the older constructions, perfectly complying with the urban landscape and the morphological conformation of the site.

The historic centre is regulated by national laws and by town planning and local building regulations.

National laws directly safeguard many individual monumental buildings in the historic centre as well as in the surrounding fortifications. The centre is also protected as a conservation area with a specific landscape protection planning control as well as an archaeology protection control.

Local town planning and building laws define the criteria and methods used for preserving the historic heritage. These standards and regulations guarantee the protection of the urban layout, architectural character, type of buildings, embellishments, and finishing techniques for building fronts. Specifically, the Municipality has undertaken a planimetric survey of all buildings in the historic centre, which made it possible to classify them according to type, degree of integrity and definition of permitted intervention limits. In addition to this inventory, detailed surveys of building façades along the main thoroughfares, together with painstaking archival research has provided documentary and methodological support for the planning of maintenance and restoration interventions to those façades.

The safeguarding of the landscape in support of the image of the historic centre is implemented through regulations for integral protection as laid down in the General Zoning Plan applied to the whole area of hills that can be seen from the circuit of the city walls. This area coincides with the buffer zone. Within this zone it is only possible to carry out requalification interventions to the plant and tree resources and to cultural and historic heritage, together with limited and properly calibrated interventions for the provision of underground parking to improve access to the historic area and to implement a definitive area for pedestrians only.

Based on these protection tools, all conversion works in the World Heritage property are subject to council planning permission, and to the specific opinion of the competent territorial office of the Ministry of Cultural Heritage and Activities. These procedures are in place to prevent any harm to the integrity of cultural heritage as well as any damage to the perspective, or light or any alteration to environmental conditions or decorative features.

The World Heritage property of Urbino is managed by a group of public entities working in different roles and at different levels. The Ministry for Cultural Heritage and Activities manages the safeguarding and conservation of cultural heritage through its competent offices. The city administration has the task of defining and putting strategies in place for conservation and management through town planning means, developing laws regulating activities within the site, and cultural promotion actions. Other bodies, such as the regional authorities, collaborate in protection, conservation and management activities as well as in promoting actions for capitalizing the town’s cultural heritage. The Archdiocese and the University of Urbino, as well as the Province of Pesaro and Urbino and the city administration play an essential role in maintaining and enhancing their heritage. The city administration is also responsible for developing, coordinating and implementing the Management Plan that was first approved in 2013. 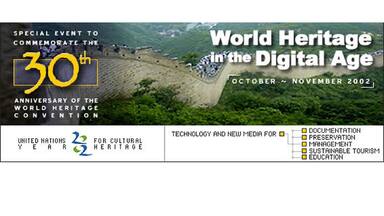 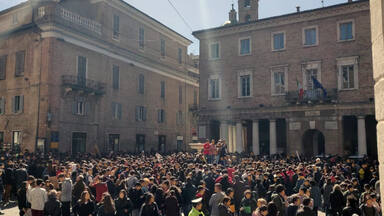 Improving the environmental, cultural and social sustainability of the Historic Centre of Urbino (Italy)
News