The Royal Exhibition Building and its surrounding Carlton Gardens were designed for the great international exhibitions of 1880 and 1888 in Melbourne. The building and grounds were designed by Joseph Reed. The building is constructed of brick and timber, steel and slate. It combines elements from the Byzantine, Romanesque, Lombardic and Italian Renaissance styles. The property is typical of the international exhibition movement which saw over 50 exhibitions staged between 1851 and 1915 in venues including Paris, New York, Vienna, Calcutta, Kingston (Jamaica) and Santiago (Chile). All shared a common theme and aims: to chart material and moral progress through displays of industry from all nations. 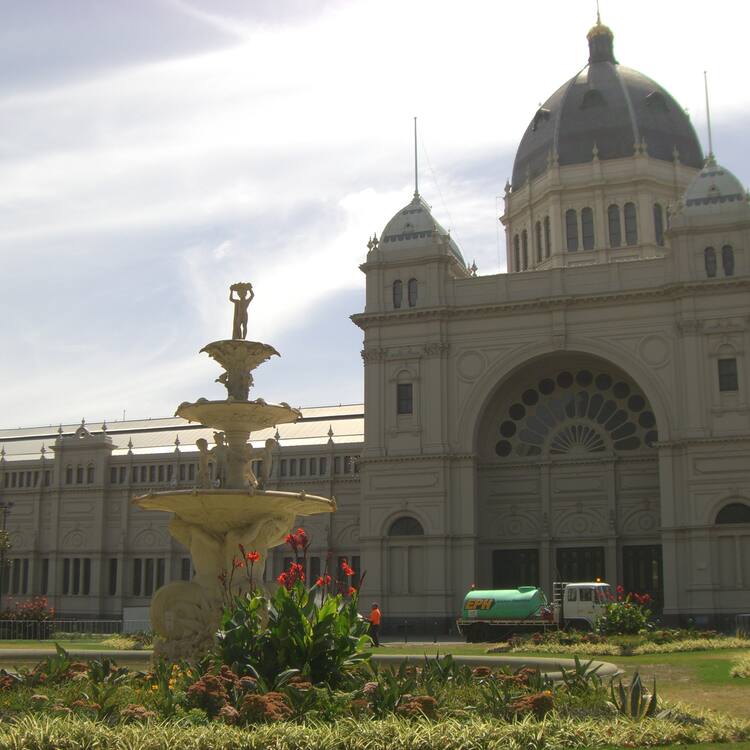 The site comprises three parcels of Crown Land in the City of Melbourne, being two Crown Land Reserves for Public Recreation (Carlton Gardens) and one dedicated to the exhibition building and the recently-constructed museum (Exhibition Reserve). The inscribed property consists of a rectangular block of 26 hectares bounded by four city streets with an additional 55.26 hectares in the surrounding buffer zone.

Positioned in the Exhibition Reserve, with the Carlton Gardens to the north and the south, is the Great Hall. This building is cruciform in plan and incorporates the typical architectural template of earlier exhibition buildings: namely a dome, great portal entries, viewing platforms, towers, and fanlight windows. The formal Carlton Gardens, with its tree-lined pathways, fountains and lakes, is an integral part of the overall site design and also characteristic of exhibition buildings of this period.

Criterion (ii): The Royal Exhibition Building and the surrounding Carlton Gardens, as the main extant survivors of a Palace of Industry and its setting, together reflect the global influence of the international exhibition movement of the 19th and early 20th centuries. The movement showcased technological innovation and change, which helped promote a rapid increase in industrialisation and international trade through the exchange of knowledge and ideas.

The completeness of the inscribed property has been retained with the same boundaries as set out in 1879. The Melbourne Museum was constructed in 1998-2000 to the north of the Royal Exhibition Building.

The present state of the conservation of the Great Hall is very good. Conservation work has recently been undertaken on the building’s dome and structure, the external joinery and stonework, and timber floors. Additionally, upgrades to building services have been completed. The scroll and parterre gardens on the southern side of the exhibition building, which were part of the 1880 Melbourne International Exhibition, have been restored. As part of the restoration of the 1880 German Garden, an extensive water harvesting and storage system has been installed that involved the installation of underground water tanks in the western forecourt to capture roof and surface runoff. The formal ornamental palace garden, being the southern part of the Carlton Gardens, provided the context for the Palace of Industry and is substantially intact in form including its treed avenues. These works contribute to maintaining the integrity of the Royal Exhibition Building and Carlton Gardens.

The property of the Royal Exhibition Building and Carlton Gardens has retained high authenticity of setting, maintaining its original form on the international exhibition site defined in 1879. The site is still surrounded by city streets and is edged by the bluestone plinth, the base of the iron railings that bounded the 1880 exhibition grounds.

The 1880 Great Hall survives substantially intact in its form and design, internally and externally. Authenticity of form is manifest in its survival as the only Great Hall from a major industrial exhibition of the late 19th and early 20th century. The east and west annexes, not part of the original design and intended to be of temporary use only, were demolished in the mid 20th century. Some modern interventions have been reversed including two structures attached to the north elevation in the 1960s and 1970s which were removed and the original structure repaired. Recent restoration works have included the reinstatement of missing ornamentation around the parapet line.

Interior spaces have been largely retained and are once again used for large-scale exhibitions demonstrating a relatively high authenticity of function within the Great Hall. Prompted by fire safety concerns, most of the original timber staircases were replaced by concrete early in the 20th century, an acceptable risk-sensitive reduction in material authenticity. In 1994, major restoration work included the reworking of the interior colour scheme to the documented era of 1901. The ornate internal paintings have mostly been replaced by the third decorative scheme of 1901, however, parts of the 1880 murals are still intact.

The museum’s construction removed part of the north garden although the surviving garden has retained its late 19th century layout. The original axial layout of the south garden survives with its formal paths, tree clumps and central avenues, lawn areas and two lakes (although reduced in size) and fountains. One fountain, the 1888 Westgarth Fountain, has been relocated.  A high number of the trees extant on the site are from the 1880s and 1890s layout. Restoration of garden pathways and plantings are based on research.

The property has effective legal protection and a sound planning framework. The management system takes into account a wide range of measures provided under planning and heritage legislation and policies of both the Australian Government and the Victorian Government. The Burra Charter principles support the Conservation Management Plan for the Royal Exhibition Building and Carlton Gardens and the World Heritage Environs Area Strategy Plan. Together these documents provide the policy framework for conservation and management. The property is maintained and preserved through regular and rigorous repair and conservation programs undertaken at all levels of government.

The Royal Exhibition Building is managed as an integral part of Museum Victoria, the state museum. The Carlton Gardens are managed by the City of Melbourne.

The Royal Exhibition Building and Carlton Gardens was included in the National Heritage List in 2004 under the Commonwealth Environment Protection and Biodiversity Conservation Act 1999 (EPBC Act) and on the State Heritage Register of Victoria in 1998 under the Heritage Act 1995. Inclusion in the National Heritage List requires that any proposed action to be taken inside or outside the boundaries of a National Heritage place or a World Heritage property that may have a significant impact on the heritage values is prohibited without the approval of the Federal Minister. Inclusion in the Victorian Heritage Register means that works inside the boundaries of the registered place are prohibited without approval under the Heritage Act 1995. 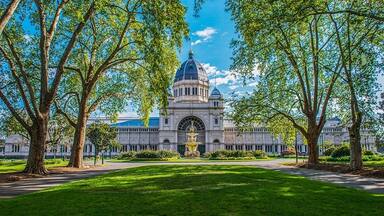