Kroměříž stands on the site of an earlier ford across the River Morava, at the foot of the Chriby mountain range which dominates the central part of Moravia. The gardens and castle of Kroměříž are an exceptionally complete and well-preserved example of a European Baroque princely residence and its gardens. 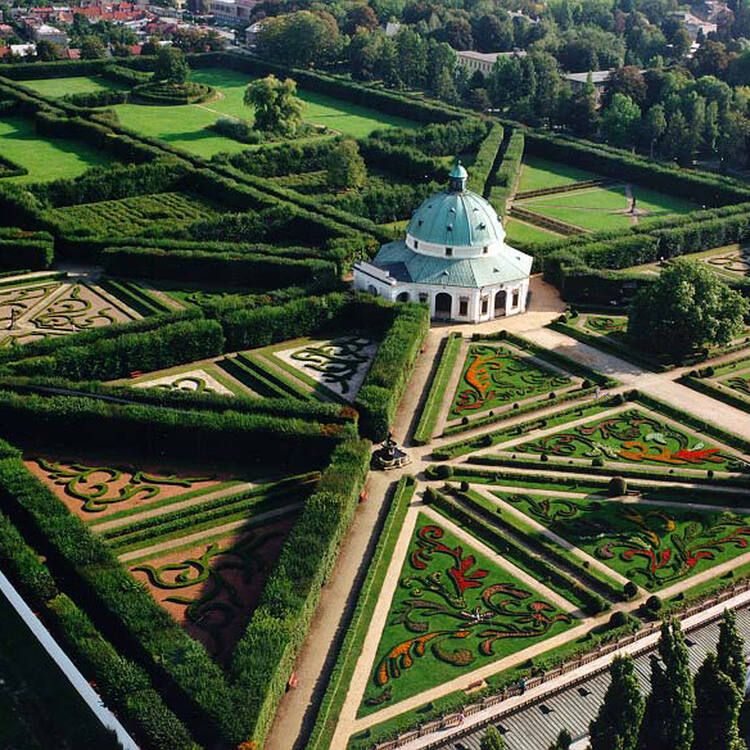 Gardens and Castle at Kromeríz

The ensemble formed by the archiepiscopal castle, an adjacent garden (Podzámecká zahrada) and a pleasure garden (Květná zahrada) situated nearby, is located in the historic centre of the town of Kroměříž, in the Zlín region of the Czech Republic.

The “Gardens and Castle at Kroměříž” illustrate a type of early Baroque architectural ensemble which introduced to central Europe, ravaged by war, high architectural values of Italian origin, linked with high-quality sculpture, paintings, and applied arts and enhanced by the acme of garden design in which the technological potential of the use of water was developed with virtuosity. The Castle Garden demonstrates, in an extraordinary way, the creative affinity between the garden art of central Europe and broader European trends in the design of landscape parks. The Pleasure Garden influenced Moravian garden design, whilst the influence of the Castle spread further, to the Danube region.

The “Gardens and Castle at Kroměříž” constitute a remarkably well preserved and basically unchanged example of a Baroque aristocratic ensemble (in this case the seat of an influential ecclesiastic) of residence and pleasure garden, with a larger park that reflects the Romanticism of the 19th century.

The monumental Baroque castle located in the northern part of the town centre is a free-standing edifice with four wings around a trapezoidal central courtyard. It contains richly decorated interiors, as well as valuable art collections. The castle is linked to the garden through spacious ground-floor rooms (sala terrena) with grottoes, one of them imitating a mine.

The Castle Garden with an area of 58 ha includes a number of exotic tree species (coniferous and deciduous) that stand isolated or in groups, as well as several important architectural elements. Among them, a semi-circular colonnade in classical style built in 1846 to house sculptures from Pompeii, after which it was named the Pompeian Colonnade. On the western periphery, the Max’s Farmstead is a luxurious building in French Empire style, with an impressive colonnade and projecting wings. Cast iron, produced at the archiepiscopal foundry, was used to build three elegant bridges: the Silver Bridge, the Vase Bridge and the Lantern Bridge. This garden, which was designed with a Baroque layout, was restyled under the influence of the Romantic landscape style of the late 18th and early 19th centuries.

The Pleasure Garden with an area of 14.5 ha is situated in the south-western part of the town centre. It is a formal garden in Italian style that is entered by a 244 m-long arcaded gallery with statues and busts on display, before it opens up onto the first section of the garden whose most striking feature consists in an octagonal rotunda. Geometrical parterres, symmetrically arranged around the rotunda, include mazes and flower beds defined by low espalier hedges. This part of the garden leads to a section whose main features include two low mounds with arbours and two rectangular basins that are aligned symmetrically on both sides of the main axis of the garden. This section allows access to the aviary and to the beautiful greenhouses by a spiral path. The design and the appearance of the Pleasure Garden (1665-1675) remained almost intact, making it an extremely rare example of a Baroque garden.

Criterion (ii): The ensemble at Kroměříž, and in particular the Pleasure Garden, played a significant role in the development of the design of Baroque gardens and palaces in central Europe.

Criterion (iv): The Gardens and Castle at Kroměříž are an exceptionally complete and well-preserved example of a princely residence and its associated landscape of the 17th and 18th centuries.

The property includes all the key elements that convey its Outstanding Universal Value, i.e. the former Baroque residence and both gardens. Its delimitation and size are appropriate. None of the attributes of the property are threatened. The castle and its adjacent garden, as well as the Pleasure Garden are located in the territory of the urban heritage reservation, which comprises a buffer zone. In the territory of the property and its buffer zone, no change is expected in the urban development. The visual integrity of the property is not threatened. In accordance with the existing regulations and with the applicable land use plan, any risk of new construction in the buffer zone is subject to a preliminary review by competent authorities, including those responsible for state heritage preservation.

The degree of authenticity of this ensemble is high. In fact, the original design and decorations of the castle have been preserved to a very high extent. Currently, the two gardens are regaining their original appearance and their splendour through restoration and rehabilitation based on in-depth technical studies. All these restoration works are carried out in accordance with recognized heritage conservation practices, and historical materials and construction techniques are used. These principles are also applied to the two gardens, thus guaranteeing the preservation and protection of their authenticity.

The protection of the property is governed by the Act No. 20/1987 Coll. on State Heritage Preservation as amended. The gardens and the castle are designated national cultural heritage sites and thus enjoy the highest level of legal protection as far as heritage preservation is concerned. The ensemble is also covered by Decree No. 1589/78 VI/1 of the Ministry of Culture, which designated the historic centre of Kroměříž as an urban heritage reservation. The buffer zone is defined in accordance with existing regulations and it is identical to the urban heritage reservation.

The archiepiscopal castle and the adjacent Castle Garden (Podzámecká zahrada) are owned by the Roman Catholic Church, represented by the Archbishopric at Olomouc. The Pleasure Garden (Květná zahrada) is owned by the Czech State represented by the state-funded institution, i.e. the National Heritage Institute. The Management Plan of the property is in place and is scheduled for regular updates. The responsibility for the property management goes to the relevant owners, to specific organizations that have been established for this purpose. These bodies are also responsible for the conservation schedule of the property, for its maintenance, functioning and promotion. Their activities are funded by their budgets and by special-purpose financial instruments, such as grant schemes and funding through the programme of the Ministry of Culture of the Czech Republic allocated to the conservation of the immovable cultural heritage, as well as financial resources allocated from other public budgets. As regards to heritage conservation, the property is in good condition.