The List Cultural and Historic Ensemble of the ...
Print

The Solovetsky archipelago comprises six islands in the western part of the White Sea, covering about 300 km2 . They have been inhabited since the 5th century B.C. and important traces of a human presence from as far back as the 5th millennium B.C. can be found there. The archipelago has been the site of fervent monastic activity since the 15th century, and there are several churches dating from the 16th to the 19th century. 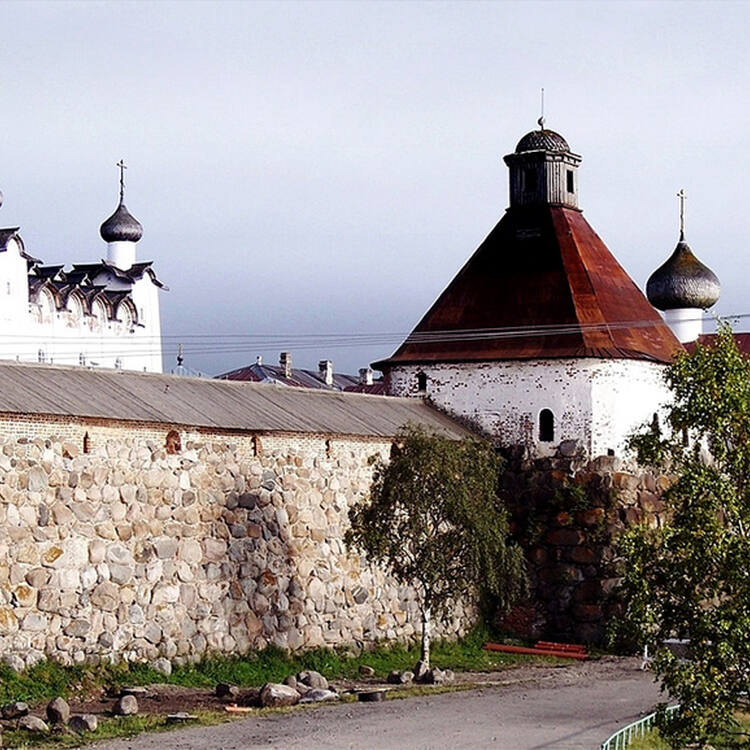 Cultural and Historic Ensemble of the Solovetsky Islands © Jacopo

Founded in the 1430s, the Solovetsky complex is an outstanding example of the tenacity, courage and diligence of monks of the Russian Orthodox Church in the inhospitable environment of Northern Europe. The complex is unique in its integrity and safeguarding of its religious, residential, domestic, defence and waterside constructions, its road network and irrigation systems of the Middle Ages harmoniously blended with the surrounding natural and cultural landscapes as well as archeological sites that reflect the ancient and medieval culture of the islands for six thousand years. The Solovetsky complex represents all periods of the history of the archipelago and the Russian North in general.

The heart of the historic and cultural complex of the archipelago is the architectural ensemble of the Solovetsky Monastery, which is a holistic unique architectural complex. Its constructions are characterized by their monumentality, individuality and integrity of all components resulting from the centuries-old tradition of building.

The Solovetsky historic and cultural complex is the only large set of monuments in northern latitudes, built from local boulders in combination with rare brick and forge iron produced on Solovki. The peculiar linear design of the facade and high density of buildings on small areas contribute to the integrity and architectural expression of the ensemble. The fortress is the only Russian fortification complex built with the use of large boulders, which adds greatly to its individuality.

The vast variety and uniqueness of the Solovetsky monuments together with the northern wilderness create a rare cultural and natural synthesis. Archeological studies over the last 20 years have identified some interesting new materials that expand the cultural context of the property.

The Solovki is often recognized by the public as one of the first and best known Soviet special purpose camps of the GULAG. The islands have been used as a place of exile since the 17th century.

Criterion (iv): The Solovetsky complex is an outstanding example of a monastic settlement in the inhospitable environment of northern Europe, which admirably illustrates the faith, tenacity and courage of late medieval religious communities. The subsequent history of the monastery is graphically illustrated by the wealth of remains of all types that have survived.

All the identified attributes are within the property boundaries, which include the whole territory of the archipelago.

A number of the site’s elements (buildings and structures) have been rehabilitated in the process of restoration and other works for the conservation of the cultural heritage, works which have revealed its values as a whole. However, these large-scale works, under certain conditions, can have a negative impact on the Outstanding Universal Value of the site, and so can active development of the archipelago area, especially in the vicinity of the protected historical and cultural monuments.

The site is exposed to the severe subpolar climate. The specific ground conditions together with the abundance of water (lakes and swamps) and high humidity create difficult conditions for the site’s preservation, which is why programs for current monitoring of buildings and constructions have been developed. Special engineering maintenance of the structures as well as mandatory archaeological research are provided by restoration projects.

The elements of the site fully represent the Outstanding Universal Value of the property. The level of authenticity of the preserved buildings is high. Archaeological research is a mandatory step in implementation of preservation activities on cultural heritage sites.

Restoration and research activities carried out on the archipelago have had a positive effect on the Outstanding Universal Value of the property.

Sacred service has been brought back to the cathedrals and this fact has contributed to better perception of the heritage site by visitors.

The possession of most of the buildings is delivered to the Solovetsky Saviour Transfiguration Monastery, and they are used according to their original purpose. Some buildings are used by the Solovetsky historical, architectural and natural museum-reserve.

At present, the World Heritage Site is managed under the following documents at the level of the Russian Federation:

- Article 44 of the Constitution of the Russian Federation adopted by national vote on December 12, 1993;

- Resolution of the Council of Ministers of the RSFSR No.1327 dd. August 30, 1960 “On Further Improvement of Cultural Monuments Protection in the RSFSR”. Under this normative legal act, the objects forming an integral part of the Solovetsky Monastery Architectural Ensemble are recognized as Cultural Heritage Sites;

- Order of the Ministry of Culture of Russia No. 1467 dd. November 27, 2012 on registration of the Solovetsky Monastery Ensemble and separate structures of the Solovetsky Archipelago Islands in the Unified State Register of Cultural Heritage Sites (historical and cultural monuments) of the Peoples of the Russian Federation;

- Decree of the Government of the Russian Federation No. 1939-r dd. October 1, 2014 “On approval of the set of organizational measures on the Solovetsky Archipelago preservation and development”. These measures will be implemented by responsible federal executive authorities within the limits of the federal funds;

- Order of the Ministry of Culture of Russia No. 2333 dd. December 24, 2013 “On approval of the protection zones boundaries of the Cultural Heritage Sites of federal significance forming part of the Cultural Heritage Site of federal significance “The Ensemble of the Solovetsky Monastery and separate structures of the Solovetsky Archipelago Islands, the XVI century – first half of the XX century” added to the World Heritage List (Solovetsky settlement, Primorsky district, Arkhangelsk region), as well as requirements to lands use policies and urban planning regulations within the boundaries of these zones”;

- Order of the Ministry of Culture of Russia No. 946 dd. June 3, 2014 “On approval of the protection zones boundaries of the Cultural Heritage Sites of federal significance forming a part of the Cultural Heritage Site of federal significance “The Ensemble of the Solovetsky Monastery and separate structures of the Solovetsky Archipelago Islands, the 16th century – first half of the 20th century” added to the World Heritage List (Arkhangelsk region, Primorsky district, Bolshoy Solovetsky island, Bolshaya Muksalma island, Anzer island and Bolshoy Zayatsky island), as well as requirements for lands use policies and urban planning regulations within the boundaries of these zones”;

- Concept of preserving the Cultural Heritage of the Solovetsky Archipelago developed by the federal state unitary enterprise “Central Scientific-Restoration and Design Workshops” in 2013-2014 (on request of the Ministry of Culture of Russia) and approved by the resolution of the Board of the Russian Ministry of Culture on June 25, 2014 (Minutes No. 14). This includes status analysis and main issues in regard to the preservation of cultural heritage sites situated in the territory of the Solovetsky Archipelago and proposals on the order, terms and procedures of restoration activities.

In addition, a number of fundamental documents have been adopted at the level of the subject of the Russian Federation – Arkhangelsk region:

State institutions, the Russian Orthodox Church and the public of Russia work together to preserve and restore the Solovetsky Monastery Architectural Ensemble as a whole.

Proper coordination of all actions of the branches of government and the Russian Orthodox Church for the purpose of preservation and up-to-date development of the Archipelago as an integral site of the historical, cultural, natural and spiritual heritage is achieved through the application of the program-target method. Targeted programs (federal, regional, municipal) in accordance with the competence and established sphere of jurisdiction allow the development and reconciliation of the priorities of the federal, regional and local levels as well as relations between the state and the church; the accumulation and best use of resources to address the problems of the Solovetsky Archipelago development; and the evaluation of the effectiveness of the program measures through use of indicators and indices.

The Government of the Russian Federation through the Ministry of Culture of Russia provides long-term federal financing of the restoration works to the World Heritage property within the framework of the Federal Target Program “Culture of Russia (2012-2018)” (approved by the Resolution of the Government of the Russian Federation No. 186 dd. March 3, 2012) in accordance with the annual list of sites proposed by the Russian Orthodox Church for financing after its approval by the Patriarch of Moscow and All Russia. Restoration activities on the Solovetsky Islands are arranged and carried out in accordance with the Concept of preserving the Cultural Heritage of the Solovetsky Archipelago and the Action Plan up to 2018.

All the works being undertaken are aimed at scientific restoration with the recovery of the Cultural Heritage Sites’ historical functions.