'San Gimignano delle belle Torri' is in Tuscany, 56 km south of Florence. It served as an important relay point for pilgrims travelling to or from Rome on the Via Francigena. The patrician families who controlled the town built around 72 tower-houses (some as high as 50 m) as symbols of their wealth and power. Although only 14 have survived, San Gimignano has retained its feudal atmosphere and appearance. The town also has several masterpieces of 14th- and 15th-century Italian art. 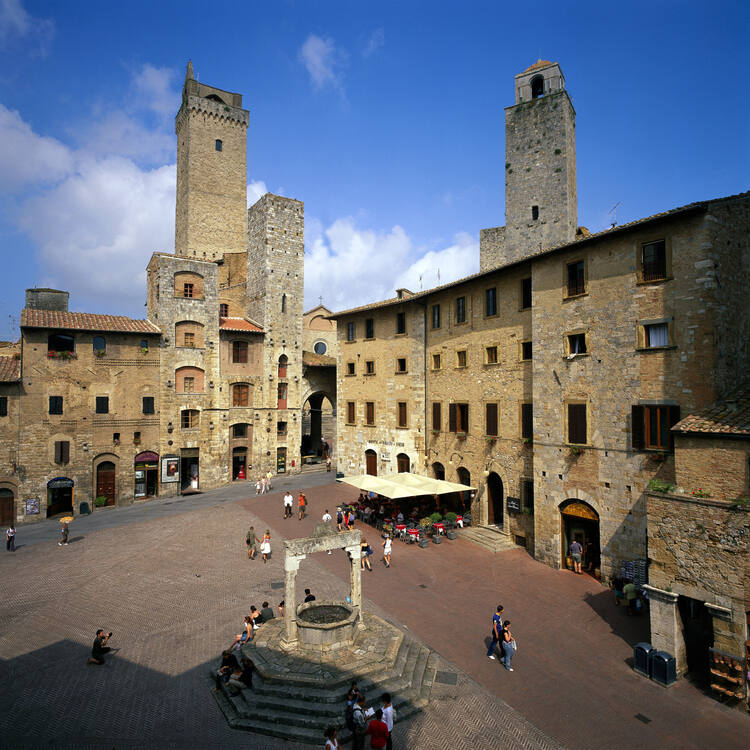 The Historic Centre of San Gimignano sits on a height of land, dominating the surrounding landscape. During the Middle Ages, its location in Val d’Elsa, 56 km south of Florence, provided an important relay point for pilgrims travelling to or from Rome on the Via Francigena. The town became independent in 1199 and between the 11th and the 13th century the noble families and upper middle-class merchants who controlled the free town built many fortified tower houses (probably 72) as symbols of their wealth and power. The town grew around two principal squares: the triangular Piazza della Cisterna, ornamented with a lovely central well, and the Piazza Duomo, dating from the late 13th century with its more intricate layout containing the majority of public and private monuments. After 1353, the town went into a period of decline due to waves of famine and plague that caused a drastic decrease in population. Within a hundred years, the town was downgraded to the level of the other lands under the Florentine control. This status, however, prevented the town from the urban renewal that transformed many Italian historical towns after the Middle Ages.

While only 14 of the original tower houses have survived, San Gimignano has retained its feudal atmosphere and appearance, embellished with several notable palaces during the 12th and 14th century. The town also has several masterpieces of Italian art dating to the 14th and 15th centuries. These are found in the cathedral as well as in other prominent religious and public buildings.

The Historic Centre of San Gimignano is a cultural site of exceptional value, since it has treasured its architectural homogeneity and its original urban layout. The buildings within the town’s double wall provide a shining example of medieval architecture with influences of Florentine, Sienese, and Pisan styles from the 12th to the 14th century.

Criterion (i): The Historic Centre of San Gimignano contains a series of masterpieces of 14th and 15th century Italian art in their original architectural settings, including: in the Cathedral, the fresco of The Last Judgment, Heaven and Hell by Taddeo di Bartolo (1393), The Martyrdom of St. Sebastian by Benozzo Gozzoli (1465) and above all the magnificent frescoes by Domenico Ghirlandaio such as the cycle of Santa Fina (1475) and the Annunciation in the Baptistery (1482). Other works of the same outstanding beauty include the huge frescoes by Benozzo Gozzoli depicting St. Sebastian (1464) and St. Augustine (1465).

Criterion (iii): San Gimignano bears exceptional testimony to medieval civilization since it groups together within a small area all the structures typical of urban life: squares and streets, houses and palaces, as well as wells and fountains. The frescoes by Memmo di Filippuccio commissioned by the township in 1303 to decorate the chambers of the Podestà in the Palazzo del Popolo are among the most frequently reproduced documents used to illustrate daily life of the early 14th century, down to its most domestic details.

Criterion (iv): The urban landscape of Florence, dominated by the towers of its public palazzos (Palazzo del Podestà and Palazzo della Signoria), shows that its public institutions prevailed over personal power. After 1250, the height of family tower houses was periodically reduced in the city. Whereas in San Gimignano, whose incastellamento goes back to 998, the 14 towers proudly rising above its palaces, preserve the look of a feudal Tuscan town controlled by rival factions ever ready for conflict. It illustrates a significant moment in history which cannot be found to the same extent in Florence, Sienna or Bologna despite the quality of their monuments.

The perimeter of the property is defined by two concentric rings of defensive walls. The inner ring was constructed in the late 10th century and in the 13th century it was reinforced with the construction of the outer wall. Inside, the medieval town contains all the elements that contribute to its Outstanding Universal Value: towers and tower houses, noble palaces rich in stone and terracotta decorations, late Roman churches, as well as the urban pattern of streets. Moreover, the urban fabric perfectly combines with a precious system of orchards set along secondary streets and building-free zones, which complement the late medieval urban layout. The unique skyline of the town, loftily perched in a dominant position, can be enjoyed from the main visual cones. Despite social transformation due to development over the last 60 years, the historical centre still retains the same ancient traditions, based on lively social dynamics.

The property is vulnerable to the effects of increasing tourism and the related pressure on modifications to the traditional use of buildings. Opportunities exist for the adaptive reuse of current vacant sites of the former prison and convent of San Domenico. In addition, the historic town is under risk of seismic activity in the region and landslides on the hill.

San Gimignano’s setting on a height of land continues to dominate the surrounding countryside. It has preserved its authenticity thanks to the strict enforcement of the restoration principles. The interventions on monuments and buildings respect the main features of cultural heritage, architecture, history and art. Specifically, the historic centre has maintained intact spaces, volumes and decorations within the medieval layout, due to current regulations which strictly forbid replacements of and alterations to historic buildings. Moreover, only traditional materials and techniques are used.

Over time, modifications have been made to the use of many of the historic buildings, some of which now support the tourist industry.

There are various legal protection instruments on different levels. At the national scale, the historic buildings and landscape of the property is subjected to national rules on protection and preservation of cultural heritage (“Codice dei beni culturali e del paesaggio” – Code of cultural heritage and landscape). Under these regulations, any interventions are subjected to the approval of Ministero per i Beni e le Attività culturali (Ministry of Cultural Heritage and Activities), whose peripheral offices verify if the works are compatible with the preservation criteria.

At the municipal level, the town plan (Piano Strutturale 2007) and its enforcement instruments set detailed regulations for public and private interventions regarding the historical centre and the landscape of San Gimignano. These rules are designed to protect and enhance the historic urban fabric and the original town settlement. Specifically, this means that inside the historic centre the only interventions allowed are the ones focused on the preservation and rescue of the typical, morphological and formal features of the existing buildings and their setting as well as of all the elements that contribute to the definition of the town’s identity. Moreover, the municipal administration has added several rules to regulate and control any transformations in the historical centre, notably concerning tourism, trade, posting of advertisements, traffic, noise and electromagnetic pollution, use of public ground, etc.). In particular, in order to fight against the impact of massive tourism and in terms of change to urban functions and decorations, the municipal administration has promoted strict rules to prevent modifications of intended use and transformations in the appearance of business premises.

San Gimignano is managed by a multidisciplinary team representing different levels of government coordinated by the municipal administration. This group includes the Ministry of Cultural Heritage and Activities (Ministero per i Beni e le Attività Culturali), responsible for the protection and preservation of cultural heritage, and the municipal administration that defines and carries out strategies for preservation and management using town planning instruments and regulations. The other local bodies (Region and Province) contribute to the protection, preservation and management of the cultural heritage, and promote enhancement activities. 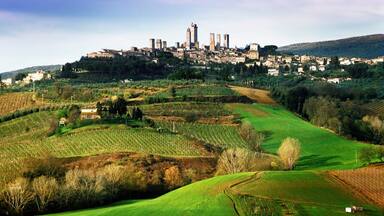 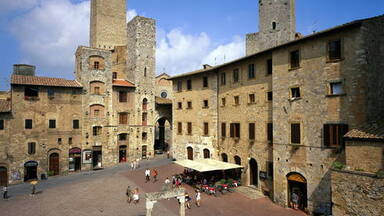