The List The Sassi and the Park of the Rupestrian ...
Print

This is the most outstanding, intact example of a troglodyte settlement in the Mediterranean region, perfectly adapted to its terrain and ecosystem. The first inhabited zone dates from the Palaeolithic, while later settlements illustrate a number of significant stages in human history. Matera is in the southern region of Basilicata. 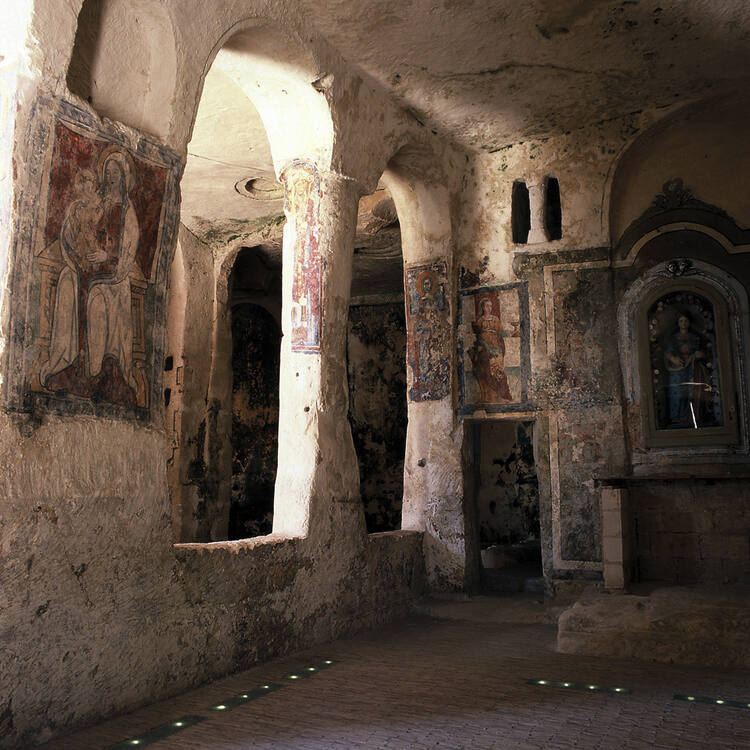 Located in the southern Italian region of Basilicata, The Sassi and the Park of the Rupestrian Churches of Matera comprises a complex of houses, churches, monasteries and hermitages built into the natural caves of the Murgia. Covering an area of 1,016 ha this remarkable and intact troglodyte settlement contains more than a thousand dwellings and a large number of shops and workshops. The property was first occupied during the Palaeolithic period and shows evidence of continuous human occupation through several millennia until the present day, and is harmoniously integrated into the natural terrain and ecosystem.

The site is composed of the ancient districts of the city of Matera and of the Park of the Rupestrian Churches which stretch over the Murgia, a calcareous highland plateau characterized by deep fault fissures, ravines, rocks and caves. The morphology of the territory, characterized by deep ravines (gravine) and bare highland plateaus, integrated with ancient cave churches, shepherd tracks marked by wells, and fortified farmhouses, form one of the most evocative landscapes of the Mediterranean.

The site was first occupied from the Paleolithic to the Neolithic era with occupation of the natural caves intensifying from the 8th century, when the city started to overshoot the boundaries of the defensive walls dated to the Roman Age and constructed all around the part of the city called Civita, which was the first inhabited nucleus. The earliest houses in the settlement were simple caves enclosed by a wall of excavated blocks on the two grabiglioni, Sasso Caveoso and Sasso Barisano. A Romanesque cathedral was built on the Civita between the two Sassi in the 13thcentury.

The historic centre retains the distinction of these the two districts, the Barisano and Caveoso, and also includes the 15th century Casalnuovo district and the 17th-18th century backbone of the city called “Piano”.

Criterion (iii): The Sassi and the Park of the Rupestrian Churches of Matera represent an outstanding example of a rock-cut settlement, adapted perfectly to its geomorphological setting and ecosystem and exhibiting continuity over more than two millennia.

Criterion (iv): The town and park constitute an outstanding example of an architectural ensemble and landscape illustrating a number of significant stages in human history.

Criterion (v): The town and park represent an outstanding example of a traditional human settlement and land-use showing the evolution of a culture which has maintained a harmonious relationship with its natural environment over time.

The World Heritage property includes the Sassi of Matera and the Park of the Rupestrian Churches, which together encompass the characteristic cultural features, sites and monuments that underpin the Outstanding Universal Value of the property. This includes the ancient urban centre and the highland plateau on the opposite side of the ravine which show evidence of human settlement for over 2000 years.

There is a designated buffer zone around the World Heritage property to protect the immediate surroundings of Sassi from insensitive development.

The Sassi and the Park of the Rupestrian Churches of Matera hold a high degree of authenticity. The rock-cut settlement exhibits evidence of continuous occupation from prehistoric times until the mid-twentieth century. There was some interruption when the entire population of the Sassi was relocated in the 1950s. The evacuation was undertaken in order to improve sanitation and renovate the ancient districts. While the abandonment of the area led to some degradation, the return of people from the 1980s has restored the traditional use and function of the property, and rejuvenated the spirit and feeling of the place.

The Sassi and the Park of the Rupestrian Churches property is bound by the national regulation for the protection and conservation of the cultural heritage (D.lgs 42/2004, code of the cultural heritage and the landscape). This national regulation requires the prior approval of the relevant Soprintendenze of the local Offices of the Ministry for Cultural Heritage and Activities, for any intervention or activity impacting the property.

Most of the historical area is owned by the State and leased to the Municipality of Matera under Law 771/1986. The law delegates direct responsibility for the management of the historical area to the Municipality. Law 771/1986 established two urban plans for the appropriate use of the area. These define the rules and methods for interventions and for authorized leasing, to safeguard the architectural, urban, environmental and economic recovery of the Sassi districts and the highland plateau. The second plan has a particular emphasis on residential development as a means to rehabilitate the Sassi and reestablish a local residential population.

The Municipality established a special department, “Ufficio Sassi,” in collaboration with several local offices of the Ministry for Cultural Heritage and Activities, to manage the planning of the World Heritage property. The Sassi Office undertakes a range of activities including ensuring adherence with building trade regulation for both public and private buildings within the World Heritage property; administration of Italian state-owned buildings; allocation of taxes for the restoration of private and public buildings and monuments; as well as the identification of historic documentation to enhance knowledge of the site.

The Municipality of Matera has other offices that deal with tourism and culture which, in collaboration with the Sassi Office, identify and put into practice strategies for the tourist access and cultural celebration of the site.

The special Law 771, led to the establishment of a management plan between private and public parties to ensure the architectural, urban, environmental and economical conservation of the ancient Sassi districts and to safeguard the Murgia highland plateau.

The property has further regional protection through Law 11/1990 of the Region Basilicata. The law created the Institution of the Archaeological Historic Natural Park of the Rupestrian Churches of Matera. This institution provides protection for some 6,500 ha to effectively protect the natural open space and archaeological sites of the Murgia, including the recovery and valorization of areas of prehistoric and historic archaeology. This law further provides for the protection, conservation, safeguarding, valorization and management of the rupestrian habitat, of the natural ecosystems, biotic communities and their habitat, biotypes and the relevant geological, geomorphologic and speleological formations, watercourses and related hydrological systems. Furthermore, the law makes provision for education and promotion of conservation activities that promote and facilitate the organization of tourism other economic and productive sustainable development of the Park. It makes further provision for the conservation of the anthropological aboriginal values, with particular reference to the rural settlements. These provisions are integrated into the plan for the Park regulated by the same regional law.

The Park of the Rupestrian Churches has additional protection under Regional Law 2/1998 which makes provision for collaboration with the management body of the Park, which plans and carries out the necessary activities and interventions to implement the plans for the Park.

There is a need for vigilance in respect to development in the buffer zone between I Sassi and the modern town of Matera to ensure that there is no negative impact on the ancient quarters. Increasing tourism to the site may also have negative impacts on the presentation and ambience of the property and should be governed through the visitor management.