The largest group of religious monuments and megalithic sculptures in South America stands in a wild, spectacular landscape. Gods and mythical animals are skilfully represented in styles ranging from abstract to realist. These works of art display the creativity and imagination of a northern Andean culture that flourished from the 1st to the 8th century. 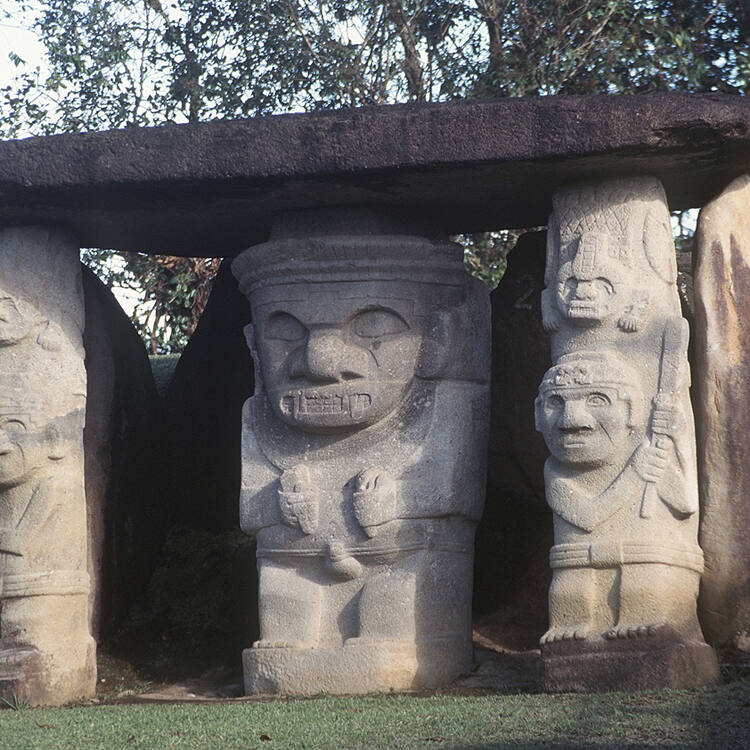 The San Agustín Archaeological Park is located in the Colombian Massif of the Colombian southwestern Andes, on terrains of the municipalities of San Agustín and Isnos, in the department of Huila. Three separate properties, totalling 116 ha, comprise the Archaeological Park: San Agustín (conformed by the Mesita A, Mesita B, Mesita C, La Estación, Alto de Lavapatas and Fuente de Lavapatas sites), Alto de los Ídolos and Alto de Las Piedras. The park is at the core of San Agustín archaeological zone featuring the largest complex of pre-Columbian megalithic funerary monuments and statuary, burial mounds, terraces, funerary structures, stone statuary and the Fuente de Lavapatas site, a religious monument carved in the stone bed of a stream.

The ceremonial sites are at the centre of settlement concentrations and contain large burial mounds connected to one another by terraces, paths, and earthen causeways. The earthen mounds, some measuring 30 m in diameter, constructed during the Regional Classic period (1-900 AD) covered large stone tombs of elite individuals of the well documented chiefdom societies that developed in the region since around 1000 BC--one of the earliest complex societies in the Americas. The tombs contain an elaborate funerary architecture of stone corridors, columns, sarcophagi and large impressive statues depicting gods or supernatural beings, an expression of the link between deceased ancestors and the supernatural power that marks the institutionalization of power in the region. In the municipality of San Agustin the main archaeological monuments are Las Mesitas, where the ancestors constructed artificial mounds, terraces, funerary structures and stone statuary; the Fuente de Lavapatas, a religious monument carved in the stone bed of a stream; and the Bosque de Las Estatuas, where there are examples of stone statues from the whole region. The Alto de Los Idolos is on the right bank of the Magdalena River and the smaller Alto de las Piedras lies further north: both are in the municipality of San José de Isnos. Like the main San Agustín area, they are rich in monuments of all kinds. Much of the area is a rich archaeological landscape, with evidence of ancient tracks, field boundaries, drainage ditches and artificial platforms, as well as funerary monuments. This was a sacred land, a place of pilgrimage and ancestors worship. These hieratic guards, some more than 4 m high weighing several tonnes, are carved in blocks of tuff and volcanic rock. They protected the funeral rooms, the monolithic sarcophagi and the burial sites.

The monuments are located at the political and demographic centers of chiefdom societies that consolidated their power through complex ceremonial activities and the production of knowledge. San Agustín chiefdoms and the outstanding statuary of their tombs represent an exceptional trajectory of political centralization amidst a rugged environment and without the concentration of economic wealth, and as such are of great scientific and aesthetic importance.

Criterion (iii): The wealth and concentration of elaborate monumental burials and associated megalithic statuary from the sites in San Agustín Archaeological Park bears vivid witness to the artistic creativity and imagination of a prehispanic culture that flowered in the hostile tropical environment of the Northern Andes. It symbolizes the ability of pre-Hispanic societies of northern South America to create and express in stone and earth his unique form of social organization and worldview.

The San Agustín Archaeological Park includes four separate sites, with boundaries defined so as to include the main concentrations of burial mounds with megalithic statues of the Regional Classic (1-900 AD) period. A third of the 600 known San Agustín statues and half of 40 known monumental burial mounds that are dispersed throughout the Alto Magdalena region are located inside the boundaries of the archaeological park. These 20 burial mounds include the largest and also the most elaborate examples. At the “Mesitas” site, 80 ha of the park includes 8 mounds, more than a hundred statues and the entire core of the largest demographic and ceremonial centers, containing not only the oldest and largest tombs--Mesita A and Mesita C--sites, but also the residential remains of the elite families that ruled over their society, constructed the monuments and used them as burials for their main leaders. Thus, the park includes not only a series of separate monuments but also the vestiges of the central communities that constructed and lived beside them. In spite of the impacts of natural phenomena on the material remains, conservation actions have preserved their material integrity. Challenges remain in maintaining the integrity of such a vast area in light of pressures for extended agricultural use and growth of local communities.

The San Agustín archaeological sites were abandoned around 1350 AD and rediscovered during the 18th and 19th centuries, which led the looting and disturbance of most of the  monumental tombs while looking for grave goods which proved to be very scant. Erosion, earthquakes and human intervention displaced stone slabs and the contents of many tombs, but this did not destroy the original funerary architecture. The main values of the San Agustin monuments, expressed in the megalithic stone elements, funerary layout and stone carvings and painting, have been preserved, as well as the original construction techniques and associated archaeological deposits.  Direct intervention is limited to research and conservation requirements. Even though the sites suffered long ago from looting, the early creation of the park in 1931 provided a stable adequate protection for the monuments and surrounding ceremonial centre.

San Agustín archaeological park was created by Law 103 in 1931 and declared a National Monument and National Archaeological Park in 1993 (Decree 774). The Colombian Constitution established that the properties of the archaeological patrimony (including National Archaeological Parks) are a national and inalienable property. State provisions on the protection of Colombian archaeological heritage are applied effectively in the San Agustín Park. Current regulations, including the General Law of Culture (No. 397 of 1997, modified by Law 1185 of 2009) prohibiting excavations or other archaeological interventions without a license issued by the ICANH are strictly enforced and strong measures are taken to prevent the looting and trafficking of cultural property. Research and preventive conservation measures called for in the legislation are continually carried out.

Through annual plans and by the application of a comprehensive management plan for the World Heritage Site, the Colombian Institute of Anthropology and History-ICANH ensures the effective preservation and conservation of archaeological heritage, minimizing threats to the funerary structures and statues. Among these threats are the strong winds and high levels of rainfall that cause erosion throughout the year, soil instability, and bedrock erosion caused by water flowing over carved designs on bedrock (at Fuente de Lavapatas site).

The open air public exhibition of 16 reconstructed funerary mound and hundreds of megalithic sculptures as well as related archaeological materials at the site´s museum serves to increase public awareness and support for cultural conservation efforts.

The specific environmental conditions at the San Agustín Park and the pressure of local communities are a continuous source of management and conservation challenges for the preservation of funerary structures and other archaeological remains. Thus, the implementation of the Management Plan for the World Heritage Site includes short, medium, and long term programs designed to increase their protection trough: Archaeological and conservation research, conservation, public outreach, local community issues, environmental management, and administrative infrastructure improvements. This program stresses the ICANH´s commitment towards the systematic control of bio-deterioration agents affecting archaeological structures, particularly at the Fuente de Lavapatas site. In addition, a major project for park facility improvement is under way, which will expand available space for research work, collection reserves, and museum spaces, as well as improve reception and visitor services areas. The plan has also included a zoning delimitation and definition of buffer areas, and contemplates opening spaces for community involvement in site protection.

To achieve these goals, the ICANH is continually making efforts to raise additional funds and resources for strengthening the interdisciplinary team of researchers and advisers, and to give continuity to the actions and interventions of each program, thus ensuring the integrity and sustainability of San Agustín Archaeological Park.