Located in a strange lunar landscape of great geological interest, this site has one of the most important groupings of prehistoric cave art in the world. More than 15,000 drawings and engravings record the climatic changes, the animal migrations and the evolution of human life on the edge of the Sahara from 6000 BC to the first centuries of the present era. The geological formations are of outstanding scenic interest, with eroded sandstones forming ‘forests of rock’. 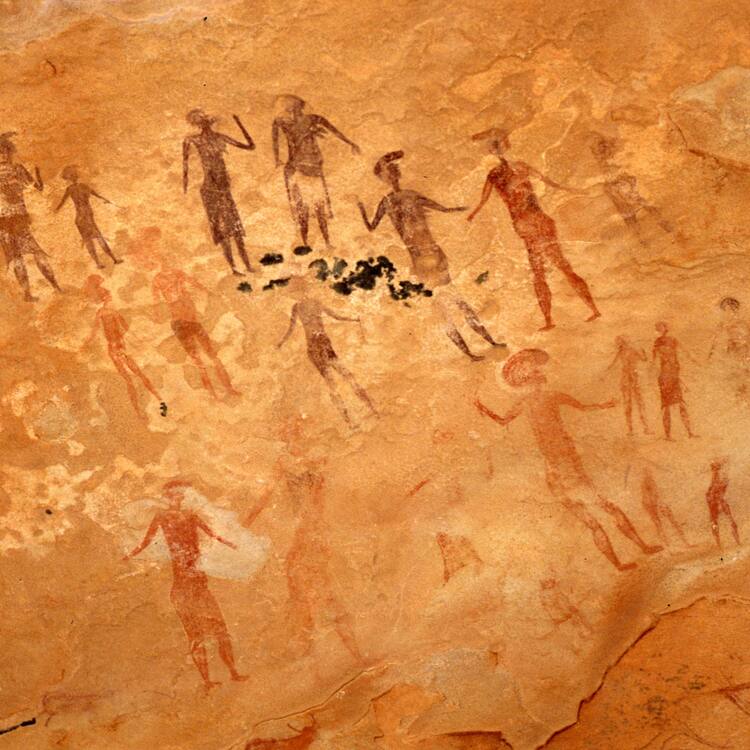 Tassili n'Ajjer is a vast plateau in south-east Algeria at the borders of Libya, Niger and Mali, covering an area of 72,000 sq. km.  The exceptional density of paintings and engravings, and the presence of many prehistoric vestiges, are remarkable testimonies to Prehistory. From 10,000 BC to the first centuries of our era, successive peoples left many archaeological remains, habitations, burial mounds and enclosures which have yielded abundant lithic and ceramic material. However, it is the rock art (engravings and paintings) that have made Tassili world famous as from 1933, the date of its discovery.  15,000 engravings have been identified to date.

The property is also of great geological and aesthetic interest:  the panorama of geological formations with "rock forests" of eroded sandstone resembles a strange lunar landscape.

Criterion (i): The impressive array of paintings and rock engravings of various periods gives world recognition to the property.  The representations of the Round Heads Period evoke possible magic-religious practices some 10,000 years old, whereas the representations of the Cattle Period depicting daily and social life, and which are amongst the most famous prehistoric parietal art, have an aesthetic naturalistic realism.  The last images represent the taming of horses and camels.

Criterion (iii): The rock art images cover a period of about 10,000 years.  With the archaeological remains, they testify in a particularly lively manner to climate changes, changes in fauna and flora, and particularly to possibilities provided for farming and pastoral life linked to impregnable defensive sites during certain prehistoric periods.

Criterion (vii): With the eroded sandstone forming "rock forests", the property is of remarkable scenic interest. The sandstone has kept intact the traces and marks of the major geological and climatic events. The corrosive effects of water, and then wind, have contributed to the formation of a particular morphology, that of a plateau carved by water and softened by the wind.

Humans lived in this area by developing cultural and physiological behaviour adapted to the harsh climate; their vestiges date back to several hundreds of thousands of years. The rock art of Tassili n'Ajjer, is the most eloquent expression of relationships between humans and the environment, with more than 15,000 drawings and engravings testifying to climate changes, wildlife migrations, and the evolution of humankind on the edge of the Sahara. This art depicts water-dependent species like the hippopotamus, and species which have been extinct in the region for thousands of years. This combination of geological, ecological and cultural elements is a highly representative example of a testimony to life.

The property contains all the key rock art sites and landscapes representing its natural beauty and all the sites of biological and ecological diversity that compose the attributes of Outstanding Universal Value. The boundaries and the size (72,000 sq. km) of the property ensure the maintenance of the geological process and the cultural heritage integrity of the site.

The richness of the cultural heritage of rock art and archaeological vestiges, together with the natural diversity of the ecosystem, fauna, flora and wetlands, fully reflect Outstanding Universal Value. It is vulnerable to deterioration caused by climatic phenomena, and to damage caused by visitors.

Given the contemporary geostrategic challenges, and the new patterns of territorial development and rehabilitation of the bordering Saharan regions, and in the framework of the cultural heritage law (Law 98-04 on the Protection of Cultural Heritage), the Ministry of Culture introduced a new category of protection of cultural and natural values: the cultural park - a concept of protection of geographical spaces in which the different cultural and natural values are interlinked and juxtaposed in an intelligible configuration.

Based on this identification, rules for organization and management have been defined, as well as the structures and mechanisms that govern these spaces, from the prehistoric cave to the existing urban fabric, in a general territorial development plan, a legal and technical instrument for policy and planning that associates the sectors of culture, the interior and local collectivities, the environment, forests.

Thus, sustainable management of the heritage of Tassili is included in the framework of the implementation of the Cultural Heritage Law and its texts of application  concerning the creation and organization of the Tassili Park Office, a public establishment of an administrative nature (EPA), the missions of which are the protection, conservation and enhancement of the cultural and natural heritage.  This establishment is run by a director appointed by decree, and managed by an Advisory Board which includes representatives of the various ministerial departments and local representatives. It has an annual operating budget for the implementation of the Action Plan, in the framework of a participatory management policy integrating the different partners, and a capital budget for the realization of major development projects and infrastructures.

The research programmes underway in the Park respond, firstly, to the major challenges in the conservation of the fragile and vulnerable cultural and natural heritage subjected to extreme weather conditions, then to the demands of socialization, education and the promotion of best practices for the sustainable use of the cultural and natural diversity amongst the park residents. The property management also reflects the strong regional value of Tassili n'Ajjer as one of the essential elements of an ecological belt, which includes plant and animal species typical of the Sahara, as well as tropical and Mediterranean species, adapted to the rigors of the climate. Tourism activity which generates income and jobs for local people is subject to conditions which ensure better use of natural and cultural resources. Tourism is strictly controlled; the groups of visitors are always accompanied by an official guide. One of the long-term imperatives in this immense property will remain tourism management.