The List Assumption Cathedral and Monastery of the ...
Print

Assumption Cathedral and Monastery of the town-island of Sviyazhsk

Assumption Cathedral and Monastery of the town-island of Sviyazhsk

The Assumption Cathedral is located in the town-island of Sviyazhsk and is part of the monastery of the same name. Situated at the confluence of the Volga, the Sviyaga and the Shchuka rivers, at the crossroads of the Silk and Volga routes, Sviyazhsk was founded by Ivan the Terrible in 1551. It was from this outpost that he initiated the conquest of the Kazan Khanate. The Assumption Monastery illustrates in its location and architectural composition the political and missionary programme developed by Tsar Ivan IV to extend the Moscow state. The cathedral’s frescoes are among the rarest examples of Eastern Orthodox mural paintings. 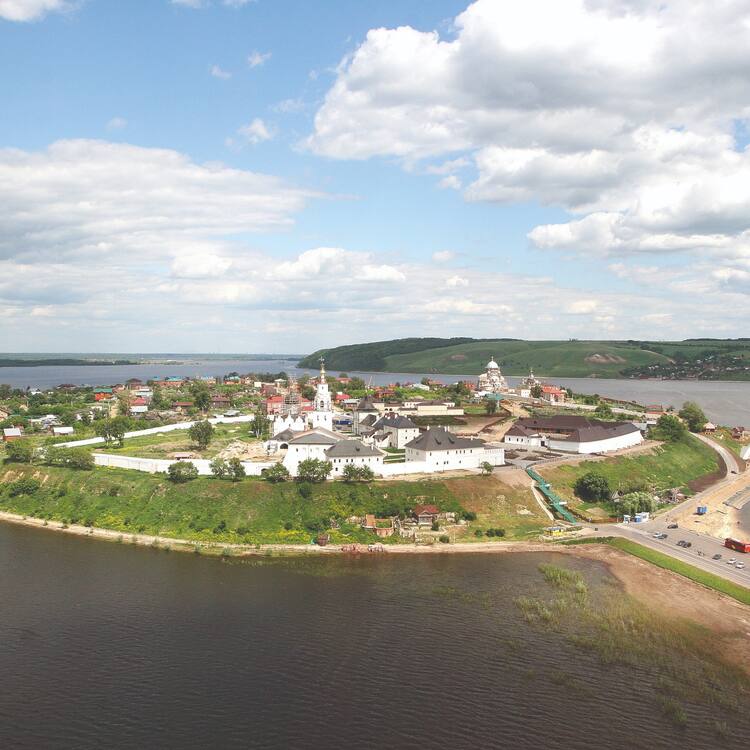 Assumption Cathedral and Monastery of the town-island of Sviyazhsk © Official Tourism Portal of the Republic of Tatarstan - visit-tatarstan.com

The Assumption Cathedral is located in the town–island of Sviyazhsk and is part of the homonymous monastery. Situated at the confluence of the Volga, the Sviyaga and the Shchuka Rivers, at the crossroads of the Silk and Volga routes, Sviyazhsk was founded by Ivan the Terrible in 1551 as the outpost from which to initiate the conquest of the Kazan Khanate. The Assumption Monastery was to function as both missionary and administrative centre for the conquered region. The Cathedral, with its extensive cycles of mural paintings, realised in a relatively short period of time, reflects the ambitious cultural and political programme of the Russian State in the recently conquered Islamic Kazan Khanate, and illustrates new trends in Christian Orthodox art in Russia and Europe.

The Assumption Monastery in its location, setting, layout and the architectural composition of its buildings contributes to illustrating its political, military and missionary role in the 16th century.  The Cathedral is the most outstanding part of the Assumption Monastery Complex: its architecture reflects the prevailing Rus tradition of religious architecture from Moscow, Novgorod, Vladimir and Pskov, shaped upon Byzantine classical heritage as expressed by local craftsmanship and materials. The 18th century renovation of the building with baroque decoration illustrates new trends in art and architecture transposed from Western Europe by Peter the Great into the Russian empire as reference models. The architectural image of the cathedral with its 16th century cycle of wall paintings with scenes from the Old and New Testaments express Ivan IV’s political and religious program to convey his royal power and the power of Orthodoxy to the Tatars, via a comprehensible/acceptable religious vocabulary based on the Old Testament and on the Virgin Mary. St. Nicholas Refectory Church with its bell tower, the Archimandrite building, the monastery school building, the Brethen’s building, and the walls with the Ascension church above the gate supplement and enhance the values of the Assumption Cathedral, illustrating the religious and daily life of Orthodox monasteries in the past. The location and architectural bulk and configuration of the Assumption complex within the town–island of Svyiazhsk made it a prominent complex visible in the distance when approaching the town and express its role as a territorial and religious reference. The cultural layers and archaeological strata preserved in the grounds of the monastery complex and nearby contain 16th-19th century artefacts that are of great interest as a source of information on spiritual, social, artistic and scientific achievements. The Town-Island of Svyiazhsk in its current configuration represents a powerful setting that conveys the sense of an historic outpost settlement.

Criterion (ii): The Assumption Monastery with its Cathedral is real evidence of cardinal historical and geo-political interchanges in Eurasia at a time when the Rus State undertook its expansion eastwards. The architecture and Mariological cycle of wall-paintings of the Cathedral exceptionally reflect the interaction of the Christian-Orthodox and Muslim cultures and interchanges with Western Christian religious iconographical themes, e.g. the Creation or the Proto-evangelical and Evangelical cycles. The unique style of wall-painting and icons of the Assumption Cathedral iconostasis resulted from the fusion of artistic forces of large artistic centres of the Russian state, such as Novgorod, Pskov and Moscow, as well as of masters of the Volga region towns and artists working in the Rostov and Suzdal regions. The Iconostasis pictorial complex is part of the whole artistic system of the Cathedral.

Criterion (iv): The Assumption Monastery with the Cathedral illustrates in its location, layout and architectural composition the political and missionary programme developed by Tsar Ivan IV to extend the Moscow state from European lands to the post-Golden Horde Islamic states. The architecture of the Assumption Cathedral embodies the synthesis of traditional ancient Pskov architecture, a monumental Moscow art of building, and construction traditions of the Volga region. The Assumption Cathedral frescoes are among the rarest examples of Eastern Orthodox mural paintings. The iconographic program of the cathedral includes themes of the Creation and iconographic interpretations of traditional cycles of Proto-evangelic and Evangelic history, reflecting absolutely new trends for Russian religious art and expressing new theological concepts and Tsar Ivan IV’s political programme.

All elements necessary to convey the Outstanding Universal Value of the property are contained within its boundaries. The Assumption Monastery complex with the Cathedral and the other stone buildings is contained within its historic perimeter and the whole complex depicts its historic political and religious functions. Overall, the property exhibits acceptable condition, following conservation, restoration and reconstruction interventions. However, there are some unresolved problems concerning structural instability and unstable indoor environmental parameters in the Cathedral, as well as soil erosion and instability, that are being studied and addressed. Tourism and tourism-related development pressures on the buffer zone and particularly on the town-island of Svyiazhsk are being controlled, but need close monitoring from the relevant authorities.

The location, setting, layout and composition of the Assumption Monastery complex and of its structures are key to understanding its role as a missionary post in a settlement that was strategic from a military and political perspective when it was founded. The architecture of the Assumption Cathedral reflects in its configuration and substance at least two significant stages of its development, dating back to its construction and decoration in the 16th century and its baroque rearrangement in the 18th century. The entire cycle of mural paintings in its interior are key sources of information that credibly attest to the Outstanding Universal Value of the property. The architecture and mural paintings of the refectory and of St. Nicholas Refectory Church complement the iconographic programme of the cathedral. With the exception of the Cathedral, which retains most of its historic fabric in architectural and artistic terms, the buildings within the monastic complex have undergone interventions of different degrees of restoration or reconstruction, which, however, do not prevent them from substantially contributing to illustrating the value of the property.

An array of federal and State legislation ensures that the property and its buffer zone are adequately protected. The whole territory of the buffer zone is legally protected and provided with legally established sub-zones and related regulations. Natural values of the area are also legally protected at the state and federal level and by a much larger UNESCO biosphere reserve designation (Great Volzhsko-Kamsky). To ensure effective protection, the legal provisions/restrictions are integrated into the relevant territorial and urban planning for the districts and the municipalities. All state and local authorities ensure implementation of land-use regulations and restrictions; an interdepartmental commission on town planning ensures compliance of any project proposal falling into the buffer zone with the objectives and requirements for the protection of the property.

An established Coordinating Committee is tasked with advice on decision-making and has a monitoring role on the implementation of the management plan. The effective management of the property derives from the coordination of the various legal and planning instruments and close collaboration among the different institutions; careful consideration of tourism pressures needs to be integrated into any development plan or programme.