Nancy, the temporary residence of a king without a kingdom – Stanislas Leszczynski, later to become Duke of Lorraine – is paradoxically the oldest and most typical example of a modern capital where an enlightened monarch proved to be sensitive to the needs of the public. Built between 1752 and 1756 by a brilliant team led by the architect Héré, this was a carefully conceived project that succeeded in creating a capital that not only enhanced the sovereign's prestige but was also functional. 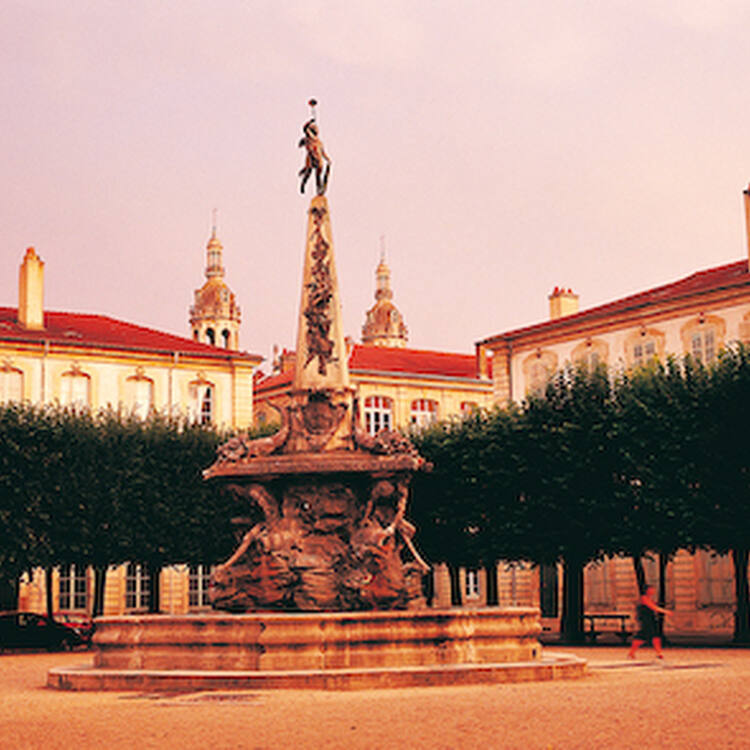 Located in the Alsace-Lorraine-Champagne-Ardenne region, the Place Stanislas, Place Carrière and Place d’Alliance in Nancy comprise one of the most harmonious urban landscapes of the Enlightenment, illustrating in an exemplary and masterful way the idea of the royal square as an urban, monumental and central space. Stanislas Leszczynski, father-in-law of Louis XV, king of France, and unhappy pretender to the Polish throne, received in compensation for his abdication the dukedoms of Lorraine for life. He reigned from 1737 to 1766. The town planning works of Nancy are the most beautiful achievements of the patronage of this prince.

Built between 1752 to 1756, the squares of Nancy comprise a monumental urban space the value of which resides in the exemplarity and variety of its design, the subtlety of its scenography, the richness of its architecture and ornamentation.

The ordered façades of Emmanuel Héré, inspired from an original work of Germain Boffrand, the splendid wrought-iron gates that decorate the open corners created by Jean Lamour, the Fountains of Neptune and Amphitrite of the sculptor Guibal, the Fountain of the Place d’Alliance by Paul-Louis Cyfflé, make this ensemble a veritable masterpiece.

The Stanislas, Carrière and d’Alliance Squares constitute the oldest and most characteristic example of a modern capital, where an enlightened monarch proved to be sensitive to the needs of the public. In addition to providing prestigious architecture conceived to exalt the sovereign, with its triumphal arches, statues and fountains, the project favoured the public with its three squares giving access to the town hall, the courts of justice and the “Palais de Fermes” as well as to other public buildings.

Criterion (iv): The squares of Nancy bear witness to the oldest and most characteristic example of town planning of the Enlightenment, in a modern city where a enlightened monarch carried out an exceptional programme of public spaces and buildings, illustrating that he was receptive to the needs of the population.

The ensemble of the squares has conserved its original ordered plan, architectural and decorative integrity. The only variations are destinations or uses of certain buildings that surround them, while conserving the urban public functions. The squares have retained their unity, their urbanity and their centrality.

These maintenance and restoration interventions, based on prior scientific and technical studies, carried out under State control, have enabled the improvement of its state of conservation. The Place Stanislas has recovered its former splendour.

The three squares comprising the property benefit from a series of protection measures under the Heritage Code which have been progressively used and extended since the beginning of the 20th century to 2003. A safeguarded sector was approved in 1996, including the ensemble of the property. A buffer zone of 159 ha was proposed based on the extended boundaries of the remarkable heritage site. On this basis, all work on the components of the property require the authorization of the services of the Ministry of Culture and Communication and are carried out under its authority.

The implementation of the management system and the monitoring of its effectiveness are the responsibility of the Urban Community of Grand Nancy and the Ministry of Culture and Communication.

All the local institutions, in cooperation with the devolved services of the State, contribute to an efficient management of the property, in line with an overall heritage protection and enhancement programme.