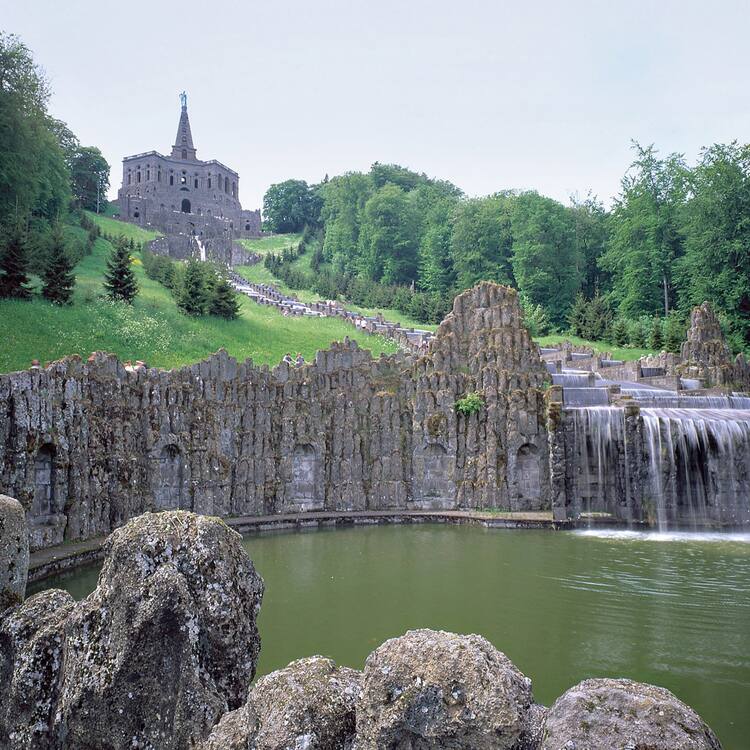 Inspired by the dramatic topography of its site, the Hercules monument and water features of the Bergpark Wilhelmshöhe created by the Landgrave Carl from 1689 combine in an outstanding demonstration of man’s mastery over nature. The monumental display of rushing water from the Octagon crowned by the massive Hercules statue via the Vexing Grotto and Artichoke Basin with their hydro pneumatic acoustic effects, Felsensturz Waterfall and Giant’s Head Basin down the Baroque Cascade to Neptune’s Basin and on towards the crowning glory of the Grand Fountain, a 50 metre high geyser that was the tallest in the world when built in 1767, is focused along an east-west axis terminating in the centre of the city of Kassel. Complemented by the wild Romantic period waterfalls, rapids and cataracts created under Carl’s great-grandson the Elector Wilhelm I, as part of the 18th century landscape in the lower part of the Bergpark, the whole composition is an outstanding demonstration of the technical and artistic mastery of water in a designed landscape. Together with the 11.5m high copper sheets Hercules statue towering above the park and visible from many kilometres, which represents an extraordinary sculptural achievement, they are testimony to the wealth and power of the 18th & 19th century European ruling class.

Criterion (iii): The towering statue of Hercules and the water displays of the Bergpark Wilhelmshöhe are an exceptional symbol of the era of European Absolutism.

Criterion (iv): The water displays of Bergpark Wilhelmshöhe are an outstanding and unique example of monumental water structures. Cascades of similar size and artificial waterfalls of comparable height can be found nowhere else. The Hercules statue, towering over the 560 hectare park, is both technically and artistically the most sophisticated and colossal statue of the Early Modern era. The ensemble of water features with their monumental architectural settings is unparalleled in the garden art of the Baroque and Romantic periods.

The nominated property includes all elements necessary to express its values and does not suffer from adverse effects of development or neglect. All water features except the New Waterfall are still operable and together with the Hercules Monument preserve their visual integrity and setting.

The nominated property is authentic in terms of its form and design, materials and substance, use and function, techniques, location and setting. The technology required for the water features has been preserved, complete and functional.

The property is protected by laws of the Federal Republic of Germany including the Regional Planning Act, Town and Country Planning Code, Federal Nature Conservation Act, the Environmental Impact Assessment Act, and the Federal Forest Act, as well as by the laws of the Federal State of Hesse including the Act on the Protection of Cultural Monuments, the Hessian State Planning Act, Hessian Forest Act, the Hessian Act on the Implementation of the Federal Nature Conservation Act, and the Hessian building regulations. The property is protected in its entirety by the Hessian Act on the Protection of Cultural Monuments. The property is managed under the direction of a Steering Committee comprising representatives of the Hessian Ministry of Higher Education, Research and Arts, the City of Kassel, the Museumslandschaft and Kassel County and served by a Steering Board, which is a panel of experts that appoints specialised task groups as required to work with the World Heritage Hesse Staff Unit within the Hessian State Office for the Preservation of Historical Monuments. The woods and open spaces of the water catchment areas of the Habichtswald are managed by the Hessen-Forst State Forestry Administration, Wolfhagen forestry office.

The Bergpark is considered as a protected complex in the Regional Plan North Hesse 2009, and as having recreational value within a pristine environment. According to the City of Kassel’s Urban Development Concept (2006) the traffic situation around the Bergpark will be improved, Wilhelmshöher Allee’s periphery will be finalised as a boulevard and certain roads through the park will be closed. The Management Plan for the Water features and Hercules within the Bergpark Wilhelmshöhe, prepared in 2008-2010 jointly by representatives of the State of Hesse, the city and county of Kassel, and citizens’ representatives is being implemented by the Steering Committee and focuses on protection and preservation of the monuments, garden buildings, natural resources, views and vistas, sustainable tourism and public use. Local citizens are involved in working groups and residents in the buffer zone are consulted on all planning matters relating to the Bergpark. Management will be improved by inclusion of a risk preparedness strategy.