The colony of Augusta Emerita, which became present-day Mérida in Estremadura, was founded in 25 B.C. at the end of the Spanish Campaign and was the capital of Lusitania. The well-preserved remains of the old city include, in particular, a large bridge over the Guadiana, an amphitheatre, a theatre, a vast circus and an exceptional water-supply system. It is an excellent example of a provincial Roman capital during the empire and in the years afterwards. 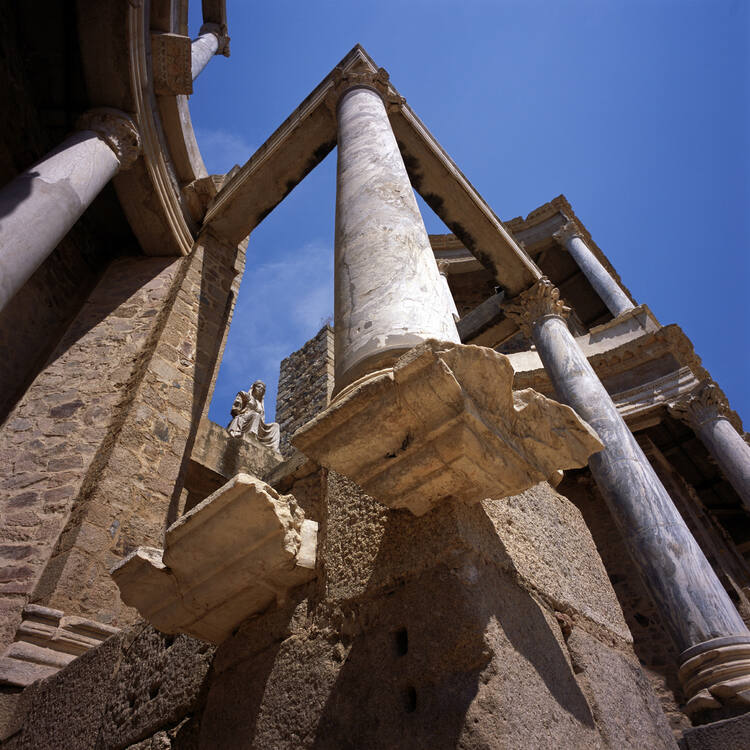 The Archaeological Ensemble of Mérida, located in Extremadura, Spain, has its origins in the year 25 BC, when Augustus completed the conquest of the North of Hispania and founded the Colony of Augusta Emerita. The city was created as an idealised model of Rome and was the capital of Lusitania, the western-most province of the Roman Empire. Following Diocletian’s reform, it functioned as the capital of the Diocese of Hispania. It was also temporarily the royal seat of two Germanic peoples - the Suebi and the Visigoths - and under the Arabic dominion, Mérida was one of the three border capitals of Al-Andalus, together with Toledo and Zaragoza, ensuring control of the western part of the Iberian peninsula.

The modern city of Mérida has been built on top of Emerita; yet, archaeological remains are well preserved and still evidence the Roman city. The 22 component parts of the property comprise an area of 31 ha. These include buildings for entertainment (theatre and amphitheatre), public architecture of the Forum and other spaces of power (provincial forum), engineering works (bridges, the dyke, cutwater and clean and waste water systems), and religious buildings, such as the Temple of Diana or the Temple of Marte. The property also includes excellent examples of private architecture, such as the Casa del Anfiteatro, La Casa Basílica, or Casa del Mitreo, which represent daily life. Most of the elements are located within the walled area of the Roman colony, but some are found outside its walls, such as the dams, aqueducts or thermal baths of Alange, in a natural environment and a landscape that has remained comparable to the one of Roman times.

Mérida is an excellent example of a provincial Roman capital during the empire and in the subsequent years. Its historic development is evidenced until today in its street pattern and many constructions still have their original function (bridge, dyke, Arch of Trajano, dams, sewers, Aqueduct of San Lázaro, etc.) or have been rehabilitated for modern use, such as the Circus or Theatre, whose classical theatre festival dates back to the 1930s. The buildings for leisure form an outstanding ensemble with the amphitheatre, theatre, landscaped peristyle and circus. The aqueducts and other water management elements, in an excellent state of conservation, are recognised as being among the best examples from the Roman era. In addition, the historical evolution can be traced in representative buildings of other important periods of history, such as the reinforced walls of the Visigoth era, the Paleo-Christian basilicas of Santa Eulalia and Casa Herrera or Santa Lucia del Trampal, and the Alcazaba (fortress) and its outstanding aljibe (tank) from the Muslim era.

The remarkable conditions of the Archaeological Ensemble of Mérida allow the property to serve as a learning ground, with vast remains from Roman times and from the development of the city in subsequent times that illustrate the evolution of a European city over a 2000-year period.

Criterion (iii): The Archaeological Ensemble of Mérida is a remarkable example of a Roman city built according to all the Roman urban design rules. Mérida preserves an architecture that reflects its former role as capital in Roman and later eras.

Criterion (iv): The Archaeological Ensemble of Mérida is an outstanding example of public buildings of a major Roman provincial capital, both in its imperial heyday and its subsequent history.

The remains of the Archaeological Ensemble of Mérida are remarkably well preserved and maintain material integrity. All component parts of the Archaeological Ensemble form a single whole as they preserve the main elements of the Roman colony, above which other monuments from the Visigoth or Muslim era were built, thus evidencing the amalgamation of different periods in history. The limited urban development of the city has allowed for the integrity of all the buried monuments to be preserved until they were excavated in the 20th century.

The archaeological monuments have been incorporated into the present-day city and are elements of the urban landscape. Despite the alterations over the centuries, they have all maintained their historical and scientific significance. Many of the constructions, such as the bridges or the theatre, still remain in use.

The different component parts of the Archaeological Ensemble of Mérida maintain their conditions of authenticity in regard to their form, design, materials, use and function. The Basilica of Santa Eulalia is a Visigoth construction, but also Romanesque, Gothic and Baroque, and is an example of a legacy adapted to the needs of different generations. The same applies to some stretches of the Guadiana Bridge, altered in the Middle Ages and modern times. In the 17th century, during the Spanish Empire, two Christian monuments were built with Roman marble that show the main signs of the city’s historical identity: the Obelisk of Santa Eulalia and the small temple also devoted to this martyr, built with pagan altars and the remains of the Temple of Marte, respectively. Only in specific instances in the 20th century have the monuments been restored due to conservation needs or for ease of understanding, such as part of the block stands of the Amphitheatre and some of its vaults. The stage front of the theatre was rebuilt on an exceptional basis, but following anastylosis criteria. As a general rule, the state of conservation is remarkable since intervention policy only allows consolidation works but no reconstruction.

The Archaeological Ensemble of Mérida is legally protected by Law 16/1985 on Spanish Historical Heritage and Law 2/1999 on Extremadura’s Historical and Cultural Heritage and the Special Protection Plan for the Historical and Archaeological Ensemble of Mérida, a specific protection regulation passed under the protection of the aforementioned laws and contained in Title IX of the Mérida General Town Planning Plan (published in the Official Journal of Extremadura, Supplement E of N.º 106, of 12 September 2000).

The Consortium “Monumental, Historical-Artistic and Archaeological City of Mérida” has the overall responsibility for the management of the Archaeological Ensemble of Mérida. This is a public entity with its own legal status made up of all the administrations with authority in heritage conservation matters, such as the Regional Government of Extremadura, the Spanish Ministry for Culture, Mérida City Council and Badajoz Provincial Government; this entity succeeded the former Board of the Monumental City of Mérida.

The Consortium of the Monumental City of Mérida has a budget and an action plan to carry out preservation work and improvements of the Archaeological Ensemble each year. It also holds comprehensive action plans for the various monuments of the Ensemble to ensure the preservation of its significance.