K’gari (Fraser Island) lies just off the east coast of Australia. At 122 km long, it is the largest sand island in the world. Majestic remnants of tall rainforest growing on sand and half the world’s perched freshwater dune lakes are found inland from the beach. The combination of shifting sand-dunes, tropical rainforests and lakes makes it an exceptional site. 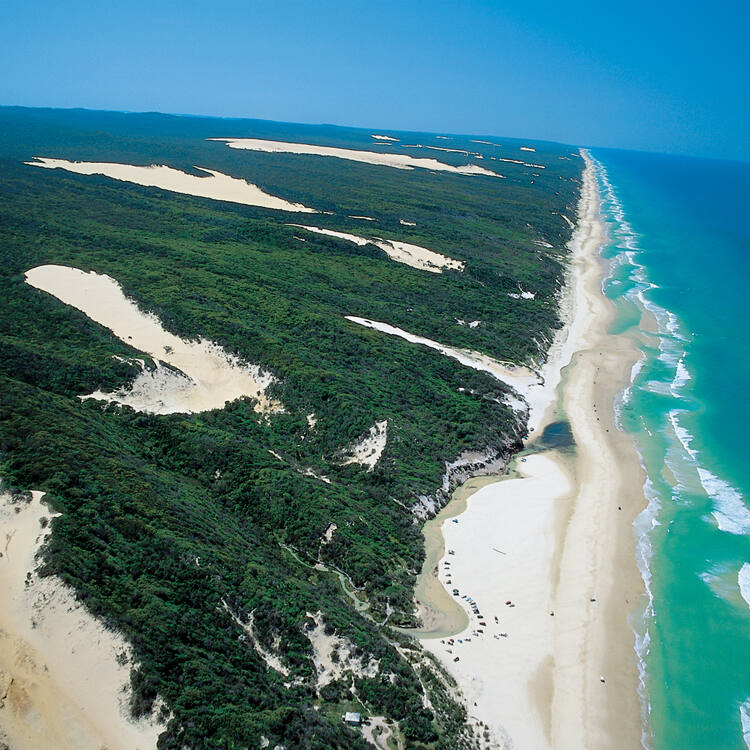 Fraser Island, also known by its Aboriginal name of K’gari, lies along the eastern coast of Australia. The property covers 181,851 hectares and includes all of K’gari (Fraser Island) and several small islands off the island's west coast. It is the world’s largest sand island, offering an outstanding example of ongoing biological, hydrological and geomorphological processes.  The development of rainforest vegetation on coastal dune systems at the scale found on K’gari (Fraser Island) is unique, plus the island boasts the world’s largest unconfined aquifer on a sand island.

The property has exceptional natural beauty with over 250 kilometres of clear sandy beaches with long, uninterrupted sweeps of ocean beach, strikingly coloured sand cliffs, and spectacular blowouts. Inland from the beach are majestic remnants of tall rainforest growing on sandy dunes and half of the world’s perched freshwater dune lakes.

Criterion (vii): K’gari (Fraser Island) is the largest sand island in the world, containing a diverse range of features that are of exceptional natural beauty. The area has over 250 kilometres of clear sandy beaches with long, uninterrupted sweeps of ocean beach, including more than 40 kilometres of strikingly coloured sand cliffs, as well as spectacular blowouts. Inland from the beach are majestic remnants of tall rainforest growing on tall sand dunes, a phenomenon believed to be unique in the world. Half of the world’s perched freshwater dune lakes occur on the island, producing a spectacular and varied landscape. The world’s largest unconfined aquifer on a sand island has also been found here.

Criterion (viii): The property represents an outstanding example of significant ongoing geological processes including longshore drift. The immense sand dunes are part of the longest and most complete age sequence of coastal dune systems in the world and are still evolving. The superimposition of active parabolic dunes on remnants of older dunes deposited during periods of low sea level, which are stabilised by towering rainforests at elevations of up to 240 metres, is considered unique. K’gari (Fraser Island) also has a variety of freshwater dune lakes which are exceptional in terms of number, diversity and age. The dynamic interrelationship between the coastal dune sand mass, aquifer hydrology and the freshwater dune lakes provides a sequence of lake formation both spatially and temporally.

The process of soil formation on the island is also unique, since as a result of the successive overlaying of dune systems, a chronosequence of podzol development from the younger dune systems on the east to the oldest systems on the west change from rudimentary profiles less than 0.5 metres thick to giant forms more than 25 metres thick. The latter far exceeds known depths of podzols anywhere else in the world and has a direct influence on plant succession, with the older dune systems causing retrogressive succession when the soil horizon becomes too deep to provide nutrition for tall forest species.

Criterion (ix): The property represents an outstanding example of significant ongoing biological processes. These processes, acting on a sand medium, include biological adaptation (such as unusual rainforest succession), and biological evolution (such as the development of rare and biogeographically significant species of plants and animals).

Vegetation associations and succession represented on K’gari (Fraser Island) display an unusual level of complexity, with major changes in floristic and structural composition occurring over very short distances. Both heathland and closed forest communities provide refugia for relict and disjunct populations, which are important to ongoing speciation and radiation. Evolution and specialised adaptation to low fertility, fire, waterlogging and aridity is continuing in the ancient angiosperm flora of the heathlands and the associated vertebrate and invertebrate fauna. Since listing, patterned fens have been discovered on the property, which along with those at Cooloola, are the only known examples of sub-tropical patterned fens in the world. These fens support an unusual number of rare and threatened invertebrate and vertebrate species.

The dynamic interrelationship between the coastal dune sand mass, hydrology, the ongoing processes of soil formation and the development of plant communities is remarkable in its scale and complexity given the uniform substrate. In particular, the development of rainforest vegetation communities, with trees up to 50 metres tall on coastal dune systems at the scale found on K’gari (Fraser Island), is not known to occur elsewhere in the world. There is clear zonation and succession of plant communities according to salinity, water table, age and nutrient status of dune sands, exposure and fire frequency. The low shrubby heaths (‘wallum’) are of considerable evolutionary and ecological significance.  Fauna including a number of threatened species of frog, have adapted to the highly specialised acidic environment associated with wet heathlands and sedgelands in this siliceous sand environment.

The conditions of integrity are met as there is no perceptible human threat to longshore drift and other ongoing processes that make this area outstanding. The property is sufficiently large, diverse and free from disturbance to contain all ecosystem components required for viable populations of all species and for continued maintenance of all natural phenomena. For example the evolution of soil profiles remains essentially undisturbed. Weeds, plant diseases and feral animals are present but in low numbers and are subject to active management. Disjunct and relict populations of flora and fauna, including those associated with the lakes and creeks, have remained intact and will continue to be important for ongoing speciation. While the tall forests have been affected to some extent by logging, this practice has stopped and the forests have the capacity to return to their former grandeur.

On-ground management of the property is the responsibility of the Queensland Parks and Wildlife Service, Department of Environment and Resource Management, guided by the Great Sandy Region Management Plan, and activity-specific management plans for K’gari (Fraser Island). As the majority of the island is national park, the strongly protective provisions of the Nature Conservation Act 1992 and the Recreation Areas Management Act 2006 apply. The narrow marine zone surrounding the island lies within the Great Sandy Marine Park and is subject to the provisions of the Marine Parks Act 2004. Indigenous, community and scientific advice on protection and management of the World Heritage values is provided to the State of Queensland and Australian Governments by three K’gari (Fraser Island) World Heritage Area Advisory Committees.

Key threats requiring ongoing attention include degradation due to visitor numbers, inappropriate fire, invasive plants and animals, and climate change. Recreational use of the area is intensive and localised degradation can occur from excessive numbers of visitors potentially impacting on, in particular, lake water quality. Appropriate fire management is required to maintain the integrity of the World Heritage values. Significant human and financial resources are being directed to the management of these threats as well as to the protection and monitoring of the property. 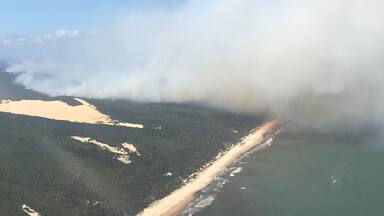