Situated on the plains in the north-central region of Canada, the park (which covers 44,807 km2) is home to North America's largest population of wild bison. It is also the natural nesting place of the whooping crane. Another of the park's attractions is the world's largest inland delta, located at the mouth of the Peace and Athabasca rivers. 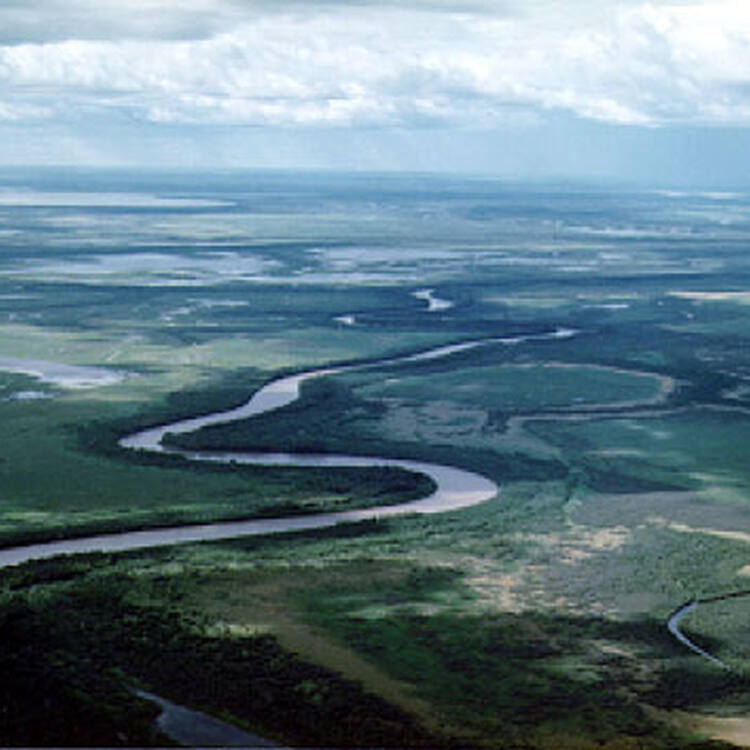 Wood Buffalo National Park is an outstanding example of ongoing ecological and biological processes encompassing some of the largest undisturbed grass and sedge meadows left in North America. It sustains the world’s largest herd of wood bison, a threatened species. The park’s huge tracts of boreal forest also provide crucial habitat for a diverse range of other species, including the endangered whooping crane. The continued evolution of a large inland delta, salt plains and gypsum karst add to the park’s uniqueness.

Criterion (vii): The great concentrations of migratory wildlife are of world importance and the rare and superlative natural phenomena include a large inland delta, salt plains and gypsum karst that are equally internationally significant.

Criterion (ix): Wood Buffalo National Park is the most ecologically complete and largest example of the entire Great Plains-Boreal grassland ecosystem of North America, the only place where the predator-prey relationship between wolves and wood bison has continued, unbroken, over time.

Criterion (x): Wood Buffalo National Park contains the only breeding habitat in the world for the whooping crane, an endangered species brought back from the brink of extinction through careful management of the small number of breeding pairs in the park. The park’s size (4.5 million ha), complete ecosystems and protection are essential for in-situ conservation of the whooping crane.

Wood Buffalo National Park straddles the boundary between the province of Alberta and the Northwest Territories, and encompasses 4.5 million hectares of forest, wetland and prairie, including the majority of the Peace-Athabasca Delta. The size of the park allows for the protection of entire ecosystems and the ecosystem features that are the basis for the park’s Outstanding Universal Value. The park’s size, remoteness, very low human population density and the absence of resource extraction activities minimize human-related stress within the property, resulting in a high level of integrity. Bovine brucellosis and tuberculosis are present within the wood bison population in and around the park. The actual and potential impact on the delta from stressors originating outside the park, such as flow regulation, water withdrawals, industrial discharge and climate change, is monitored by the park and by working in collaboration with a network of partners to monitor and manage impacts from upstream development.

The Canada National Parks Act provides effective legal protection for the park. Under the requirements of the legislation, a park management plan was approved in June 2010 and provides direction for protecting the features of the park that are the basis for its Outstanding Universal Value, and for providing opportunities for visitors to experience and learn about the park. The park’s two largest wetlands (the Peace-Athabasca Delta and the whooping crane nesting area) have also been declared Wetlands of International Importance under the RAMSAR convention.

Park managers work with 11 Aboriginal groups for whom Wood Buffalo National Park is an area of significant cultural value to cooperatively manage the park, as each group carries out traditional harvesting and other cultural activities within the park boundaries. Endangered species and their critical habitat, including the breeding grounds of the whooping crane, are protected under provisions of Canada’s Species at Risk Act. Park staff also work with Environment Canada, international crane preservation groups and U.S. government agencies to ensure the long term viability of the park’s whooping crane flock.

Park staff closely monitors upstream development on the major rivers that flow into the park and work closely with local Aboriginal partners, other government agencies, stakeholders and industry to maintain the ecological integrity of Wood Buffalo National Park. The park management plan commits park managers to developing an Area Management Plan for the Peace-Athabasca Delta to address the challenges of managing the delta’s ecological and cultural values in cooperation with partners and stakeholders. The Peace-Athabasca Delta Ecological Monitoring Program, a multi-stakeholder group made up of Aboriginal representatives, government and non-government organizations, is a cornerstone in developing and implementing this plan.

Special attention will be given over the long term to monitoring and taking appropriate actions related to a number of factors in or near the property. Specifically, attention will focus on the actual and potential impacts of upstream development and climate change. 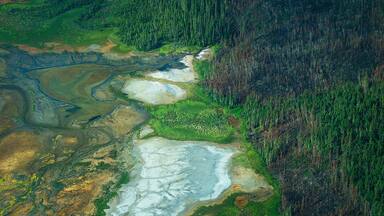