The 239,723 ha Purnululu National Park is located in the State of Western Australia. It contains the deeply dissected Bungle Bungle Range composed of Devonian-age quartz sandstone eroded over a period of 20 million years into a series of beehive-shaped towers or cones, whose steeply sloping surfaces are distinctly marked by regular horizontal bands of dark-grey cyanobacterial crust (single-celled photosynthetic organisms). These outstanding examples of cone karst owe their existence and uniqueness to several interacting geological, biological, erosional and climatic phenomena. 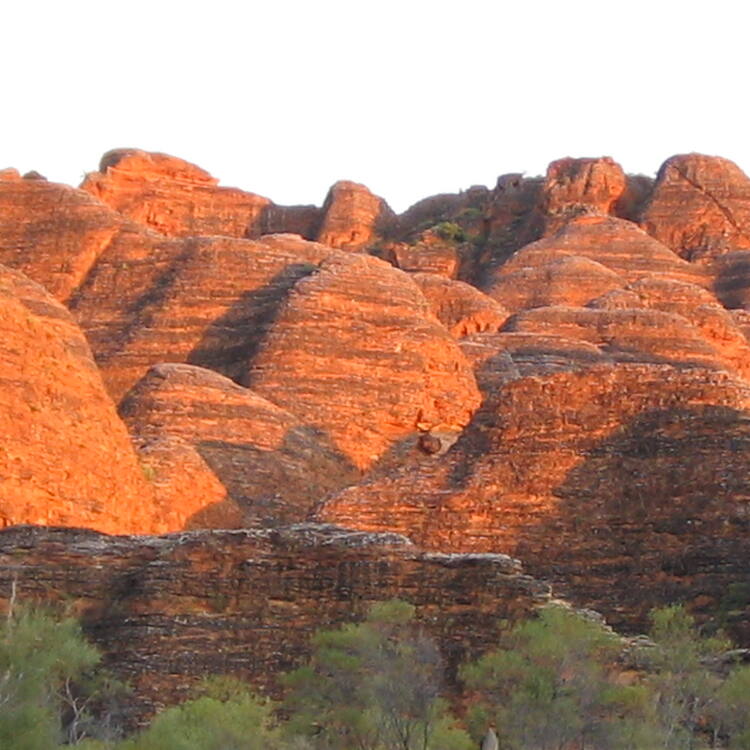 Purnululu NationalPark, located in the Kimberley region of Western Australia, covers almost 240,000 hectares of remote area managed as wilderness. It includes the Bungle Bungle Range, a spectacularly incised landscape of sculptured rocks which contains superlative examples of beehive-shaped karst sandstone rising 250 metres above the surrounding semi-arid savannah grasslands. Unique depositional processes and weathering have given these towers their spectacular black and orange banded appearance, formed by biological processes of cyanobacteria (single cell photosynthetic organisms) which serve to stabilise and protect the ancient sandstone formations. These outstanding examples of cone karst that have eroded over a period of 20 million years are of great beauty and exceptional geological interest.

Criterion (vii): Although Purnululu National Park has not been widely known in Australia until recently and remains relatively inaccessible, it has become recognised internationally for its exceptional natural beauty. The prime scenic attraction is the extraordinary array of banded, beehive-shaped cone towers comprising the Bungle Bungle Range. These have become emblematic of the park and are internationally renowned among Australia's natural attractions. The dramatically sculptured structures, unrivalled in their scale, extent, grandeur and diversity of form anywhere in the world, undergo remarkable daily and seasonal variation in appearance, including striking colour transition following rain and with the positioning of the sun. The intricate maze of towers is accentuated by sinuous, narrow, sheer-sided gorges lined with majestic Livistona fan palms. These and the soaring cliffs up to 250 metres high are cut by seasonal waterfalls and pools, creating the major tourist attractions in the park with evocative names such as Echidna Chasm, Piccaninny and Cathedral Gorges. The diversity of landforms and ecosystems elsewhere in the park are representative of the semi-arid landscape in which Purnululu is located and provide a sympathetic visual buffer for the massif.

Criterion (viii): The Bungle Bungles are, by far, the most outstanding example of cone karst in sandstones anywhere in the world and owe their existence and uniqueness to several interacting geological, biological, erosional and climatic phenomena. The sandstone karst of Purnululu National Park is of great scientific importance in demonstrating so clearly the process of cone karst formation on sandstone - a phenomenon recognised by geomorphologists only recently and still not completely understood. The Bungle Bungle Ranges of the Park also display to an exceptional degree evidence of geomorphic processes of dissolution, weathering and erosion in the evolution of landforms under a savannah climatic regime within an ancient, stable sedimentary landscape.

Purnululu National Park includes the full extent of the Bungle Bungle Range, the World Heritage property’s predominant feature. The Range is well-buffered by protected land on all sides including spinifex- and mulga-dominated sand plains within the Park to the north, south and east. In the west the dominant feature is that of the Osmond Ranges which lie within the adjoining Purnululu Conservation Park (PCP).  These areas were considered sufficient to protect the World Heritage values of the Range with the recommendation that the PCP be incorporated into the Park, and that surrounding pastoral country should also be added to provide better buffering and boundary delimitation. It was noted that the existing park boundaries are not ideal, being mainly water courses rather than watershed boundaries. This could potentially allow incursion of undesirable impacts from neighbouring areas in catchments upstream of the park, such as waste effluent from mining activities.

Since World Heritage listing, extensive areas of land have been added to reserved lands adjacent to the World Heritage property.  This has resulted in the Park being completely surrounded by large areas of conservation land. These reserves include the Western Australian Government’s Purnululu Conservation Park and Ord River Regeneration Reserve.

The issue of impacts from outside the reserved area is managed by the Australian Government’s Environment Protection and Biodiversity Conservation Act 1999, which addresses any potential impact to the property’s World Heritage values. While there were no permanent inhabitants within the property at time of inscription, today there is seasonal occupation by traditional owners in three areas designated as special “Living Area Leases” within the property. Land tenure issues between the Indigenous community (Native Title claims) and the State are in the process of being determined.

Purnululu National Park World Heritage property is public land with secure legal protection and is managed on a day-to-day basis by the Western Australian government. Ranger staff resides within the Park whilst on duty, but the Park is closed during the wet season from December to the beginning of April.

Land-based access to and within the Park can be difficult because of the remoteness of the area and the Park’s position at the edge of Australia’s monsoonal region.  Infrastructure funding has been used to upgrade the Park’s walking tracks, airstrip and associated helipad. Aerial tours are managed through set flight paths to control noise and facilitate safety.

Although visitor numbers have steadily risen over time, management measures are sufficient to address potential impacts.  Infrastructure funding has increased with the Park’s World Heritage listing. However, maintaining adequate staffing of the Park can be difficult in this remote area.  In the past grazing by cattle and feral donkeys has been problematic, and at time of inscription wandering stock and other pests were still an issue, requiring cooperation from neighbouring landowners. Invasive alien species such as feral cats and more recently the imminent arrival of cane toads also requires management.

Wildfires, especially now there is greater vegetation cover as the landscape recovers from past over-grazing, are also a major management concern. Measures, including controlled burns in the monsoon season, are in place to manage this threat.

Potential impacts to World Heritage values by mining activities are well-managed through a number of measures. First, mineral exploration and mining are prohibited in the Park by the State Government. Second, while exploration and mining are possible in the neighbouring Purnululu Conservation Park and Ord River Regeneration Reserve, any potential impacts to the World Heritage values are addressed through the Australian Government’s Environment Protection and Biodiversity Conservation Act 1999 (EPBC Act).

Since inscription, climate change has emerged as an additional potential threat to the World Heritage values, and Australia has introduced a range of measures at both the national and property-specific level to address potential threats.

Australia has reported regularly to the World Heritage Committee on a number of management issues in Purnululu National Park.  These include the addition of reserve land to further buffer the Park, measures to ensure that any mining outside the Park is suitably managed to avoid impacts to World Heritage values, management of alien invasive species and funding for staffing and infrastructure for the Park.