Between the 17th and 20th centuries, the ruling dukes of Liechtenstein transformed their domains in southern Moravia into a striking landscape. It married Baroque architecture (mainly the work of Johann Bernhard Fischer von Erlach) and the classical and neo-Gothic style of the castles of Lednice and Valtice with countryside fashioned according to English romantic principles of landscape architecture. At 200 km2 , it is one of the largest artificial landscapes in Europe. 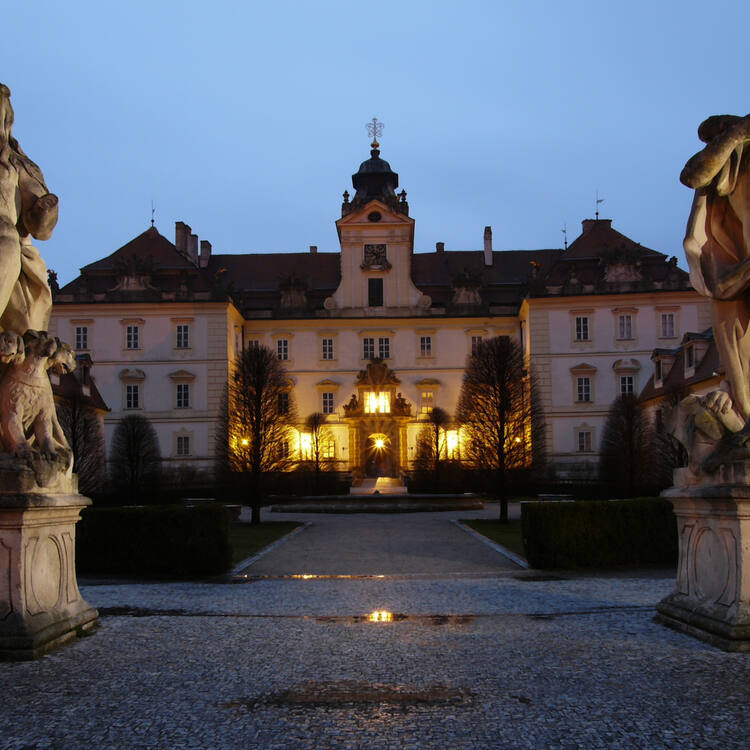 The Lednice-Valtice valley is located in South Moravia, Czech Republic. With its 143 km2, the Lednice-Valtice Cultural Landscape is unique because of how architectural, biological and landscape features have been shaped over time.

The Liechtenstein family came first to Lednice in the mid-13th century, and by the end of the 14th century they had also acquired Valtice, nearby. These properties were to become the nucleus of the family's extensive possessions. The two estates were later joined with the neighbouring Břeclav estate to form an organic whole, to serve the recreational requirements of the ducal family and as material evidence of its prestige. The execution of this grandiose design began in the 17th century with the creation of avenues connecting Valtice with other parts of the estate. It continued throughout the 18th century with the construction of a network of paths and scenic trails, imposing order on nature in the manner of the English artists and architects of the Renaissance. The early years of the 19th century saw the application by Duke Jan Josef I of the English concept of landscaped designed park, strongly influenced by the work of Lancelot “Capability” Brown at Stowe and elsewhere in England. Enormous landscaping projects were undertaken, which included the raising of the level of the Lednice Park and the digging of a new channel for the Dyje River. Smaller parks designed based on the English pattern, the so-called Englische Anlagen, were also created around three large ponds.

The composition of the landscape is based on the two country houses, Lednice and Valtice. The Valtice country house has medieval foundations, but it underwent successive remodelling in Renaissance, Mannerist and, most significantly, Baroque styles. Its present Baroque appearance is due to several architects, notably Johann Bernard Fischer von Erlach, Domenico Martinelli and Anton Johann Ospel. Along with the Baroque Church of the Assumption of the Virgin Mary, it is the dominant feature in the system of avenues created in the 17th and 18th centuries. The Lednice country house began as a Renaissance villa of around 1570, and then was progressively changed and remodelled to reflect Baroque, Classical and Neo-Gothic fashions. It was the 1850 Gothic Revival remodelling that brought it into harmony with the prevailing Romanticism of this part of the landscape. The park of the Lednice country house includes architectural objects like a remarkable Palm house, a unique Minaret and other minor structures.

Taking the property as a whole, it is the mingling and interplay of Baroque and Romantic elements that gives it a special character: architecture and landscape are intimately associated with one another. All the buildings are sited with great care at high points, as in the case of the Kolonáda (Colonade), the Rendezvous, Rybniční zámeček (Fishpond Manor) or Pohansko, at the crossing of major routes (the Obelisk), or at the boundary between Moravia and Lower Austria (Hraniční zámeček). The view and vistas are also mutually linked. Most have views of the two dominant features, the Minaret and the Kolonáda, but there are also significant visual connections between other groups (the Temple of Apollo, Belvedere, Janohrad, the Hunting House, the New Farmyard, the Fishpond Manor, the Temple of Three Graces, the Obelisk and St. Hubert Chapel etc.).

An important element in the appearance of this entire area is the very wide range of native and exotic tree species and the planting strategy adopted. The greatest variety is to be found in the parklands which cluster around the two main residences and along the banks of the fishponds between Lednice and Valtice. The Pohansko Manor is built on the site of an important hillfort of the Great Moravian period dating from the 8th century. The 2 km of massive ramparts enclosing an area of 28 ha are still visible. Excavations have revealed the court of the ruler, a church (the plan of which is preserved in situ), several substantial houses and a rich burial ground.

The Lednice-Valtice Cultural Landscape is an exceptional example of a designed cultural landscape, which is made particularly impressive by the number and variety of cultural and natural elements that it contains.

Criterion (i): The Lednice-Valtice Cultural Landscape is an outstanding artistic creation that succeeds in bringing together in harmony cultural monuments from successive periods and both indigenous and exotic natural elements to create an outstanding work of human creativity.

Criterion (ii): By combining the Baroque, Classical and Neo-Gothic architectural styles and by transforming the landscape according to the English romantic principles, Lednice-Valtice estate served as a model throughout the Danube region.

Criterion (iv): The Lednice-Valtice Cultural Landscape is an outstanding example of a cultural landscape designed and created intentionally by a single family during the century of Enlightenment, the Romantic period and later on.

The property includes the territory of the former estate of the Liechtenstein family. Its size and delimitation are appropriate. All the key elements conveying the Outstanding Universal Value of the property are situated within its boundaries. There is no buffer zone due to the characteristics of the site. Although the most important elements necessary to convey the Outstanding Universal Value are contained inside the property boundaries, there is a need to protect the key viewpoints outside the boundaries. Because of this fact and the proximity of the town Břeclav and of other villages, a buffer zone may be proposed in the future to keep the visual integrity. The property has a stabilized landscape planning; however, there is a risk of disharmonious development (e.g. transport, urban). Nature conservation organisations exert some pressure on the site that infringes the preservation of the original compound of the landscape and of the woody plants.

The Lednice-Valtice Cultural Landscape is of high authenticity concerning its present form and appearance, which conform closely with the ideas of successive owners over several centuries. The landscape has continued to evolve according to the original planning principles. The prince's country houses serve as architectural museums; their interiors are well maintained and open to the public. All buildings are restored using original materials and techniques. Exotic tree species planted on the grounds come, to a large extent, from seedlings and seeds imported from North America at the beginning of the 19th century. They have been regularly maintained. Plants in the unique Palm house in Lednice are cultivated using traditional methods, with manual labour playing a considerable role.

The Lednice-Valtice Cultural Landscape is protected by Act No. 20/1987 Coll. on State Heritage Preservation as amended. The property is designated a protected cultural landscape. The Lednice and Valtice country houses are designated national cultural heritage sites. The property does not have a buffer zone due to the characteristics of the site but it is neighbouring the Pálava Landscape Protected Area declared by UNESCO in 2003. The Municipal Offices of Valtice, Břeclav, Lednice, Podivín, Hlohovec, the District Office of Břeclav and the Regional Office of the South Moravia Region share responsibility for the preservation of cultural landscape under the overall supervision of the Ministry of Culture. The pressure of development (e.g. transport, urban) is regulated by the Act mentioned above and by the valid land use plans with respect to the visual integrity of the property. So, any actions that might affect the property must be authorized by the appropriate state agencies and regional offices. Nevertheless, a buffer zone may be proposed in the future to keep the visual integrity of the property.

The property management is by an inter-branch steering group. The Management Plan is in place and regular updates are planned. The property management is provided by several stakeholders on the national, regional and local levels. There is a need to reinforce the role and involvement of the local communities as well as to make sure that the property is managed in accordance with sustainability. A suitable solution would be to develop a site management system (coordinator), including a legally based competence platform, to provide on principles of the participatory management and subsidiarity a conceptual, as well as daily co-ordination of interdisciplinary interests relating to the preservation of values of the whole property.