The Monastery of Santa Maria d'Alcobaça, north of Lisbon, was founded in the 12th century by King Alfonso I. Its size, the purity of its architectural style, the beauty of the materials and the care with which it was built make this a masterpiece of Cistercian Gothic art. 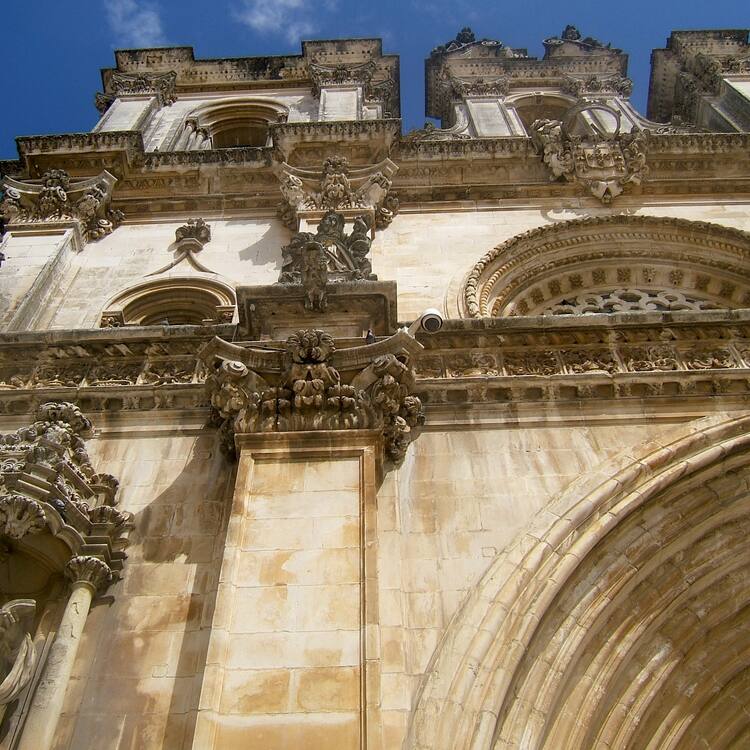 The founding of the Monastery of Alcobaça, located in central Portugal, is closely associated with the beginning of the Portuguese monarchy. When Afonso Henriques was proclaimed King Alfonso I in 1139, he based his political reconquest on the Crusaders and on religious orders. Alcobaça was given to the Cistercians in recognition of their support to the conquest of Santarem (1152) with the understanding that they would colonise and work the surrounding lands.

In the 13th century, while the monastery church, laid out similarly to Pontigny Abbey in Burgundy (France), and the magnificent monastic buildings were under construction, the monastery's intellectual and political influence had already spread throughout the western part of the Iberian Peninsula. It was a centre of study and religious doctrine - the kingdom's most important monastic school was located within its premises - and it accommodated a wealthy congregation.

In this monumental complex, the Manueline sacristy of Infante Dom Afonso, appointed abbot of Alcobaça in 1505, the upper cloister of João de Castilho, the façade and main part of the baroque lodgings of Friar João Turriano (1702), and the King's Room are particularly noteworthy.

The ultimate symbol of this privileged relationship with the Portuguese monarchy can be found in the famous tombs of Inês de Castro and Dom Pedro (Peter I). King Peter I commissioned the twin tombs after the dramatic event that would later inspire the poet Luís Vaz de Camões, the writer Velez de Guevara and so many other authors and filmmakers. The design of a high sarcophagus supporting the giants watched over by angels, frequently used in the 14th century, finds here one of its greatest artistic expressions. The stylistic quality of the sculptured ornaments, despite having been mutilated by Napoleon's troops in 1810-1811, is surpassed by the compelling symbolism of the iconography, which evokes human destiny, death, and the Christian hope of eternal life. Built c. 1360, the tombs are the tangible sign of Peter I's mystical rehabilitation of Inês, assassinated at Coimbra on the orders of King Alfonso IV.

Criterion (i): By virtue of its magnificent dimensions, the clarity of the architectural style, the beauty of the material used and the care with which it was built, the Monastery of Alcobaça is a masterpiece of Gothic Cistercian art. It bears witness to the spreading of an aesthetic style that developed in Burgundy at the time of St Bernard, and to the survival of the ascetic ideal which characterised the order's early establishments like Fontenay. The tombs of Dom Pedro and Dona Inês de Castro are beautiful examples of Gothic funerary sculptures.

Criterion (iv): The Monastery of Alcobaça is an example of a great Cistercian establishment with a unique infrastructure of hydraulic systems and functional buildings. Deservedly renowned, the 18th-century kitchen adds to the interest of the group of monastic buildings from the medieval period (cloister and lavabo, chapter house, parlor, dormitory, the monks' room and the refectory).

The Monastery of Alcobaça has been properly conserved and contains all the necessary elements to convey its Outstanding Universal Value. No major changes have occurred that could affect the property’s integrity.

The changes that have been made to the Monastery of Alcobaça mainly concern the following: restoration of the 18th-century granary; electrical and audio installations; restoration of terra cotta and wood sculptures from the Baroque period; repair works to avoid infiltrations into the monument and the construction of the Saint Bernard exhibition gallery.

The Monastery of Alcobaça still retains its authenticity as it has not undergone any major alterations. Restoration projects implemented by national organisations have strictly respected original materials and techniques. In addition, the awareness of the importance of maintaining the physical and intangible authenticity of the property is a fundamental and overarching principle for safeguarding the monument and preserving its specificity and uniqueness. Similarly, the characteristics of the location and setting are still well maintained due to municipal managers who apply regulatory and legal measures to preserve the property’s buffer zone and wider setting.

The Monastery of Alcobaça was classified as a national monument by a Decree published in the Government Journal no. 14 of 17 January 1907. In order to ensure enforcement of the Law as the basis for the policy regulations for protection and enhancement of cultural heritage (Law no. 107 of 8 September 2001), Decree no. 140 of 15 June 2009 has established the legal framework for studies, projects, reports, works or interventions carried out for classified cultural assets. It underscores that prior and systematic assessment, monitoring and careful analysis of any works that are likely to affect the property’s integrity are essential to avoid any disfigurement, dilapidation, loss of physical features or authenticity. This is ensured by appropriate and strict planning, by qualified staff, on the techniques, methodologies and resources to be used for implementation of works on cultural properties.

One of the key goals of the property’s management is to preserve the attributes that justified its inscription on the World Heritage List, as well as maintain the conditions of authenticity and integrity of the whole monumental complex. This is achieved through the development of a work plan involving the local community in decision-making and implementation.

All the interventions that have been implemented or are programmed comply with current legislation, as well as with strict technical and scientific criteria. Attention is given to the treatment and rehabilitation of the area surrounding the monument, as these works are to be ensured by local organisations involving both the municipality and the local community.

The management of the Monastery of Alcobaça is ensured by the decentralised services of the Directorate General for Cultural Heritage (DGPC), the national administration department responsible for cultural heritage. Conservation, enhancement and safeguarding measures are ensured by DGPC, which is also responsible for drawing up an annual programme and implementing it so as to ensure the adequate conservation and protection of the property.