The List Victorian Gothic and Art Deco Ensembles of ...
Print

Having become a global trading centre, the city of Mumbai implemented an ambitious urban planning project in the second half of the 19th century. It led to the construction of ensembles of public buildings bordering the Oval Maidan open space, first in the Victorian Neo-Gothic style and then, in the early 20th century, in the Art Deco idiom. The Victorian ensemble includes Indian elements suited to the climate, including balconies and verandas. The Art Deco edifices, with their cinemas and residential buildings, blend Indian design with Art Deco imagery, creating a unique style that has been described as Indo-Deco. These two ensembles bear testimony to the phases of modernization that Mumbai has undergone in the course of the 19th and 20th centuries. 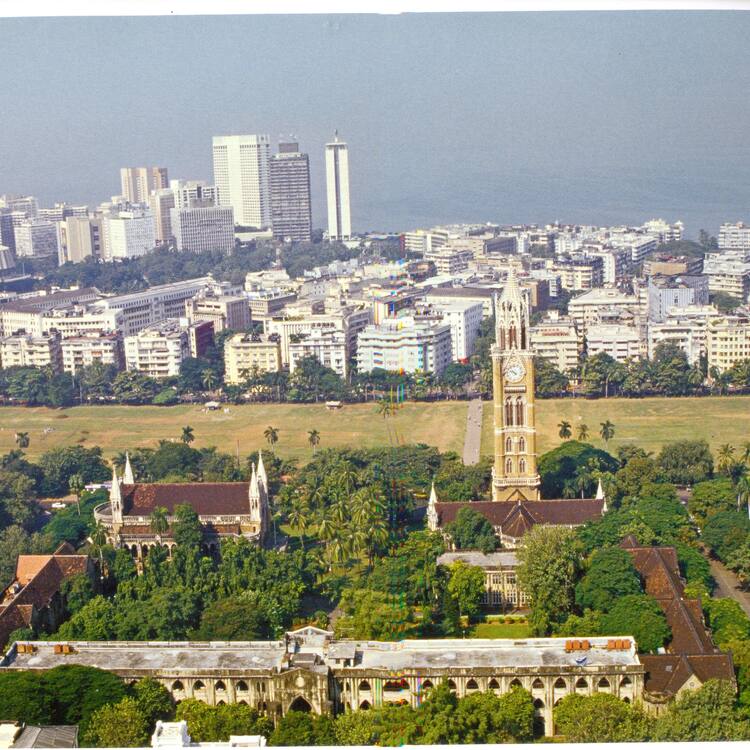 Two waves of urban development of Mumbai in the 19th and 20th centuries transformed the city from a fortified trading outpost to the first city of India. The first expansion included the construction in the 1880s of a group of Victorian Gothic public buildings and the creation of the Oval Maidan.

The second expansion was the Backbay Reclamation Scheme in the early 20th century, which offered a new opportunity for Bombay to expand to the west with Art Deco residential, commercial and entertainment buildings and the creation of the Marine Drive sea front.

Today the Oval Maidan offers a spectacular ensemble of Victorian Gothic buildings on its eastern side, and another impressive ensemble of Art Deco buildings on its western side as a testimony to the modernization phases that Mumbai went through leading to a modern independent India in 1947.

Criterion (ii): Both the Victorian Gothic and the Art Deco ensembles exhibit an important exchange of European and Indian human values over a span of time. The Victorian assemblage of grand public buildings created an Indo-Gothic style by blending Gothic revival elements with Indian elements, with adaptations in response to the local climate by introducing balconies and verandas. Mumbai’s Art Deco buildings of iconic cinema halls and apartment buildings blended Indian design with Art Deco imagery and created a unique style that became known as Indo-Deco. Its influence spread through the Indian sub-continent.

Criterion (iv): The Victorian Gothic and Art Deco ensembles reflect the developments in architecture and urban planning over two centuries. The two ensembles represent architectural styles, phases in the advancements of construction materials and techniques, urban planning philosophies, and historical phases which are distinctive and facing each other across the Oval Maidan. Both ensembles are the creation of the two major urban expansions of Bombay, which led to the development of the city to become the internationally important mercantile city of the twentieth century and up to the present.

The assemblage of Victorian Gothic and Art Deco buildings retains a high degree of integrity in visual, spatial and planning terms with the Rajabai Clock tower as the visual high point and the Oval Maidan, which is a unifying element and a centrepiece offering to view both the Victorian and the Art Deco groups of buildings. It retains its integrity as a planned urban development. The wider settings of the property are vulnerable to urban development pressures.

The assemblage of Victorian Gothic and Art Deco buildings meets the conditions of authenticity in terms of architectural form, decorative motifs, design, scale and material. They also retain their original use. The Oval Maidan retains its authenticity as an urban open space and Marine Drive retains its setting as a sea-facing Art Deco development.

Even if individual buildings may have experienced modifications, their living nature, form and design are still authentic in general; in particular the use and function of each building remains almost unchanged in both the Victorian district and the Art Deco district.

The legal protection of the property and buffer zone is based on the statute of the Government of Maharashtra, most importantly by the Heritage Regulations for Greater Bombay 1995, Regulation No. 67 (DCR 67). Under this regulation, buildings of the property are listed as Grade I, IIA, IIB or III. The property and its buffer zone fall within the two heritage precincts: Fort Precinct and Marine Drive Precinct.

The property is managed according to Section 52 of the Greater Mumbai Development Plan by the Heritage Conservation Committee, which was created by DCR 67. The Site Management Plan identifies nine objectives and presents an action plan consisting of 13 actions, with an indication of the stakeholders or agencies involved for each action, and whether it is an ongoing, short-, medium- or long-term action. It should be strengthened to include an organizational chart, the legal provisions of the management of the property, an implementation mechanism for the management action plan and a management tourism strategy.