Schokland was a peninsula that by the 15th century had become an island. Occupied and then abandoned as the sea encroached, it had to be evacuated in 1859. But following the draining of the Zuider Zee, it has, since the 1940s, formed part of the land reclaimed from the sea. Schokland has vestiges of human habitation going back to prehistoric times. It symbolizes the heroic, age-old struggle of the people of the Netherlands against the encroachment of the waters. 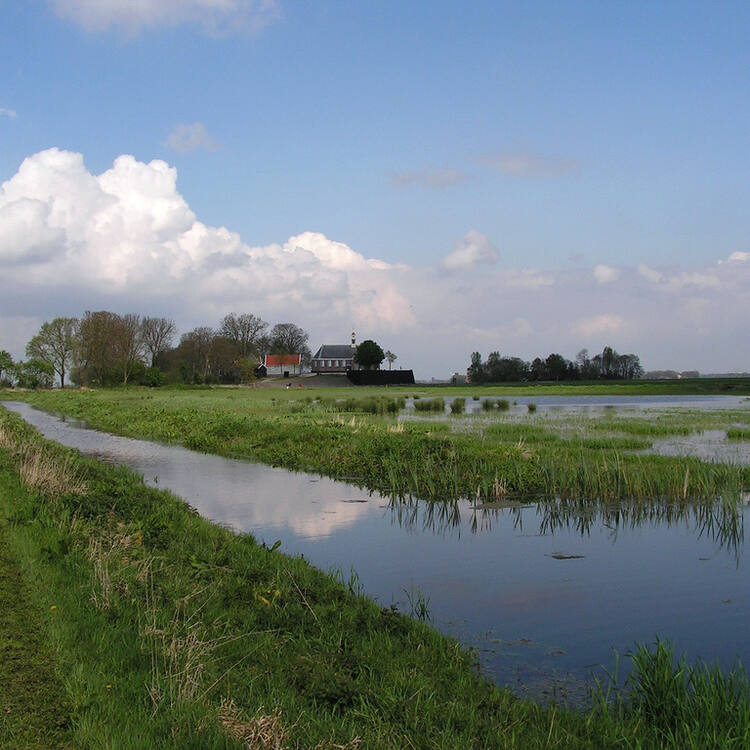 The struggle of the people of the Netherlands against water has endured, for more than six thousand years, and still continues today; without constant vigilance, more than half the present area of the country would be entirely submerged or subject to periodic inundation. Schokland was a peninsula that by the fifteenth century had become an island. Occupied and then abandoned as the sea encroached, it had to be evacuated in 1859. Following the impoldering of the Zuider Zee, however, it has formed part of the land reclaimed from the sea since the 1940s. Schokland has vestiges of human habitation going back to prehistoric times. It symbolizes the heroic, age-old struggle of the people of the Netherlands against the encroachment of the water. As a result of the colossal reclamation programme that began in the early years of the 20th century, Schokland and the settlement mounds and other human interventions that surround it stand as mute testimony to the skill and fortitude of the Dutch people in the face of this never-ceasing natural threat.

The contours of the former island of Schokland above the flat lands of the reclaimed Noordoostpolder are still easy to trace in the topography within the former island — there are four large village terps, all of them protected archaeological sites. A fifth such site includes traces of Neolithic, Bronze Age and Iron Age settlements.

The remains of dykes and terps located outside the present island reflect the former contours of the island and the land that has been lost over the course of time. Also located outside the present island, but within the boundaries of the World Heritage property, are more than 160 archaeological sites with remnants of prehistoric occupation. A church and church ruins, residential and commercial buildings, barns, a former harbour, and land division patterns (both old and new) go to complete the story of Schokland.

The area provides exceptional evidence of a cultural tradition of island-dwellers threatened by the water and ultimately evacuated; the first residents on the land reclaimed from the sea cultivated and developed that new land. The area is an exceptional example of a traditional type of settlement and land use that is representative of cultures, primarily when these have become vulnerable due to the influence of irreversible change.

Criterion (iii): Schokland and its surroundings preserve the last surviving evidence of a prehistoric and early historic society that had adapted to the precarious life of wetland settlements under the constant threat of temporary or permanent incursions by the sea.

Criterion (v):Schokland is included in the agricultural landscape that was created as a result of the reclamation of the former Zuider Zee, part of the never-ceasing struggle of the people of the Netherlands against the water and one of the greatest and most visionary human achievements of the twentieth century. The history of this region is excellently represented in this small area, with its settlements, cemeteries, terps, dykes and parcel systems.

Despite having been part of the new man-made landscape since 1942, as an inland island used for large-scale agriculture, the contours of the former island are still clearly visible, with heritage remnants such as dykes and terps. The whole island and its immediate surroundings are included in the World Heritage property. Vestiges of all phases of the settlement history of Schokland are clearly recognisable: the traces of prehistoric settlement in the ground, the four terps on the eastern side of the island, the buildings on the island itself, the characteristic recent system of land division of the polder, and the green areas along the edge of the island.  Without an appropriate management regime, dehydration and modern agriculture could threaten the area and cause damage to the archaeological deposits.

The authenticity of the site resides in its very existence. The nomination dossier was subtitled “symbol of the Dutch battle against water,” an apt description of Schokland and its authenticity. There are at least 152 sites in and around Schokland where the remains of prehistoric settlements, dykes and terps have been discovered. Together, these reflect the former contours of the island, the land that has been lost over the course of time and due to the living conditions over a period of 6000 years. The island itself is still entirely authentic. Vestiges of the earlier buildings on the former island remain in the form of the Dutch Reformed church and the adjoining minister’s house (1834) and a much-restored boathouse for an iceboat in Middelbuurt. All the other buildings were demolished after the evacuation in 1859. The wooden buildings in Middelbuurt housing the Schokland Museum, are replicas  of buildings and barns in the traditional Zuider Zee style from about 1980. In Oud-Emmeloord, the lighthouse keeper’s house (1882) and the foghorn house (about 1921) have been preserved. Some of the surviving features have been reconstructed, for example the harbour basin in Oud-Emmeloord with its jetties and ice aprons, the pile walls in Middelbuurt, and the foundations of the old beacon at the terp at the southern extremity. Sections of the foundations of the churches at the southern extremity have been restored. The church in Middelbuurt has been fully restored and given (nonoriginal) furnishings. A specialised company restored the church ruins using original materials. The harbours, the breakwater, and the lighthouse have been reconstructed according to the currently applicable legislation.

Schokland and Surroundings comprises five protected national archaeological sites (four terps and an area with traces of prehistoric settlement) and five listed buildings, namely the lighthouse keeper’s house and the foghorn at the Oud-Emmeloord terp at the northernmost point, the former Dutch Reformed church and the boathouse for an iceboat in Middelbuurt, and a ruined church at the southernmost point of the former island.

Since 2002, a hydrological buffer zone has been constructed on the east side of the island so as to prevent subsidence of the island and damage to the archaeological record in the soil due to groundwater depletion. The government has also bought up more than 200 hectares of agricultural land and terminated production there.

The municipality of Noordoostpolder became the site holder in 2010. Actual management, based on a management plan, is in the hands of the Flevo Landscape Foundation [Stichting Flevolandschap] and the municipality of Noordoostpolder. Besides management by the Flevo Landscape Foundation and the municipality (together some 500 hectares), the area is also used by the owners and tenants of agricultural land. In all cases, this use is intended to preserve the various features but at the same time to generate economic returns. The management plan is the result of specific agreements and administrative measures. The plan comprises specific tasks and responsibilities regarding preservation, management, and access of/to the Schokland World Heritage property and its surroundings. The management plan also makes clear the division of roles for these parties regarding management and preservation. The management plan is therefore a widely supported document which presents a shared view of the area and serves to unite all the parties involved, regarding concrete activities, organisation and finances. It also provides an integration framework for assessing the implementation of projects and ideas.

One of the most important projects for the parties involved concerns the continued monitoring of the state of conservation of archaeological sites in the area surrounding the former island. Due to soil subsidence there is a strained relationship between agricultural use of the land and the conservation of the archaeological remnants. Since 2012, all parties strive to define a second hydrological buffer zone at the southern tip of the former island, involving another 200 hectares of land.

The Dutch government intends to designate the World Heritage property Schokland and Surroundings as a protected conservation area under the 1988 Monuments and Historic Buildings Act [Monumentenwet 1988].