Located in a limestone plateau of the Ardèche River in southern France, the property contains the earliest-known and best-preserved figurative drawings in the world, dating back as early as the Aurignacian period (30,000–32,000 BP), making it an exceptional testimony of prehistoric art. The cave was closed off by a rock fall approximately 20,000 years BP and remained sealed until its discovery in 1994, which helped to keep it in pristine condition. Over 1,000 images have so far been inventoried on its walls, combining a variety of anthropomorphic and animal motifs. Of exceptional aesthetic quality, they demonstrate a range of techniques including the skilful use of shading, combinations of paint and engraving, anatomical precision, three-dimensionality and movement. They include several dangerous animal species difficult to observe at that time, such as mammoth, bear, cave lion, rhino, bison and auroch, as well as 4,000 inventoried remains of prehistoric fauna and a variety of human footprints. 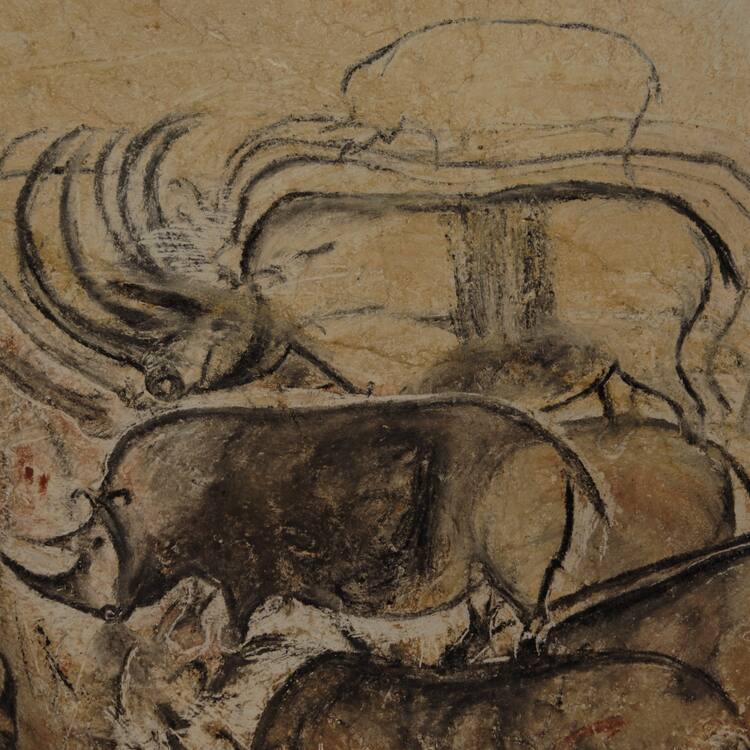 The decorated cave of Pont d’Arc, known as Grotte Chauvet-Pont d’Arc is located in a limestone plateau of the meandering Ardèche River in southern France, and extends to an area of approximately 8,500 square meters. It contains the earliest known pictorial drawings, carbon-dated to as early as the Aurignacian period (30,000 to 32,000 BP). The cave was closed off by a rock fall approximately 20,000 years BP and remained sealed until its rediscovery in 1994. It contains more than 1,000 drawings, predominantly of animals, including several dangerous species, as well as a large number of archaeological and Palaeolithic vestiges.

The cave contains the best-preserved expressions of artistic creation of the Aurignacian people, constituting an exceptional testimony of prehistoric cave art. In addition to the anthropomorphic depictions, the zoomorphic drawings illustrate an unusual selection of animals, which were difficult to observe or approach at the time. Some of these are uniquely illustrated in Grotte Chauvet. As a result of the extremely stable interior climate over millennia, as well as the absence of natural damaging processes, the drawings and paintings have been preserved in a pristine state of conservation and in exceptional completeness.

Criterion (i): The decorated cave of Pont d’Arc, known as Grotte Chauvet-Pont d’Arc contains the first known expressions of human artistic genius and more than 1,000 drawings of anthropomorphic and zoomorphic motifs of exceptional aesthetic quality have been inventoried. These form a remarkable expression of early human artistic creation of grand excellence and variety, both in motifs and in techniques. The artistic quality is underlined by the skilful use of colours, combinations of paint and engravings, the precision in anatomical representation and the ability to give an impression of volumes and movements.

Criterion (iii): The decorated cave of Pont d’Arc, known as Grotte Chauvet-Pont d’Arc bears a unique and exceptionally well-preserved testimony to the cultural and artistic tradition of the Aurignacian people and to the early development of creative human activity in general. The cave’s seclusion for more than 20 millennia has transmitted an unparalleled testimony of early Aurignacian art, free of post-Aurignacian human intervention or disturbances. The archaeological and paleontological evidence in the cave illustrates like no other cave of the Early Upper Palaeolithic period, the frequentation of caves for cultural and ritual practices.

The nominated property comprises the entire subterranean space of the cave of approximately 8,500 square meters and all structurally relevant parts of the limestone plateau above the cave as well as its entrance situation and immediate surroundings. These spaces contain all the attributes of Outstanding Universal Value and the property is of adequate size. Strict preventive conservation policies including access restrictions have allowed for the maintenance of an almost identical situation to the time of discovery. These access restrictions and the continuous monitoring of the climatic conditions will be key factors for the preservation of integrity of the property and for averting potential dangers of human impact.

The authenticity of the property can be demonstrated by its pristine condition and state of conservation, having been sealed off for 23,000 years and carefully treated and access-restricted since its rediscovery. The dating of the finds and drawings has been confirmed by C14 analysis as between 32,000 and 30,000 years BP, and the materials, designs, drawing techniques and traces of workmanship date back to this time. The rock art as well as the archaeological and paleontological vestiges are free of human impact or alterations. The only modification is the installation of completely-reversible, stainless steel bridging elements to allow for access to parts of the cave whilst preventing disturbance of floor traces or finds.

The decorated cave of Pont d’Arc, known as Grotte Chauvet-Pont d’Arc is protected at the highest national level as a historic monument. Likewise, the buffer zone benefits from the highest level of national protection since early 2013. The buffer zone accordingly will not permit future development.

The focus of management is the implementation of a preventive conservation strategy based on constant monitoring and non-intervention. Several monitoring systems have been installed in the cave which form an integral part of these preventive conservation efforts. Any changes in relative humidity and/or the air composition inside the cave may have severe effects on the condition of the drawings and paintings. It is due to this risk that the cave will not be open to the general public, but also that future visits of experts, researchers and conservators will need to be restricted to the absolute minimum necessary. Despite the delicateness of paintings and drawings, no conservation activities have been carried out in the cave and it is intended to retain all paintings and drawings in the fragile but pristine condition in which they were discovered.

After it became clear that the cave would never be accessible to the general public, the idea of a facsimile reconstruction to provide interpretation and presentation facilities emerged. The Grand Projet Espace de Restitution de la Grotte Chauvet (ERGC) was established, with the aim of creating a facsimile reconstruction of the cave with its paintings and drawings, and a discovery and interpretation area to attract visitors.