The Sansa are Buddhist mountain monasteries located throughout the southern provinces of the Korean Peninsula. The spatial arrangement of the seven temples that comprise the property, established from the 7th to 9th centuries, present common characteristics that are specific to Korea – the ‘madang’ (open courtyard) flanked by four buildings (Buddha Hall, pavilion, lecture hall and dormitory). They contain a large number of individually remarkable structures, objects, documents and shrines. These mountain monasteries are sacred places, which have survived as living centres of faith and daily religious practice to the present. 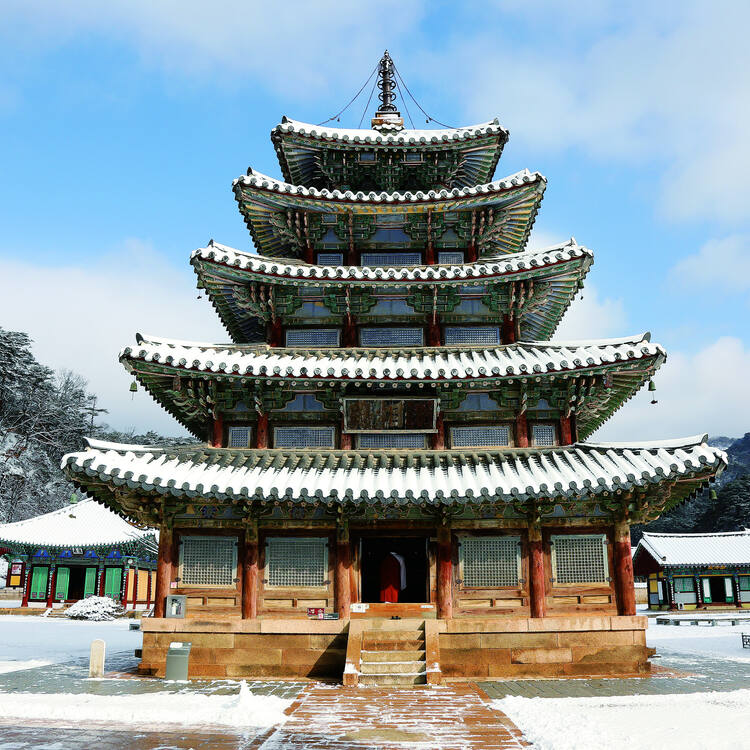 Sansa consists of seven Buddhist mountain monasteries—Tongdosa, Buseoksa, Bongjeongsa, Beopjusa, Magoksa, Seonamsa and Daeheungsa—located throughout the southern provinces of the Korean Peninsula. The seven monasteries established from the 7th to the 9th centuries have functioned as centres of religious belief, spiritual practice, and daily living of monastic communities, reflecting the historical development of Korean Buddhism. Sansa has accommodated diverse Buddhist schools and popular beliefs within its precinct, and many of its notable historic structures, halls, objects and documents reflect such assimilating features of Korean Buddhism. The distinctive intangible and historical aspects of Korean Buddhism can be recognized in the continuous traditions of self-sufficient temple management, education of monks, and coexistence of meditative practice and doctrinal studies of Korean Seon Buddhism. These mountain monasteries are sacred places, which have survived to the present as living centres of faith and religious practices despite suppression during the Joseon Dynasty and damages caused by wars and conflicts over the years.

Criterion (iii): Buddhism has a long history that has traversed a number of historical eras in the Korean Peninsula. The seven mountain monasteries – Tongdosa, Buseoksa, Bongjeongsa, Beopjusa, Magoksa, Seonamsa and Daeheungsa – offer a distinctively Korean instantiation of Buddhist monastic culture from the 7th century to the present day. These mountain monasteries are sacred places and provide an exceptional testimony to their long and continuing traditions of Buddhist spiritual practice.

Together the seven temples contain the elements necessary to express the Outstanding Universal Value of Korean Buddhist mountain monasteries, including their mountain settings, well-preserved buildings for religious practice and daily living, worship halls and shrines, meditation areas, monastic academy spaces and dormitories for monks. Few pressures threaten the components and they are intact, free of major losses and alterations during the modern period, and retain their original functions, despite changes through history.

The authenticity of the serial property is based on the long and continuing uses of the components for Buddhist spiritual practices and rituals, and is based on their location and setting; traditions, techniques and management skills; and intangible heritage. The architectural elements have been carefully maintained according to principles of repair and restoration, using traditional construction techniques, although the function of some buildings have changed to support the operations of the temples. The religious traditions and functions of the Buddhist temples maintain a high degree of authenticity.

The seven temples are all being protected and managed as State or City/Province designated Cultural Heritage under the Cultural Heritage Protection Act. Modern constructions to facilitate continuing use and developments around the temples are strictly controlled. Each of the seven components is also protected by the Korean Traditional Temples Preservation and Support Act.

Each temple is under the responsibility of a chief abbot. The Cultural Heritage Administration and provincial governments are responsible for the management of cultural heritage, and the development and implementation of related projects. The Laity Association of each temple participates in volunteer work to support Buddhist practices, maintaining the temple landscapes and cleaning the temples. Visitor infrastructure is provided at each temple.