The Jelling burial mounds and one of the runic stones are striking examples of pagan Nordic culture, while the other runic stone and the church illustrate the Christianization of the Danish people towards the middle of the 10th century. 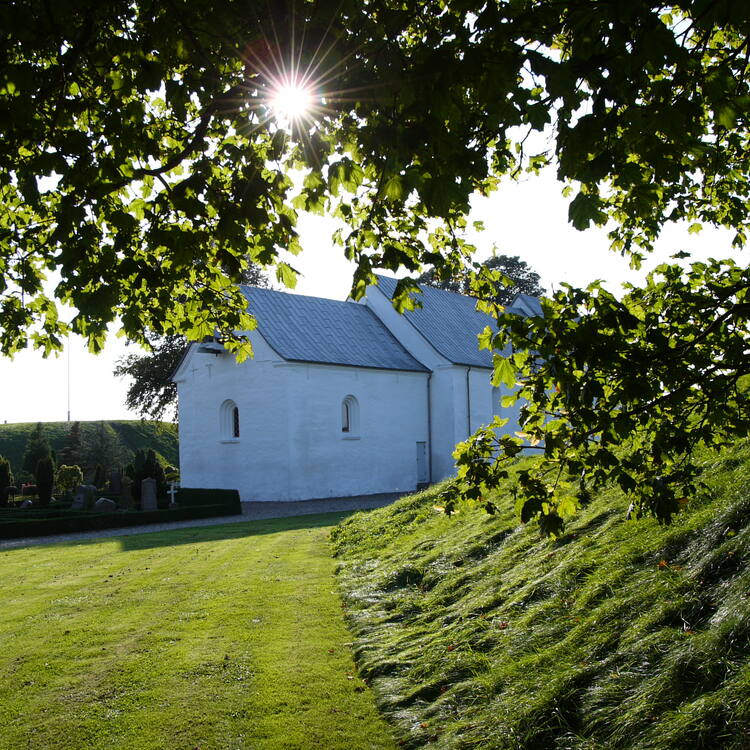 Located in central Jutland, Jelling was a royal monument during the reigns of Gorm, and his son Harald Bluetooth, in the 10th century, and may possibly pre-date this era. The complex consists of two flat-topped mounds, 70 metres in diameter and up to 11 metres high, which are almost identical in shape and size and construction, being built of turf, carefully stacked in even layers, with the grass side facing downwards. After introducing Christianity into Denmark, and integrating Norway with the country, Harald Bluetooth proclaimed his achievements by erecting a stone between the two mounds and building the first wooden church at Jelling.

The large runic stone is located exactly midway between the two mounds. Its incised inscription, beneath an inscribed interlaced Nordic dragon, reads "King Harald bade this monument be made in memory of Gorm his father and Thyra his mother, that Harald who won for himself all Denmark and Norway and made the Danes Christians". On the south-west face is the earliest depiction of Christ in Scandinavia, with an inscription relating to the conversion of the Danes to Christianity between 953 and 965. The original position of an adjacent smaller runic stone is not known. However, the stone has been in its present location since about 1630. Its inscription reads "King Gorm made this monument to his wife Thyra, Denmark's ornament". A small simple church of whitewashed stone is on the site of at least three earlier wooden churches, all of which were destroyed by fire. Excavations in 2006 have revealed evidence of a magnificent palisade surrounding the monument, and parts of a ship setting of unknown dimension.

Marking the beginning of the conversion of the Scandinavian people to Christianity, the Jelling Mounds, runic stones and church are outstanding manifestations of an event of exceptional importance. This transition between pagan and Christian beliefs is vividly illustrated by the successive pagan burial mounds, one pagan runic stone, another commemorating the introduction of Christianity, and the emergence of the church representing Christian predominance. The complex is exceptional in Scandinavia, and the rest of Europe.

Criterion (iii): The Jelling complex, and especially the pagan burial mounds and the two runic stones, are outstanding examples of the pagan Nordic culture.

Expressing the value of the property, the Jelling Mounds, Runic Stones and Church collectively provide the three fundamental and significant elements. In 2006, related parts of a palisade, and indications of a much larger ship setting, were excavated. These discoveries are currently being subject to further investigations by the National Museum, and the Museum of Vejle. The setting of the property greatly contributes to its visual integrity. A road to the south and west of the property impacts on this to a degree.

The two large Jelling Mounds have retained their original form. The North mound was constructed over an impressive burial chamber of oak that was cut into an earlier Bronze Age barrow of much smaller dimension. The South mound contains no burial chamber. The National Museum has carried out several scientific excavations, retaining the finds and documentation in its archives. The continuous use of the cemetery and the present church, through its predecessors, extends more than 1000 years back in time.

Changes have been limited to some, inevitable, one thousand years of weathering but this has impacted on the inscriptions on the two Runic Stones and made them highly vulnerable to further erosion.

The Church is protected under the Churches and Churchyards Consolidated Act of 1992. This requires any alteration to it to be approved by the diocesan authorities after consulting the National Museum and the Royal Inspector of Listed State Buildings. Under the same statue, the church is surrounded by a buffer zone of 300m. This prohibits the erection of buildings over 8.5m in height. A conservation order is in force for a distance of 1000m into the area north of Jelling to prevent the erection of any building or forestation, so that an uninterrupted view of the monument from this direction is maintained.

The Town Plan regulates the development of Jelling and, in 2009, the Town Council of Vejle adopted a plan for the surroundings of the monument. This plan emphasizes the need for moving the present road away from the monument, and for demolishing a number of neighbouring houses in order to establish a proper buffer zone to contain the area surrounded by the palisade.

In order to fulfil the protection of the values and preservation of the site, the Town Council of Vejle cooperates with the Heritage Agency of Denmark and the National Museum in order to implement the plan for the surroundings of the monument. This planned work will begin in 2010 and is due to be completed in 2013.

The management plan for the property will be reviewed in 2010.

In order to protect the Runic Stones from further erosion and keep them in their original position there is an urgent need to provide them with protection from the weather. An architectural competition was initiated in the autumn of 2009 to address this issue. The competition winner was announced during early 2010, and the result may imply construction work that will be fully consulted upon.

An extension of the buffer zone, to strengthen the relationship between the property and its setting, is being planned and this will decisively contribute to the integrated value of the whole monument and its environment. A road near the southern mound will be removed in accordance with the planned buffer zone extension.

2009
top
Forgot your username or password?
Become a member