A great concentration of ancestral Pueblo Indian dwellings, built from the 6th to the 12th century, can be found on the Mesa Verde plateau in south-west Colorado at an altitude of more than 2,600 m. Some 4,400 sites have been recorded, including villages built on the Mesa top. There are also imposing cliff dwellings, built of stone and comprising more than 100 rooms. 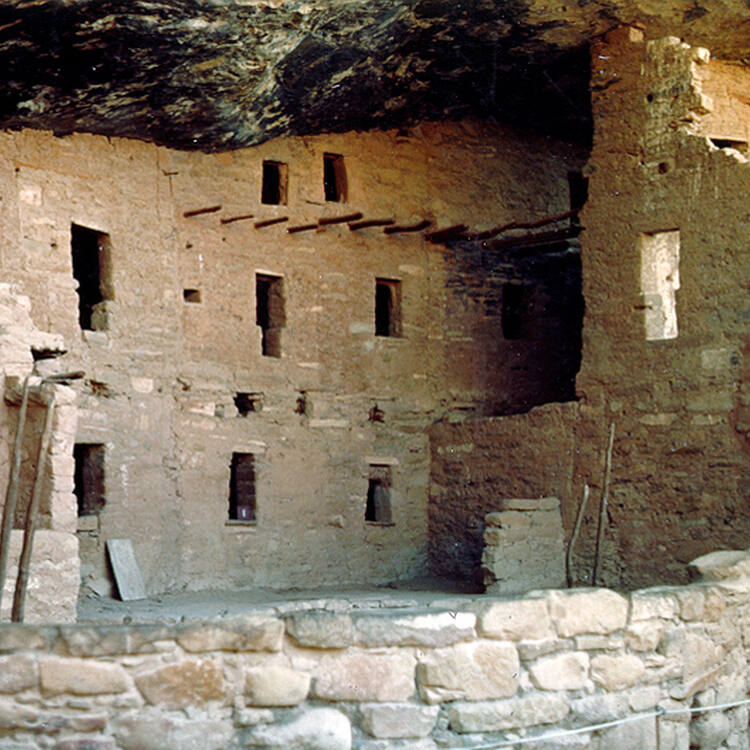 The Mesa Verde landscape is a remarkably well-preserved prehistoric settlement landscape of the Ancestral Puebloan culture, which lasted for almost nine hundred years from c. 450 to 1300. This plateau in southwest Colorado, which sits at an altitude of more than 2,600 meters, contains a great concentration of spectacular Pueblo Indian dwellings, including the well-known cliff dwellings. This rich landscape provides a remarkable archaeological laboratory for enhancing our understanding of the Ancestral Puebloan people.

Some 600 cliff dwellings built of sandstone and mud mortar have been recorded within Mesa Verde National Park – including the famous multi-storey Cliff Palace, Balcony House, and Square Tower House – and an additional 4,300 archaeological sites have been discovered. The cliff dwelling sites range in size from small storage structures to large villages of 50 to 200 rooms. Many other archaeological sites, such as pit-house settlements and masonry-walled villages of varying size and complexity, are distributed over the mesas. Non-habitation sites include farming terraces and check dams, field houses, reservoirs and ditches, shrines and ceremonial features, as well as rock art. Mesa Verde represents a significant and living link between the Puebloan Peoples’ past and their present way of life.

Criterion (iii): The exceptional archaeological sites of the Mesa Verde landscape provide eloquent testimony to the ancient cultural traditions of Native American tribes. They represent a graphic link between the past and present ways of life of the Puebloan Peoples of the American Southwest.

Within the boundaries of the property are located all the elements necessary to understand and express the Outstanding Universal Value of Mesa Verde National Park, including habitation and non-habitation archaeological sites and features, as well as settlement patterns. Excavated sites have been stabilized and undergo routine monitoring, condition assessment, and preservation treatment, based on continuing research and consultation. The property is of sufficient size to adequately ensure the complete representation of the features and processes that convey the property’s significance, and does not suffer from adverse effects of development and/or neglect. There is no buffer zone for the property.

Mesa Verde National Park is authentic in terms of its forms and designs, materials and substance, location and setting, and spirit. Large portions of the sandstone and mud-mortar multi-storey buildings have survived intact in form and materials, a tribute to the engineering skills of these early peoples as well as the dry environment of the mesa’s alcoves. These architectural remains reflect the range of ancient Pueblo construction techniques as well as settlement patterns. Extensive research on both the structures and many artefacts has provided a wealth of information about the lifestyles of the former occupants.

Increased erosion following wildland fires poses a continuing threat to the property’s cultural values. However, management policies are in place to protect the resources to the greatest extent possible. The introduction of non-native invasive plant species has become a major problem. Furthermore, the potential exists for future development in the corridor along Highway 160, the northern boundary of the property.

Mesa Verde National Park was established by an Act of Congress in 1906, before the existence of the National Park Service itself, and was the first archaeological area in the world to be recognized and protected in this way. The eventual inclusion of the area within the National Park system gives it the highest possible level of protection, as it is owned and maintained by the federal government, and assures a high standard of interpretation and public access. Park staff consults regularly on interpretive materials, research and preservation of archaeological resources, and proposed construction plans with representatives from 26 culturally affiliated and traditionally associated Native American tribes and pueblos who consider Mesa Verde their ancestral home.

There is a General Management Plan for Mesa Verde National Park (1979). A long-term plan for the preservation of the 600 alcove sites was made possible through an Archaeological Site Conservation Program (1994). Ongoing efforts to enhance baseline information, condition assessments, and architectural documentation continue to inform both management decisions and interpretive materials. Carrying capacity and visitor impacts are carefully monitored, with policies in place to limit the impacts. Other plans on topics such as interpretation supplement the National Park’s General Management Plan.

Sustaining the Outstanding Universal Value of the property over time will require protecting resources from erosion and other damage caused by wildland fires and other effects of climate change; managing invasive plant species that harm or may harm cultural resources; and ensuring that any development adjacent to the property does not have a negative impact on the property’s value, authenticity and integrity.