Situated in the Cordillera Blanca, the world's highest tropical mountain range, Mount Huascarán rises to 6,768 m above sea-level. The deep ravines watered by numerous torrents, the glacial lakes and the variety of the vegetation make it a site of spectacular beauty. It is the home of such species as the spectacled bear and the Andean condor. 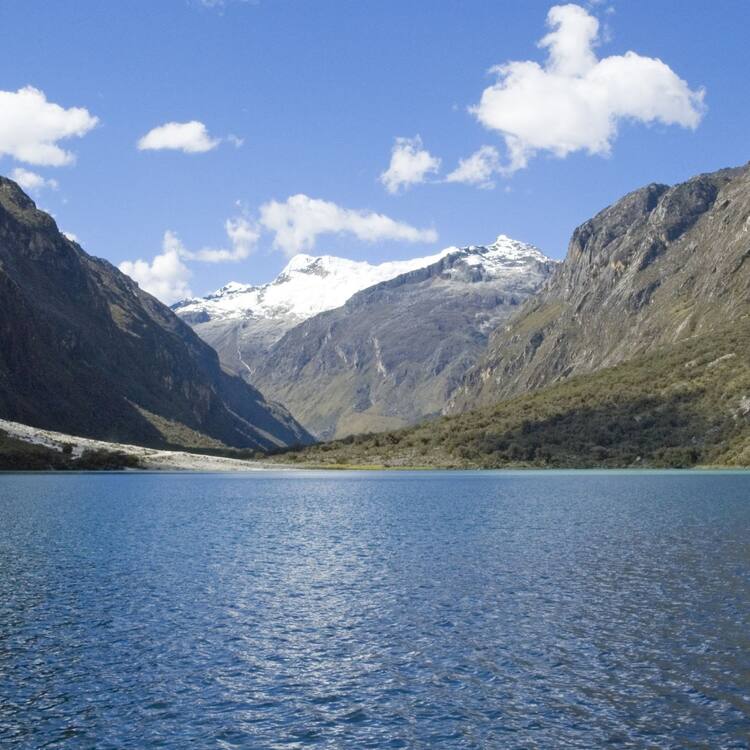 Situated in the aptly named Cordillera Blanca ("White Mountains"), Huascaran National Park protects the heart of the World's highest tropical mountain range in the central Peruvian Andes. The property of 340,000 hectares covers a diverse mountain landscape from around 2,500 m.a.s.l. and culminating in 27 snow-capped peaks above 6,000 m.a.s.l. It includes the spectacular Nevado Huascaran (Mount Huascaran), Peru's highest peak at 6,768 m.a.s.l., as the property named after the 16th Century Inca leader Huascar. The snow-covered peaks, the numerous tropical glaciers and glacial lakes, the high plateaus intersected by deep ravines with torrential creeks and the variety of vegetation types form a spectacular landscape of rare beauty.

Appreciating the geomorphology and striking landscape beauty it is easy to overlook that the property also boasts noteworthy ecosystem and biodiversity values. The wide range of ecosystems and vegetation types includes small pockets of montane tropical forests in some of the lower elevations and valleys. Diverse types of Paramo and Puna grasslands and scrublands are the dominant vegetation types in the property, at higher elevations transitioning into tropical tundra. Huascaran National Park is home to the emblematic Vicuna, which was close to extinction in the 1960s but has since recovered, one of the most spectacular conservation successes in South America. Other charismatic mammals include the North Andean Deer, Puma or Mountain Lion, the vulnerable Spectacled Bear and the endangered Andean Mountain Cat. The avifauna boasts more than 100 recorded species, among them the Andean Condor and the Giant Hummingbird. Around 800 plant species have been documented, the most famous being the endangered Queen of the Andes, known for its giant flower-spike. The entire region has been settled for millennia, as evidenced by the many pre-Columbian manifestations in and around the property. Early inhabitants left remnants of agricultural terraces and corrals, as well as roads, dams and water canals. Moreover, there are noteworthy cave paintings, stone tombs and countless artefacts.

Criterion (vii) : Huascaran National Park covers a considerable part of the Cordillera Blanca, the highest tropical mountain range in the World. The most overwhelming visual feature is the aggregation of 27 snow-capped peaks above 6,000 m.a.s.l, in particular the Nevado Huascaran or Mount Huascaran, Peru's highest elevation at 6,768 m.a.s.l. From the property's lowest elevations at around 2500 m.a.s.l. to the summits, there is a stunning altitudinal difference of more than 4 kilometres spanning varied and rugged terrain and vegetation. The snow-covered peaks, the tropical glaciers and glacial lakes, the high plateaus intersected by torrential creeks running in deep ravines and the variety of vegetation types form a spectacular landscape of rare beauty. Among the rich flora, the famous Queen of the Andes, known for its colossal inflorescence, stands out. The diverse fauna includes charismatic mammals and birds, such as Vicuna, Spectacled Bear and Puma, as well as the Andean Condor and the Giant Hummingbird.

Criterion (viii) : Huascaran is located in the High Andes and includes high plateaus of Puna grasslands, where 6,000 m peaks and glaciers form a globally notable mountainous region, including over 600 glaciers, almost 300 lakes and 41 tributaries of three important rivers: the Santa, Pativilca and Maranon. Underlying the exceptional landscape of Huascaran National Park is a broad spectrum of remarkable ongoing geological features and processes shaping the impressive geomorphology. The area's geological history and structures are very complex, with serrated peaks and the rugged topography originate from the uplifting of Mesozoic sediments, which were severely folded and faulted by complex tectonic activity at the end of the Cretaceous period and subject to volcanism in the Pliocene and Pleistocene epochs. To this day there is strong seismic activity in the area, major earthquakes, such as in 1945, 1962 and 1970 serving as cruel reminders. Glaciation is a major element in the geomorphology and hydrology of the property. It is estimated that as much a quarter of the volume of glacial ice in the Cordillera may have disappeared since the late 1960s, a process which is likely to further change the visual face of Huascaran National Park.

Huascaran National Park covers a large area of rugged mountain terrain featuring a broad array of the natural values of this part and elevation of the Tropical Andes. The even larger biosphere reserve, of which the property constitutes the core zone, covers the Cordillera Blanca almost in its entirety, thereby offering a chance to manage the property at the landscape level. Natural factors contributing to the integrity of Huascaran National Park include the high altitude, severe weather conditions and rough topography. The contemporary impacts from activities and threats within the park are relatively modest and appear to be manageable. More complex threats to the long term integrity of Huascaran National Park stem from the intensively used surrounding valleys outside of the boundaries of the property and interest in mineral extraction. While inscribed on the World Heritage List for its nature conservation values, Huascaran is also renowned for its archaeological values. A significant part of the remains of bygone cultures appears to have escaped looting, benefitting from remote locations and harsh environmental conditions in vast areas of the property. The future integrity of Huascaran National Park will depend on responses to threats to both the natural and cultural values of this extraordinary part of the High Andes.

In the 1960s, the imminent extinction of the overhunted Vicuna, a native Andean camelid, and concerns about the emblematic Queen of the Andes, triggered the creation of a monitoring zone in what is today part of the property. Subsequently, Huascaran National Park was established in 1975 by Supreme Decree under the overall framework of the national legislation on forest and wildlife. The national park also constitutes the core zone of Huascaran Biosphere Reserve since recognition of the latter by UNESCO in 1977. Originally under the authority of the Ministry of Agriculture, Huascaran National Park and the much larger biosphere reserve are today managed by the National Service of Protected Areas, SERNANP, under the Ministry of the Environment. Provided adequate management this allows for a comprehensive conservation and management approach that includes the populated and intensively used valleys adjacent to the property. The management of the property is to be guided by a Master Plan and a local Committee to ensure participation of local communities.

Since the establishment of the national park, a major bottleneck has been inadequate budgets and staffing, restricting the effectiveness of the national park. This renders it difficult to respond to the many challenges Huascaran faces. Within the property there is a small but growing number of residents. Their presence goes back to customary rights predating the national park and requires negotiation of agreements as regards their use of natural resources, in particular livestock grazing. The many communities near the property are growing, most importantly in the Callejon de Huaylas, an intensively used valley just West of Huascaran National Park. Despite seemingly clear legislation banning all mineral resource extraction in national parks, there is not only interest in the resources but there are concessions within the property and plans for dam construction in the property. A potentially less damaging activity could be tourism, as the spectacular landscape and important archaeological values already draws important numbers of domestic and international tourists, including highly specialized mountaineers. While bearing the risk of undesired environmental and cultural impacts, there are opportunities for the local economy, conservation financing and visitor education. An overarching challenge requiring monitoring and preparedness are the quickly receding glaciers, the primary source of life in the property and livelihoods in the intensively used adjacent valleys.