Located inside the Arctic Circle in the central part of West Greenland, the property contains the remains of 4,200 years of human history. It is a cultural landscape which bears witness to its creators’ hunting of land and sea animals, seasonal migrations and a rich and well-preserved tangible and intangible cultural heritage linked to climate, navigation and medicine. The features of the property include large winter houses and evidence of caribou hunting, as well as archaeological sites from Paleo-Inuit and Inuit cultures. The cultural landscape includes seven key localities, from Nipisat in the west to Aasivissuit, near the ice cap in the east. It bears testimony to the resilience of the human cultures of the region and their traditions of seasonal migration. 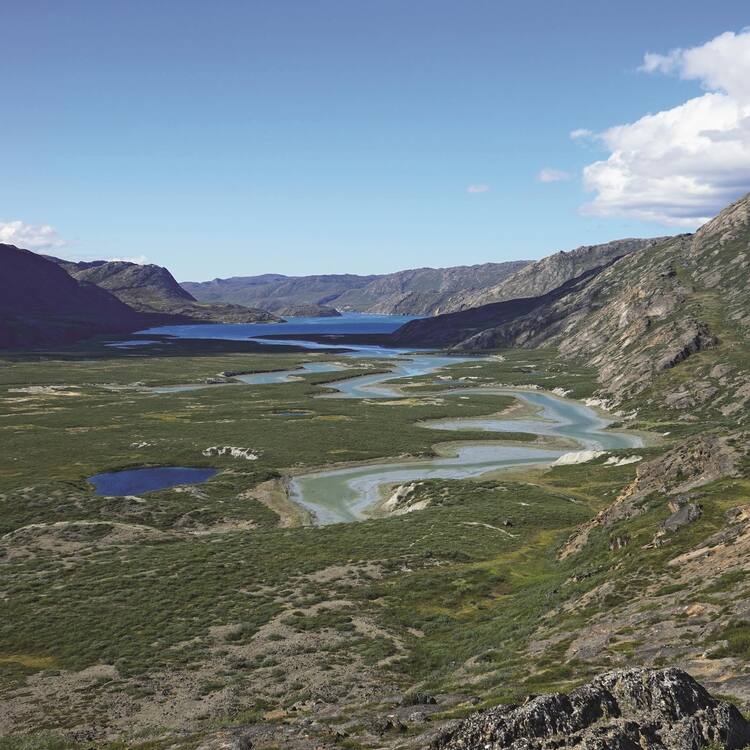 Looking west from the valley of Itineq towards the head of the fjord of Maligiaq. © Jens Fog Jensen

Climate and topography in West Greenland along a vast west-to-east transect from the ocean and fjords to the ice sheet contains evidence of 4200 years of human history. Fisher-hunter-gatherer cultures have created an organically evolved and continuing cultural landscape based on hunting of land and sea animals, seasonal migrations and settlement patterns, and a rich and well-preserved material and intangible cultural heritage. Large communal winter houses and evidence of communal hunting of caribou via hides and drive systems are distinctive characteristics, along with archaeological sites from the Saqqaq (2500-700 BC), Dorset (800 BC-1 AD), Thule Inuit (from the 13th century) and colonial periods (from the 18th century). The cultural landscape is presented through the histories and landscapes of seven key localities from Nipisat in the west, to Aasivissuit, near the ice cap, in the east. The attributes of the property include buildings, structures, archaeological sites and artefacts associated with the history of the human occupation of the landscape; the landforms and ecosystems of the ice cap, fjords, lakes; natural resources, such as caribou, and other plant and animal species that support the hunting and fishing cultural practices; and the Inuit intangible cultural heritage and traditional knowledge of the environment, weather, navigation, shelter, foods and medicines.

Criterion (v): Aasivisuit-Nipisat and the transect of environments it contains demonstrates the resilience of the human cultures of this region and their traditions of seasonal migration. The abundant evidence of culture-nature interactions over several millennia, intact and dynamic natural landscape, intangible cultural heritage and continuing hunting and seasonal movements by Inuit people and other attributes combine in this distinctive cultural landscape. This is demonstrated through the continuing uses of the west/east routes, the rich archaeological record of Palaeo-Inuit and Inuit cultures, and the camps and hunting elements that enabled hunting-fishing-gathering peoples to live in the Arctic region.

The integrity of the cultural landscape is based on the inclusion of areas of ocean, fjords, islands, inland and ice cap that can demonstrate the historical and present-day migrations and seasonal patterns of hunting and fishing. The property contains a sufficient sequence of environments, archaeological sites and settlements to demonstrate the cultural histories and significant intangible cultural heritage of this part of Greenland, including the settlements and the seasonal hunting, fishing and gathering activities of the present-day communities. Seven key localities have been specifically described, although attributes of Outstanding Universal Value occur throughout the property, and are potentially vulnerable due to pressures from climate change.

The authenticity of the cultural landscape is based on the inclusion of a complete landscape and seascape, the interdependence of the fishing-hunting-gathering lifeways with the natural processes and resources, and the tangible evidence of the hunting and settlement practices and patterns for 4200 years. The transect of environments from the sea, fjords, interior and the ice cap has been used by each phase of human culture for fishing and hunting of marine animals and caribou, according to seasonal movements. Archaeological sites and artefacts demonstrating a good state of preservation, and the ruins of historical structures bear witness to the history and traditions of land and sea uses in the Arctic. The continuity of some of the seasonal hunting and migration practices, and the associated Inuit intangible cultural heritage and traditional knowledge contribute to the authenticity of the cultural landscape.

The government of Greenland is responsible for decisions about land and sea use, and protection of the cultural landscape is subject to an Executive Order of the Government of Greenland (Naalakkersuisut) which came into force on 1 February 2018. This provides the basis of the legal protection for the property, including the formal establishment of the boundary, and provisions for access, protection, management, monitoring and uses. The regulations to the Executive Order and the Mineral Resources Act prevent the granting of licenses for mining prospecting or exploration. Further legal protection of the cultural landscape is provided by Greenland’s Heritage Protection Act, Museum Act, and the Planning Act. The Greenland National Museum and Archives is responsible for decisions within the Heritage Protection Act. The Municipal Plan for the Qeqqata Municipality covers relevant planning regulations for the property, such as for local tourism, infrastructures, zoning for wilderness, summer houses, recreation and trophy hunting and matters concerning the settlement at Sarfannguit.

Protection of the landscape and natural attributes is provided by the Act on Environmental Protection and the Ramsar Executive Order (2016). There are regulations for catch quotas for fish, sea mammals and inland hunting species (such as caribou). There is a need to integrate the Ramsar criteria for the Eqalummiut Nunaat and Nassuttuup Nunaa area into the overall management plan for the property.

Because there is no buffer zone for this property, there are continuing needs to strengthen mechanisms for assessment and protection of the property from off-site activities, including the potential hydrological and geological impacts of future mining proposals, transportation infrastructure and wind turbine installations. Greater attention and detailed planning is needed for the area’s future tourism management, including monitoring of the social and physical impacts of tourism.

The Management Plan (January 2017) provides a sound framework for decision-making, together with the operation of the 10-member World Heritage Steering Committee. The Management Plan outlines responsibilities of the Danish Agency for Culture and Palaces, the Government of Greenland, and the Qeqqata Municipality. The availability of the resources for implementation of the management system should be confirmed, including the timeline, expertise and financial resources to engage appropriately skilled site manager and rangers, and to develop the tourism and interpretation plans.  Continuing documentation of cultural practices and intangible culture heritage, and regular and cyclical monitoring and maintenance are needed as a priority.