North of the Great Wall, the Site of Xanadu encompasses the remains of Kublai Khan’s legendary capital city, designed by the Mongol ruler’s Chinese advisor Liu Bingzhdong in 1256. Over a surface area of 25,000 ha, the site was a unique attempt to assimilate the nomadic Mongolian and Han Chinese cultures. From this base, Kublai Khan established the Yuan dynasty that ruled China over a century, extending its boundaries across Asia. The religious debate that took place here resulted in the dissemination of Tibetan Buddhism over north-east Asia, a cultural and religious tradition still practised in many areas today. The site was planned according to traditional Chinese feng shui in relation to the nearby mountains and river. It features the remains of the city, including temples, palaces, tombs, nomadic encampments and the Tiefan’gang Canal, along with other waterworks. 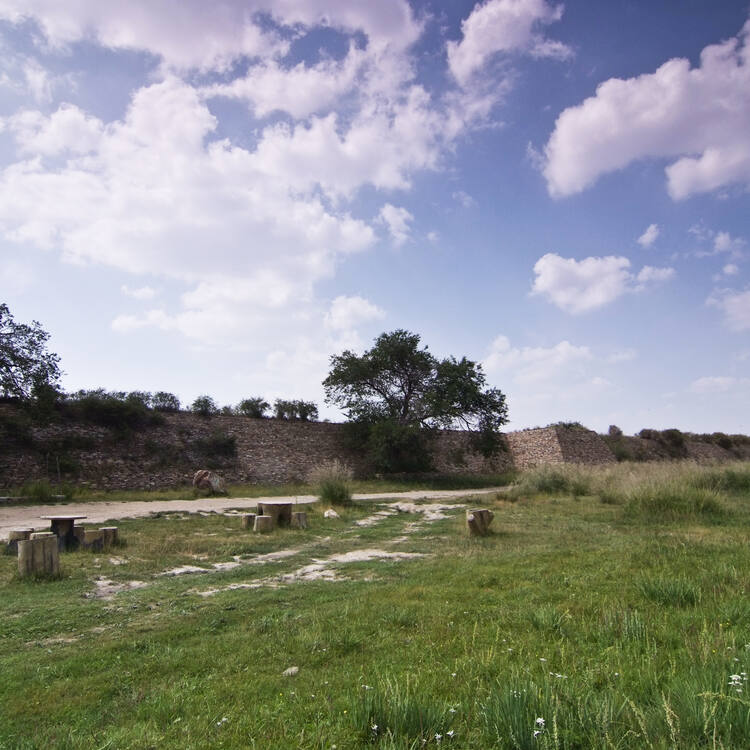 The Site of Xanadu is the site of a grassland capital characteristic of cultural fusion, witnessing clashes and mutual assimilation between the nomadic and agrarian civilisations in northern Asia. Located on the southeast edge of the Mongolian plateau, it was the first capital (1263-1273) of Kublai Khan and later the summer capital (1274-1364) of the Yuan Dynasty. The city site and associated tombs are located on the grassland steppe with a north south axis determined by traditional Chinese feng shui principles, backed by mountains to the north and a river to the south.

From Xanadu, the mounted warriors of Kublai Khan unified the agrarian civilisations of China, and partly assimilated to the latter’s culture, while extending the Yuan empire right across North Asia. The plan of Xanadu, with Palace and Imperial cities enclosed partly by the Outer City containing evidence of the nomadic encampments and royal hunting enclosure, comprises a unique example of this cultural fusion. Evidence of large water control works instigated to protect the city exists in the form of remains of the Tiefan’gan Canal. As the place where Kublai Khan rose to power, hosted religious debates and entertained foreign travellers whose writings gave inspiration down the centuries, it has achieved legendary status in the rest of the world and is the place from where Tibetan Buddhism expanded.

Criterion (ii): The location and environment of the Site of Xanadu exhibits influence from both Mongolian and Han Chinese values and lifestyles. The city site exhibits an urban planning pattern indicative of integration of the two ethnicities. From the combination of Mongolian and Han ideas and institutions the Yuan Dynasty was able to extend its control over an extremely large part of the known world at that time. The Site of Xanadu is a unique example of an integrated city plan involving different ethnic communities.

Criterion (iii): The Site of Xanadu is exceptional testimony to the supreme rule of the Yuan conqueror Kublai Khan, the assimilation and conversion to the culture and political system of the conquered, and the determination and effort of the conqueror in adhering to and maintaining the original cultural traditions.

Criterion (iv):The site location and environment of the Site of Xanadu together with its urban pattern demonstrates a coexistence and fusion of nomadic and farming cultures. The combination of a Han city plan with the gardens and landscape necessary to the Yuan dynasty’s Mongolian lifestyle at Xanadu resulted in an outstanding example of urban layout that illustrates a significant stage in human history.

Criterion (vi):The city of Xanadu hosted the great debate between Buddhism and Taoism in the 13th century, an event that resulted in dissemination of Tibetan Buddhism over North-east Asia.

The Site of Xanadu was abandoned in 1430. The large archaeological site now generally covered by grassland preserves the overall urban plan and city site of Xanadu as built and used in the 13th and 14th centuries. Wall lines of the Palace City, Imperial City and Outer City which together display the traditional urban planning of central China and arrangements for Mongolian tribal meetings and hunting can be clearly perceived, as can mounds indicating palace and temple buildings, some of which have been excavated, recorded and reburied. The remains of the neighbourhoods outside the gates, Tiefan’gan canal and the tomb areas, all within their natural and cultural environment. The latter preserves the natural elements crucial for the siting of the city – mountains to the north and water to the south, together with the four existing types of grassland landscape, especially the Xar Tala Globeflower plain associated with the river wetlands. The Site of Xanadu can be clearly read in the landscape.

Archaeological excavation and historical records bear witness to the authenticity of the property as representing the interchange between Mongolian and Han people in terms of capital design, historical layout and building materials. The Tombs authenticate the historical claims concerning the life of both Mongolian and Han people in Xanadu. Apart from repairs to the Mingde Gate and the east wall of the Imperial City, there has been minimal intervention in the structure. The geographical environment and grassland landscape are intact and still convey the environmental setting and spatial feeling of the grassland capital.

The property is protected variously by the laws of the State, the Region and the Municipality. A limited area covering Xanadu city and its neighbourhoods and the Tiefan’gan Canal is protected at State level under the Law of the People’s Republic of China on the Protection of Cultural Relics. A designated area including the Tombs of Zhenzi Hill is protected at the level of the Inner Mongolia Autonomous Region People’s Government; a designated area including the Tombs of Modot and the 12 designated Oboo sites are also protected at the level of Zhenglan Qi. The entire property will be submitted to the State Council of China in 2012 for approval as a National Priority Protected Cultural Heritage Site.

The grassland surrounding the protected site falls under the Grassland Law of the People’s Republic of China (promulgated in 1995, amended in 2002), and Grassland Regulations of Inner Mongolia Autonomous Region (promulgated in 1984, amended in 2004). Overall protection is provided by the Regulations on the Protection and Management of the Site of Xanadu in the Inner Mongolian Autonomous Region (2010), administered by Xilingol Meng. As a result of this legislation, farmland reclamation near the site has been controlled and the grassland eco-system and natural landscapes are conserved. The State protected area around the Xanadu city site and its neighbourhoods has been fenced, together with areas around the Tombs of Modot and Tombs of Zhenzi Hill.

Management of the property is co-ordinated by the Xilingol Meng Cultural Heritage Administration (Bureau/Office) of Xanadu, under the Xilingol Meng Conservation and Management Committee, guided by the Conservation and Management Plan for the Site of Xanadu (2009-2015). The aim is to achieve sustainable development of the local social economy while ensuring protection of the property. This requires a balance between conservation of the grassland ecology including control of desertification, and the needs of stakeholders in relation to livestock capacity and the rising demands of tourism. To this end the efficiency of heritage management is constantly being strengthened and improved.