Viticulture was introduced to this fertile region of Aquitaine by the Romans, and intensified in the Middle Ages. The Saint-Emilion area benefited from its location on the pilgrimage route to Santiago de Compostela and many churches, monasteries and hospices were built there from the 11th century onwards. It was granted the special status of a 'jurisdiction' during the period of English rule in the 12th century. It is an exceptional landscape devoted entirely to wine-growing, with many fine historic monuments in its towns and villages. 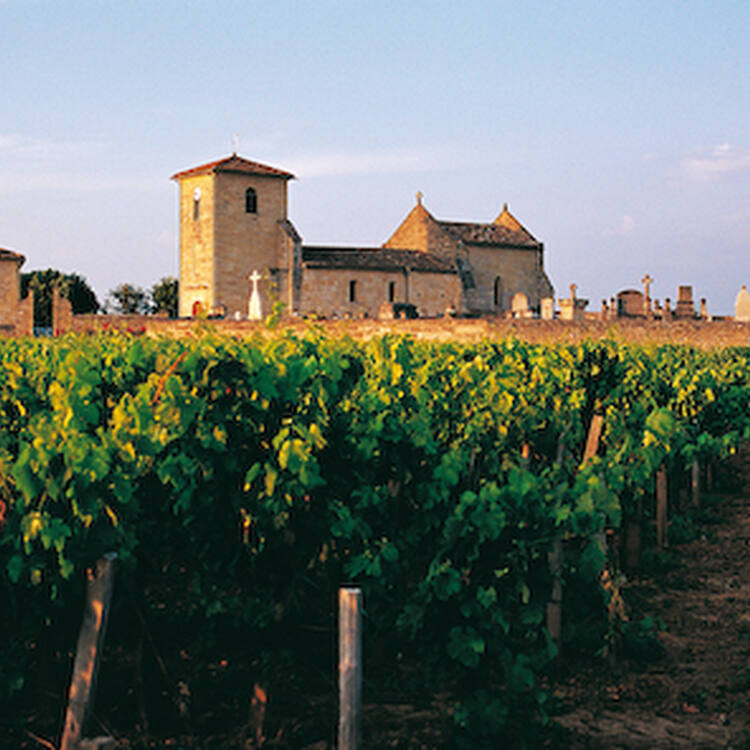 The territory of the Jurisdiction of Saint Emilion is located in the Nouvelle Aquitaine region, in the department of the Gironde. It covers 7,847 hectares. Delimited to the south by the Dordogne and to the north by the Barbanne stream, it is composed of a plateau (partly wooded), hillsides, concave valleys and a plain. Eight communes comprise the Jurisdiction, which was established in the 12th century by the King of England, John Lackland, Duke of Aquitane.

The landscape of the Jurisdiction of Saint Emilion is a monoculture, comprised exclusively of vines that were introduced intact and have remained active until today. Viticulture was introduced into this fertile region of Aquitaine by the Romans and intensified in the Middle Ages. The Saint Emilion territory benefited from its location of the Pilgrimage Route to Santiago de Compostela, and several churches, monasteries and hospices were built as of the 11th century.

This long wine growing history marked in a characteristic manner the monuments, architecture and landscape of the Jurisdiction. This alliance of the built and the natural, of stone, vine, wood and water, has created an eminent cultural landscape.

Before viticulture secured its place in the Middle Ages and the Renaissance, castles were built on dominant sites to serve seigniorial residencies. However, the “chateaux” of the vineyards were located in the centre of their domains. They date from the mid-18th century to the early 19th century.

The villages are characterized by modest stone houses dating from the early 19th century. Intended for the vineyard workers, they were never more than two storeys high and were grouped in small hamlets. The chais (wine storehouses) are large rectangular functional structures built in stone or a mixture of brick and stone, with tiled double-pitched roofs.

At Saint Emilion the most important religious monuments are the Hermitage or Grotto of Saint Emilion, the Monolithic Church with its bell tower, the medieval monastic catacombs and the Collegiate Church with its cloister. This ensemble, mostly Romanesque in origin, clusters around the pilgrimage centre of the hermit saint. There is also a group of secular monuments, including the massive keep of the Château du Roi and the ruins of the Palais Cardinal. Romanesque churches are present in each of the other seven villages. The enormous Pierrefitte menhir is in the commune of Saint-Sulpice-de-Faleyrens.

Criterion (iii):The Jurisdiction of Saint Emilion is an outstanding example of an historic vineyard landscape that has survived intact and in activity to the present day.

Criterion (iv): The historic Jurisdiction of Saint Emilion illustrates in an exceptional way the intensive cultivation of grapes for wine production in a precisely defined area.

The integrity of the landscape and the harmony offered by the ensemble of the site are due to the permanence of the vine culture, and the productive organization of the territory. The constructions or village ensembles do not correspond to a single architectural design, but are, as testifies the historic heart of Saint Emilion, the result of a long evolution over several centuries, from the 7th century and throughout the 19th and 21st centuries.

The communities have enjoyed the best part of the characteristics of the territory and develop their activities and life style, without destroying it. The culture of the land, the exploitation of the quarries, the urban establishments and development, and the construction of religious edifices and houses have all created a landscape in perfect harmony with the topography and resources of the place.

Although the Jurisdiction is today confronted with a decreasing population and the weakening of sub-soil due to the quarries, it remains a dynamic living territory, integrally conserving its wine growing tradition, looking to the future.

Apart from individual protection measures for buildings in application of the Heritage Code, (Historic Monuments), protection measures and town planning and enhancement documents ensuring the development of the territory have been established to preserve the site and to manage it in the continuity with its inscription on the World Heritage List: a voluntary heritage charter in 2001, a territorial project in 2004, a local urbanism plan for each of the eight communes in 2007, six of which are within the boundaries of the property and two in the buffer zone, as well as a protection zone for intercommunal architectural, urban and landscape heritage in 2007.

The Safeguarding and Enhancement Plan (PSMV) of the remarkable heritage site of the town of Saint Emilion was approved in 2010. A flood risk mitigation plan (PPRI) and a Plan for the Risk of Land Movement (PPRMT) for the concerned communities has also been prepared. A Management Plan for the property was also prepared in 2013. In particular, it deals with diminishing populations due to housing problems and the lack of available land resources and specifies development conditions for the property to render it compatible with the preservation of its Outstanding Universal Value. In cooperation with the services of the State, solutions are advocated to enable a better landscape integration of the recently constructed chais.

Seven Natural Zones of Ecological, Floral and Faunal Interest (ZNIEFF) concern the territory. These are sectors particularly characterised by their biological interest. The ZNIEFF of the communes of Saint Christophe des Bardes and Saint-Laurent des Combes protect the faunal and floral interest of the wooded “Mediterranean Belt” of the Jurisdiction. The Dordogne is concerned both by a ZNIEFF and by a Natura 2000 zone.