The property encompasses sites where the method of producing sparkling wines was developed on the principle of secondary fermentation in the bottle since the early 17th century to its early industrialization in the 19th century. The property is made up of three distinct ensembles: the historic vineyards of Hautvillers, Aÿ and Mareuil-sur-Aÿ, Saint-Nicaise Hill in Reims, and the Avenue de Champagne and Fort Chabrol in Epernay. These three components – the supply basin formed by the historic hillsides, the production sites (with their underground cellars) and the sales and distribution centres (the Champagne Houses) - illustrate the entire champagne production process. The property bears clear testimony to the development of a very specialized artisan activity that has become an agro-industrial enterprise. 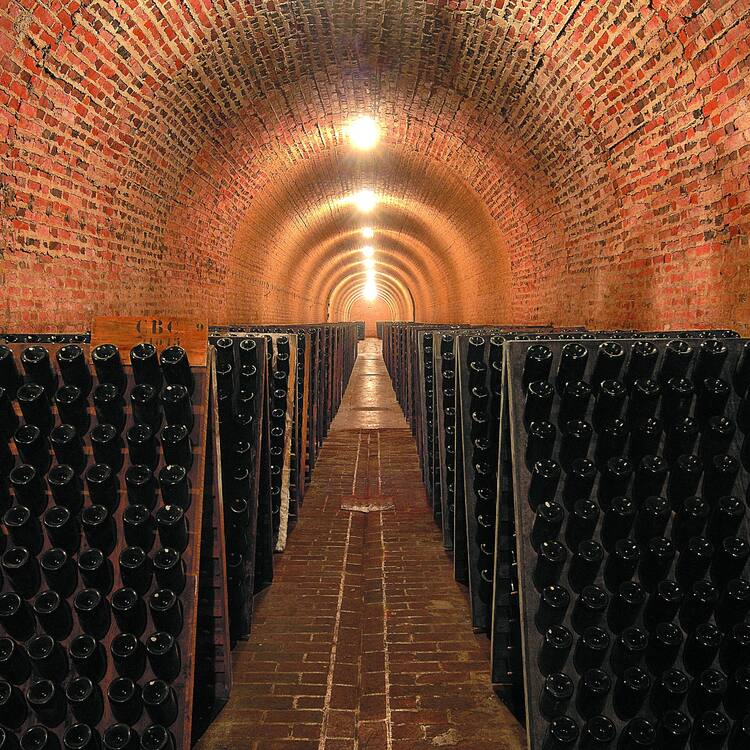 In north-east France, on cool, chalky land, the Champagne Hillsides, Houses and Cellars form a very specific agro-industrial landscape, with the vineyards as the supply basin and villages and urban districts concentrating the production and trading functions. The imperatives of Champagne wine production have resulted in an original, three-pronged organisation, based on functional town planning, prestigious architecture and an underground heritage. This agro-industrial system, which has structured not only the landscape but also the local economy and daily life, is the outcome of a long process of development, technical and social innovations, and industrial and commercial transformations, which speeded up the transition from an artisanal crop to mass production of a product sold around the world. Women and the Franco-German heirs of the old Champagne fairs played a special role in this evolution, which has its roots in Hautvillers, among the hills of Aÿ, the heart of the wine-growing sector. In the 18th and 19th centuries, it then spread to the two nearest towns, to Saint-Nicaise Hill in Reims and to Avenue de Champagne in Épernay, which were entirely built on the wine-growing activity of Champagne. The three ensembles that make up the property embody the Champagne terroir and serve as a living and a working environment and a showcase for traditional know-how. Patronage has also been a source of social innovation, the greatest emblem of which is the Chemin Vert garden city in Reims. This is the place where the benchmark method of producing sparkling wine was born, a method that would spread and be copied across the world from the 19th century up to the present day. Champagne is a product of excellence, renowned as the universal symbol of festiveness, celebration and reconciliation.

Criterion (iii): The Champagne Hillsides, Houses and Cellars are the outcome of expertise perfected over the generations, of exemplary inter-professional organisation and of the protection of the appellation, as well as the development of inter-cultural relations and social innovations over a long period of time, which women also took part in. Through the development of traditional know-how, the people of Champagne have overcome a number of obstacles, both in the vineyards (a harsh climate and rather infertile chalky soils), and in the wine-making process, through their mastery of sparkling wine production techniques, and in assembly and bottling. Champagne enterprise was able to gain from the technological and entrepreneurial contributions of the British and Germans. The equilibrium between wine-growers and the Champagne Houses led to the development of a pioneering inter-professional structure that is still active today.

Criterion (iv): As the legacy of wine-growing and wine-making practices perfected over the centuries, production in Champagne is founded on its supply basin (the vineyards), its processing sites (the vendangeoirs, where grapes are pressed, and the cellars) and its sales and distribution centres (the headquarters of the Houses). They are functionally intertwined and intrinsically linked to the chalky substratum where the vines grow, which is easy to hollow out and which is also found in the architecture. The production process specific to Champagne, based on secondary fermentation in the bottle, required a vast network of cellars. In Reims, the use of the former Gallo-Roman and medieval chalk quarries, and the digging of suitable cellars in Épernay or on the hillsides, led to the formation of an exceptional underground landscape – the hidden side of Champagne. As Champagne has been exported around the world since the 18th century, trade development resulted in a special kind of town planning, which integrated functional and showcasing goals: new districts were built around production and sale centres, linked to the vineyards and to transport routes.

Criterion (vi): The Champagne, Hillsides, Houses and Cellars, and particularly the Saint-Nicaise Hill, with its monumental quarry-cellars and its early Champagne Houses, and the Avenue of Champagne, with the showcasing spaces of the commerce houses, convey in an outstanding manner the unique and world-renowned image of Champagne as a symbol of the French art of living, of festiveness and celebration, of reconciliation and victory (particularly in sport). Literature, painting, caricatures, posters, music, cinema, photography and even comics all testify to the influence and the constancy of this unique wine's image.

The property includes the most representative and best preserved elements, testifying to the birth, production and spread of Champagne, through symbiotic functional and territorial organisation. The entire property has recovered from wars, the phylloxera crisis and the wine-growers’ revolts. The hillside villages, limited by the topography and high value of the vineyards, remain well preserved within their original limits. Landscape and plots have changed very little and the built heritage is still in good condition. Although it was bombarded during the First World War, Saint-Nicaise Hill was restored and has maintained its function. The chalk quarries are still used in Champagne production and the network of cellars is well preserved and still perfectly operational. Long-term safeguarding of the visual integrity of the property requires monitoring of large energy installations; whilst functional integrity may benefit from a program to restore bio-diversity, which may also contribute to Champagne specificity.

Extensive archival, written and iconographic documentation attests to the history and development of the Champagne story in the area, and to the minor changes to the visual qualities of the landscape. As was the case across the whole of Europe, phylloxera decimated the vines: the replanting of grafted, trellised vines, to replace ungrafted, bulk vines, did not lead to much visible change, although it does bear witness to this major crisis in wine-growing history. The hillsides of Hautvillers, Aÿ and Mareuil sur-Aÿ have exported their wine continuously for at least four centuries and testify to the vine-growing monoculture based on the oldest form of external trade in Champagne. The Champagne Houses have ensured the safeguarding of their architectural heritage, including the original decor and furniture, to a large extent, and they are still used for activities related to the Champagne enterprise.

The property benefits from a comprehensive protection scheme, applying the tools provided by regulations, contracts, land management and heritage-listing, and backed by French and European legislation.

Other tools strengthen this scheme ; for example, designated Aires de mise en Valeur de l’Architecture et du Patrimoine (AVAP) areas, or zones protected as secteur sauvegardé. The boundaries of the official Champagne appellation, comprising over 300 towns and villages, has been defined as a “commitment zone” within the management system. Here, the local communities, the wine growing profession and other stakeholders undertake, on a voluntary basis, to conserve and enhance their landscape and heritage. This commitment zone constitutes the setting and surroundings of the property, and is also a coherent historical and geographical ensemble, embodied by the property and without which its value cannot be understood. It allows for the implementation of extended management and ensures actions taken to enhance the landscape, heritage and the environmental are consistent with one another. To ensure effective conservation of the Outstanding Universal Value, a management structure has been set up, bringing together public and private stakeholders, project managers and representative bodies. The management plan for the Champagne Hillsides, Houses and Cellars is a tool for regional development as well as for protection. It incorporates the overall framework associated with the history of the property and its territory as it is both conceived and experienced.