Located in the mountain region of Świętokrzyskie, Krzemionki is an ensemble of four mining sites, dating from the Neolithic to the Bronze Age (about 3900 to 1600 BCE), dedicated to the extraction and processing of striped flint, which was mainly used for axe-making. With its underground mining structures, flint workshops and some 4,000 shafts and pits, the property features one of the most comprehensive prehistoric underground flint extraction and processing systems identified to date. The property provides information about life and work in prehistoric settlements and bears witness to an extinct cultural tradition. It is an exceptional testimony of the importance of the prehistoric period and of flint mining for tool production in human history. 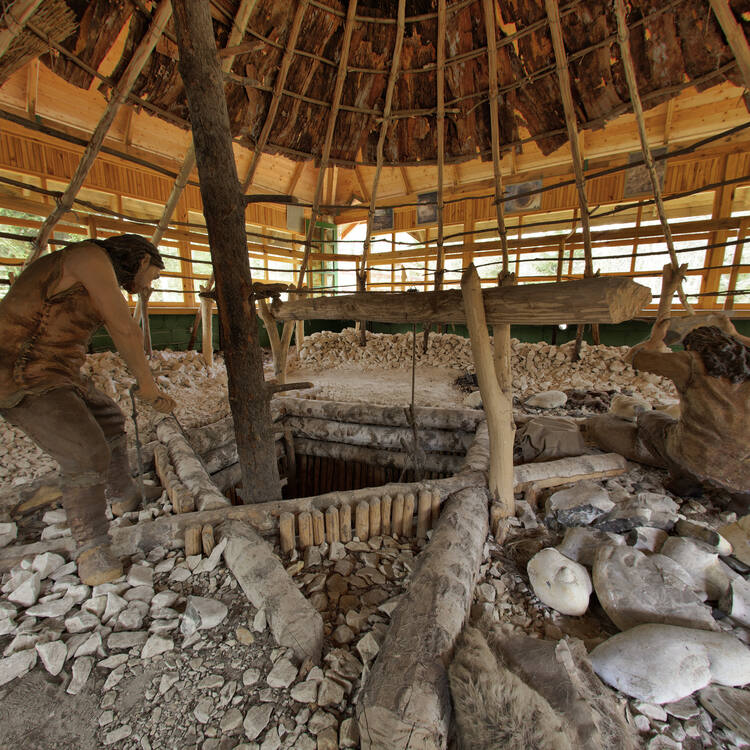 Krzemionki Prehistoric Striped Flint Mining Region (in short: Krzemionki) is located in the north-eastern fringe of the Świętokrzyskie (Holy Cross) Mountains in central Poland on both sides of Kamienna River. It is a serial property comprised of four component parts: the principal Krzemionki Opatowskie Mining Field; two smaller mining fields, Borownia and Korycizna, aligned on the same geological structure; and the Gawroniec prehistoric miners’ permanent settlement that received semi products of flint axes from the mines for finishing and polishing prior to distribution. The property dates from 3,900 BCE to 1,600 BCE (Neolithic to Early Bronze Age) and is one of the largest known complexes of its type in the Neolithic Period. It is also the most completely preserved and wholly readable socio-technical system of prehistoric underground flint mining and processing and illustrates the greatest range of prehistoric flint mining techniques known in a single property. Attributes include great chambers with a floor area of over 500 m2 that are unknown from any other site. At the property, a unique type of flint – striped flint banded in exceptional zebra-like patterns of alternating shades of grey – was mined and fashioned into axes and distributed in a verifiable radius of 650 km from the complex, in present-day Germany, Czech Republic, Slovakia, Ukraine, Belarus and Lithuania.

A diverse range of mine types are also identified with different surface expressions in a remarkably intact anthropogenic surface that presents a rare prehistoric industrial landscape of shaft depressions and up-cast waste, remnants of flint workshops, miners’ camps and communication routes. Gawroniec Settlement, integral to the functioning of the deposit management system, is a legible testimony to the organisation of a prehistoric community based around mining.

Criterion (iii): Krzemionki Prehistoric Striped Flint Mining Region is illustrative of the living and working patterns of settled prehistoric communities that distinguish the Neolithic period from that which preceded it. The serial property bears witness to the economic and social organisation of segments of the Neolithic society, which were linked to the extraction of flint and its use for the production of polished axes.

The attributes of the property, including the integral Gawroniec Settlement are further enhanced by the proven distribution of striped-flint axes that have been identified in a radius of over 650 km from the complex – the largest recorded range for prehistoric flint axes which act as significant indicators for prehistoric movements.

Criterion (iv): Krzemionki Prehistoric Striped Flint Mining Region represents an exceptional type of Neolithic mining landscape, bearing witness both to a complex technical and social system and to human adaptation to the conditions of natural resource exploitation that is a landmark in the history of mining. It provides evidence that the prehistoric period brought flint mining to produce tools in the largest known example for the prehistoric exploitation of flint. The serial property illustrates diverse underground prehistoric mining structures comprising open-pit, niche-gallery, gallery, pillar-chamber and chamber mines – and primary workshops, which survive intact in well over 4,000 shafts and pits.

Krzemionki Prehistoric Striped Flint Mining Region, as a whole, comprises the best preserved, most technically diverse and complete prehistoric flint mining assemblage known in a European context. All attributes necessary to express the Outstanding Universal Value are included in the serial property that represents the exploitation of the only known deposit of striped flint to be mined in prehistory. Principle features and attributes have been confirmed in detail using a combination of archaeological research methods, including Airborne Laser Scanning that has accurately mapped the sites in 3D under forest cover. The permanent settlement site, on a promontory in open agricultural fields, was archaeologically excavated in the late-1940s and 1950s and the boundary exceeds the archaeological site boundary that contains all known evidence of prehistoric settlement.

The property does not suffer from current adverse development or neglect. The preserved visual setting of the property is protected by means of restrictive buffer zone management and the rigorous application of heritage impact assessments including to quarries used in recent times.

Krzemionki Prehistoric Striped Flint Mining Region is authentic in all its attributes, expressed by information sources, that include: the well preserved form and structure of the underground structures, such as shafts, chambers, communication galleries, transport corridors, supporting pillars or waste heaps of mining and processing, as well as the aboveground industrial mining landscape consisting of shaft depressions and waste tips, remnants of flint workshops, miners’ camps and communication routes. The majority of the mining fields are left unexcavated. At Krzemionki Opatowskie Mining Field, a small segment of the mining field has been excavated archaeologically and, after some conservation work, illustrates a combination of attributes that have remained almost unchanged for over 5,000 years. Attributes of Gawroniec Settlement are equally easily legible in terms of location and setting, form, and archaeological evidence that is tangible proof of organisation and process directly tied to the mining fields. Archaeological excavations were conducted between 1947 and 1961 and apart from plentiful waste from flint processing, dateable evidence included pottery (large storage vessels, funnel-shaped flasks and vases, ceramic pipes, and ceramic weaving spindles) and organic remains which were radiocarbon-dated to between 3,500 and 3,200 BCE.

The property is under full legal protection in its entirety. The management system for Krzemionki Prehistoric Striped Flint Mining Region is implemented by the ‘Krzemionki’ Archaeological Museum and Reserve (Muzeum Archeologiczne i Rezerwat „Krzemionki”), a local museum which takes the lead role in the management and protection of Krzemionki. Its activity has been adapted and extended to the other three component parts in the series, as part of a new property management plan process. A cultural park is being created (2020-2025) to facilitate the preparation of a local spatial development plan in integration with the management plan, which will enable planned and coordinated execution of the tasks and protection of the wider setting of the property.