This property lies on the shores of the Volga River, south of its confluence with the River Kama, and south of the capital of Tatarstan, Kazan. It contains evidence of the medieval city of Bolgar, an early settlement of the civilization of Volga-Bolgars, which existed between the 7th and 15th centuries AD, and was the first capital of the Golden Horde in the 13th century. Bolgar represents the historical cultural exchanges and transformations of Eurasia over several centuries that played a pivotal role in the formation of civilizations, customs and cultural traditions. The property provides remarkable evidence of historic continuity and cultural diversity. It is a symbolic reminder of the acceptance of Islam by the Volga-Bolgars in AD 922 and remains a sacred pilgrimage destination to the Tatar Muslims. 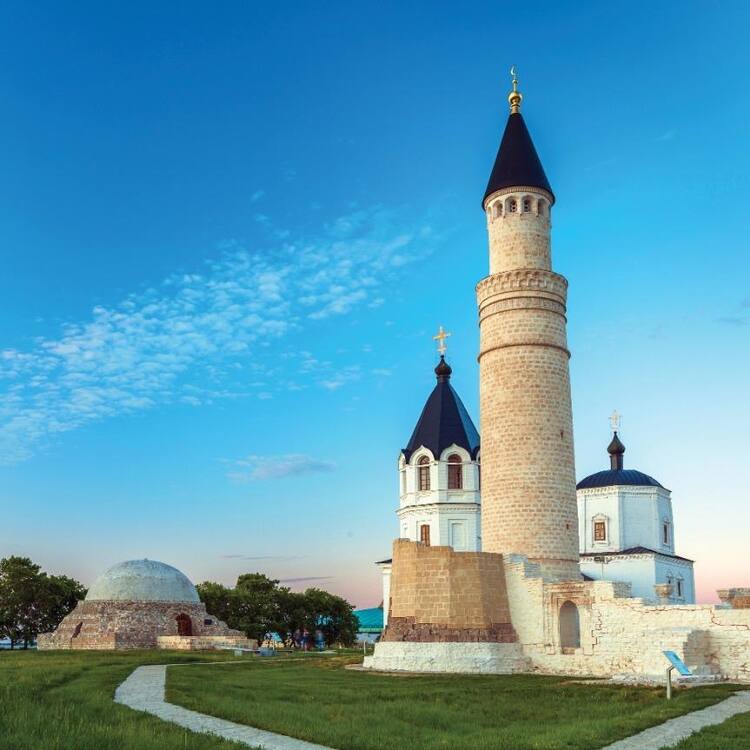 The historical and archaeological site of Bolgar lies on the shores of the Volga River south of its confluence with the River Kama. It contains evidence of the medieval city of Bolgar, an early settlement of the civilization of Volga Bolgars, which existed between the 7th and the 15th centuries. Bolgar was also the first capital of the Golden Horde in the 13th century and remained an important trade centre in the time of the Kazan Khanate. The site preserves its spatial context with its historic moat and walls as well as its religious and civil structures, including a former mosque, a minaret and several mausoleums, bath houses, remains of a Khan's palace and shrine.

Bolgar represents the historical cultural exchanges and transformations of Eurasia over several centuries, which played a pivotal role in the formation of civilizations, customs and cultural traditions. The Bolgar Historical and Archaeological Complex provides remarkable evidence of historic continuity and cultural diversity, the mutual influences of cultural traditions in particular at the time of the Volga Bolgars, the Golden Horde, the Kazan Khanate and the Russian state. Also, Bolgar was always located at the crossroads of trade, and economic, cultural and political communications and illustrates the interaction of nomadic and urban cultures. The historical and archaeological complex of Bolgar is a symbolic reminder of the acceptance of Islam by the Volga-Bolgars in 922 AD and, to Tatar Muslims, remains sacred and a pilgrimage destination.

Criterion (ii): The historical and archaeological complex of Bolgar illustrates the exchange and re-integration of several subsequent cultural traditions and rulers and reflects these in influences on architecture, city-planning and landscape design. The property illustrates the cultural exchanges of Turkic, Finno-Ugric, Slavic and other traditions. Evidence of exchanges in architectural styles includes wooden constructions which emerged in the forest-rich region, the steppe component of Turkic language tribes, oriental influences connected with the adoption of Islam and European-Russian styles which dominated after it became part of the Russian state.

Criterion (vi): Bolgar remains a regional reference point for Tatar Muslims and likely other Muslim groups of the wider region in Eurasia. It carries associated religious and spiritual values which are illustrated predominantly during the annual pilgrimage season. Bolgar provides evidence of an early and northernmost Muslim enclave established in connection with the official acceptance of Islam by the Volga Bolgars as the state religion in 922 AD, which had a lasting impact on the cultural and architectural development of the wider geographical region.

The historical and archaeological complex of Bolgar contains the complete area of layers of historic occupation by various consecutive civilizations on the upper plateau of the site and the outer ramparts of the city. It also integrates early parts of a Volga Bolgar settlement located in the northern lower level of the site and on the closest Volga island. The potential of large sectors of archaeological resources remains unknown so that the site retains strong potential for archaeological research.

The integrity of the property has suffered adverse effects from development over the past 3 centuries and the State Party has committed to improving the situation by removing a tent village set up for pilgrims during the annual pilgrimage season from the centre of the property. Although it appears that the construction of new infrastructure on the site has reached its completion, more sensitive planning is needed in the case of any future interventions or visitor interpretation and prior Heritage Impact Assessments (HIA’s) are absolutely necessary before any interventions can be approved by the World Heritage Centre in consultation with the Advisory Bodies.

The number of architectural and other interventions on site is substantial and has affected the authenticity of the overall complex and, in one instance, reduced the archaeological evidence providing testimony to the Volga Bolgar civilization. These also include past conservation activities at the property which included reconstructions and partial rebuilding works. In other places, restoration measures conducted were extensive, sometimes without clear justification and have reduced authenticity in material, substance, craftsmanship and setting.

On the other hand, the property’s ramparts and moat remain fully authentic, as well as the large-scale archaeological areas yet to be researched and surveyed. In addition, the religious reference function of Bolgar to Tatar Muslims retains a high level of authenticity, in particular with regard to the location, spirit and feeling which have not been affected by the recent addition of religious structures, built in support of the religious values. Tatar Muslims continue to venerate Bolgar as the origin of Islam in this region, and conduct annual pilgrimages to the historical and archaeological complex.

The monuments and archaeological remains within the property, including the so-called “Cathedral Mosque”, Black Chamber, North and East Mausoleums, the Khan’s Shrine, the Smaller Minaret and the Church of the Dormition, are registered as cultural heritage of national significance under the Federal Law on Properties of Cultural Heritage (Monuments of History and Culture) of Peoples of the Russian Federation (2002). In addition, the complete Bolgar State Historical and Architectural Cultural Preserve was placed on the List of Properties of Historic Importance based on the Edict of the President of the Russian Federation on the Confirmation of the Federal (all-Russia) Historical and Cultural Heritage List (1995). In 2013, the State Party adjusted the General Plan and Scheme of Bolgar Territorial Planning, which now stipulates that any significant changes in the buffer zone must get the permission of federal, regional and municipal executive bodies. It seems further understood that developments on site are only to be permitted in exceptional circumstances after approval from the UNESCO World Heritage Centre in consultation with the Advisory Bodies.

The Bolgar Historical and Archaeological Complex has its own management authority (site administration), which employs several academic heritage specialists in their respective fields. The administration is divided into four key sections dedicated to exhibitions and presentation, museum collections, research and public outreach as well as maintenance and security. The site administration reports via the Head Office for Conservation, Use, Promotion and Public Protection of Cultural Heritage to the Ministry of Culture of the Republic of Tatarstan. The funding available to the administration is generous and should preferably be utilized for non-intrusive research and adequate conservation and consolidation measures, rather than the creation of constructions which might not respect the conditions of integrity and authenticity of the property.

At the time of submission of the revised nomination dossier for this property, primary directions for a management plan were established and a number of focus areas have been identified including the coordination and administration of the property, as well as the continued study, conservation and management of archaeological sites and materials. These directions indicated that future research would focus on important questions about the site’s development and peculiarities of its formation and be based on non-destructive methods including technologies and methods used in natural sciences, aerial mapping and processing of space satellite information. The management plan needs to be finalized and be kept up-to-date to ensure the best possible management practices for the property.