The historic town of Guimarães is associated with the emergence of the Portuguese national identity in the 12th century. An exceptionally well-preserved and authentic example of the evolution of a medieval settlement into a modern town, its rich building typology exemplifies the specific development of Portuguese architecture from the 15th to 19th century through the consistent use of traditional building materials and techniques. 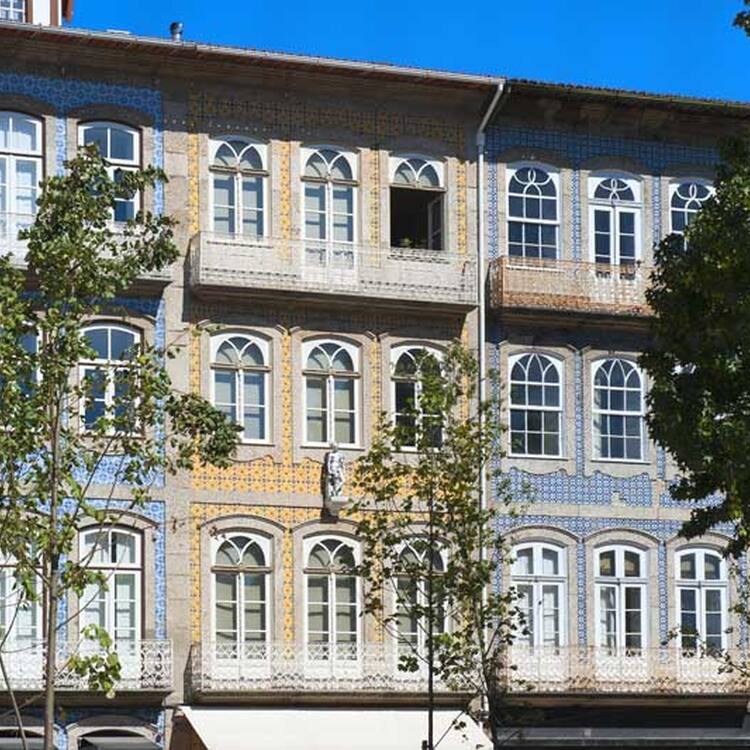 The exceptionally well preserved Historic Centre of Guimarães, located in the northern Portugal district of Braga, is often referred to as the cradle of the Portuguese nationality. The history of Guimarães is closely associated with the creation of the national identity and language of Portugal. The city was the feudal territory of the Portuguese Dukes who declared the independence of Portugal in the mid-12th century.

Founded in the 4th century, Guimarães became the first capital of Portugal in the 12th century. Its historic centre is an extremely well preserved and an authentic example of the evolution of a medieval settlement into a modern town, its rich building typology exemplifying the specific development of Portuguese architecture from the 15th to the 19th centuries through the consistent use of traditional building materials and techniques. This variety of different building types documents the responses to the evolving needs of the community. A particular type of construction developed here in the Middle Ages was used widely in the then Portuguese colonies. It featured a ground floor in granite with a half-timbered structure above, a technology that was transmitted to Portuguese colonies in Africa and the New World, becoming their characteristic feature.

The Historic Centre of Guimarães is distinguished in particular for the integrity of its historically authentic building stock. Examples from the period from 950 to 1498 include the two anchors around which Guimarães initially developed, the castle in the north and the monastic complex in the south. The period from 1498 to 1693 is characterized by noble houses and the development of civic facilities, city squares, etc. While there have been some changes during the modern era, the historic centre of Guimarães has maintained its medieval urban layout. The continuity in traditional technology and the maintenance and gradual change have contributed to an exceptionally harmonious townscape.

Criterion (ii): Guimarães is of considerable universal significance by virtue of the fact that specialized building techniques developed there in the Middle Ages were transmitted to Portuguese colonies in Africa and the New World, becoming their characteristic feature.

Criterion (iii): The early history of Guimarães is closely associated with the establishment of Portuguese national identity and the Portuguese language in the 12th century.

Criterion (iv): An exceptionally well preserved town, Guimarães illustrates the evolution of particular building types from the medieval settlement to the present-day city, and particularly in the 15th–19th centuries.

Within the boundaries of the 19,45 ha property are located all the elements necessary to express the Outstanding Universal Value the Historic Centre of Guimarães, including a particular type of construction developed in the Middle Ages using granite combined with a timber-framed structure, a technology that was diffused widely in the former Portuguese colonies of Africa and the New World, and a well-preserved historic building stock that represents the evolution of building typologies from the Middle Ages to the 19th century. This development is documented in the rich variety of different building types that have responded to the evolving needs of the community. The property does not suffer unduly from adverse effects of development and/or neglect. There is a 99,23 ha buffer zone, parts of which remain outside the protection zone. While norms for the protection of the historic centre exist, these have not been established for the buffer zone.

The Historic Centre of Guimarães is authentic in terms of its location and setting, forms and designs, and materials and substances. It has succeeded in preserving its historic stratigraphy and territorial integrity. Different phases of development are well integrated into the whole.

The Historic Centre of Guimarães is subject to several legal provisions regarding the protection of historic buildings, including Law No. 107/2001 of 8 September, Decree-Law No. 120/97 of 16 May, and Decree No. 3/98 of 26 January, and to legal provisions regarding town planning, including Decree-Law No. 38/382 of 7 August 1951, Decree-Law No. 445/91 of 20 November, and Decree-Law No. 250/94 of 15 October. Its master plan, which dates from 1994, includes regulations for the protection of the historic centre. The historic centre includes 14 historic buildings that are legally protected as National Monuments (8) or as properties of Public Interest (6), according to the Portuguese Law on the Protection of Historic Monuments. Apart from some State-owned properties, most of the building stock is privately owned. The public areas of the historic centre are the property of the Municipality of Guimarães. Management of the historic centre is the responsibility of the Local Technical Office for the Historic Centre of the Municipality (GTL), established in 1985. Any intervention related to listed buildings is under the control of the Directorate General for Cultural Heritage (DGPC). Sustaining the Outstanding Universal Value of the property over time will require preparing, approving, and implementing the required norms and regulations for the buffer zone.