Between the 16th and 20th centuries, a series of defensive structures was built at this strategic point in the Caribbean Sea to protect the city and the Bay of San Juan. They represent a fine display of European military architecture adapted to harbour sites on the American continent. 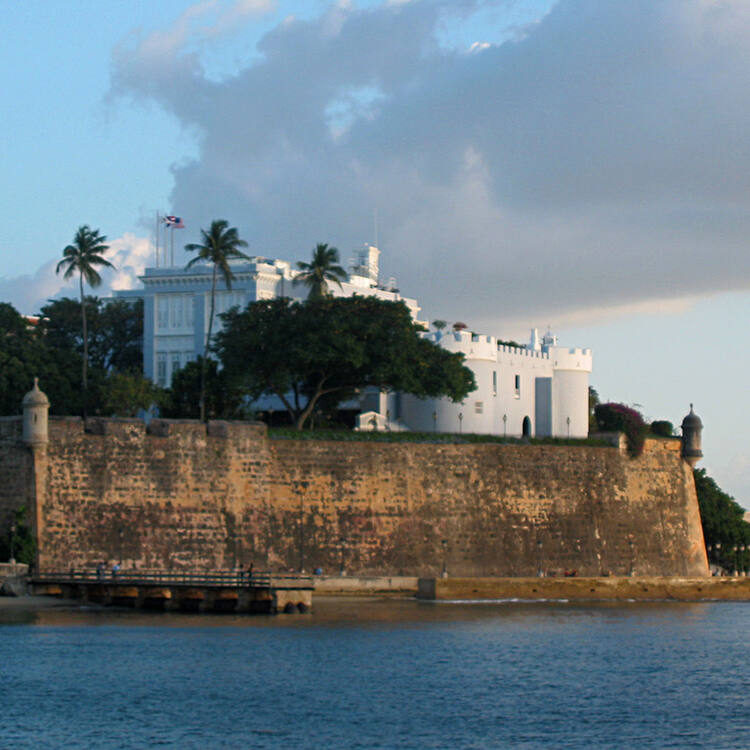 La Fortaleza, along with the later fortifications of Castillo San Felipe del Morro, Castillo San Cristóbal and San Juan de la Cruz (El Cañuelo), and a large portion of the original San Juan City Wall, were built between the 16th and 20th centuries to protect the city and the Bay of San Juan. They are characteristic examples of the historic methods of construction used in military architecture over this period, which adapted European designs and techniques to the special conditions of the Caribbean port cities. La Fortaleza has served as a fortress, an arsenal, a prison, and residence of the Governor-General, and today as the seat and residence of the Governor of Puerto Rico.

These fortifications, which retain the general appearance of advanced 18th-century defense technology, clearly illustrate both a transfer of technology from Europe to America over a long period and its adaptation to the topography of a strategically significant yet difficult tropical site. Reflecting Italian Renaissance, Baroque, and French Enlightenment designs, the defenses express successive techniques and technologies in fortification construction. The varied examples of military architecture from the 16th to 20th centuries in the fortifications of San Juan are evidence of the imperial struggles that defined the development of the Americas. As one of the first as well as one of the last of the numerous seats of power in Spain’s American empire, these structures are now potent symbols of the cultural ties that link the Hispanic world.

Criterion (vi): La Fortaleza and San Juan National Historic Site outstandingly illustrate the adaptation to the Caribbean context of European developments in military architecture from the 16th to 20th centuries. They represent the continuity of more than four centuries of architectural, engineering, military, and political history.

Located within the boundaries of La Fortaleza and San Juan National Historic Site in Puerto Rico are all the elements necessary to understand and express the Outstanding Universal Value of the property, including La Fortaleza, Castillo San Felipe del Morro, Castillo San Cristóbal, San Juan de la Cruz (El Cañuelo) fort, and a large portion of the original San Juan City Wall, including San Juan Gate. The portion of the City Wall that belongs to the Commonwealth of Puerto Rico is not within the property. The property is nevertheless of sufficient size to adequately ensure a full representation of the features and processes that convey its significance. The property in general does not suffer from adverse effects of development or neglect, though urban encroachment near the north section of the City Wall and the deterioration of the San Juan del la Cruz fort’s facade and Castillo San Cristóbal’s outworks have been identified as concerns. There is no buffer zone for the property.

La Fortaleza and San Juan National Historic Site in Puerto Rico is authentic in terms of its forms and designs, materials and substance, and location and setting. The fortifications remain as a clear testimony to their original defensive purpose, and indeed continued to serve as such through the mid-20th century. The original construction methods, including those used in periodic expansions and improvements during the forts’ active service, are still evident and can be used to guide continuing conservation. Repairs have been constantly necessary over the life of the structures due to their age and the vulnerable materials of which they are composed; regular monitoring now supports repair work.

The site is fundamentally in a good state of preservation, despite conservation challenges posed by susceptible materials such as sandstone, brick, and plaster in the presence of the erosive action of the sea and heavy traffic in the area. Some early repairs using concrete also caused damage, but current professional conservation policies, including regular monitoring, are addressing these issues.

Formal agreements are in place for cooperative management of the property between the Government of Puerto Rico and the National Park Service. Guiding documents include a General Management Plan (1985), a Long-Range Interpretive Plan (2006), an Alternative Transportation Plan, and various interpretive plans for waysides and exhibits for San Juan National Historic Site; the Commonwealth government has committed to compiling current practice into a formal management plan for La Fortaleza. A new visitor center established in 2002 at Castillo San Cristóbal allows for improved public access and there are plans to further enhance information for visitors and reduce traffic.

Sustaining the Outstanding Universal Value of the property over time will require completing, approving, and implementing a general management plan for La Fortaleza; continuing to apply appropriate conservation measures aimed at protecting vulnerable materials, including at the San Juan del la Cruz fort and Castillo San Cristóbal outworks; and managing urban encroachment near the City Wall.