After Christopher Columbus's arrival on the island in 1492, Santo Domingo became the site of the first cathedral, hospital, customs house and university in the Americas. This colonial town, founded in 1498, was laid out on a grid pattern that became the model for almost all town planners in the New World. 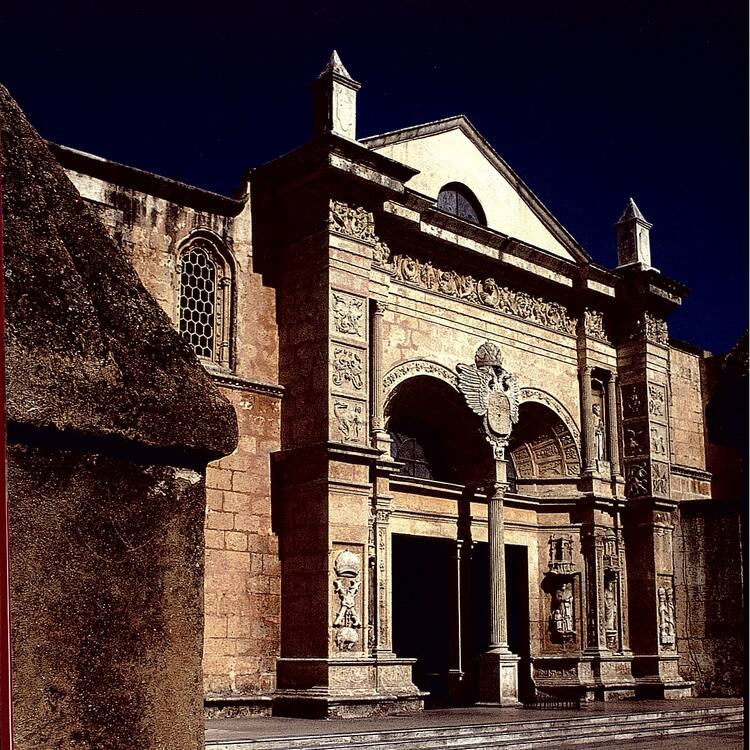 First permanent establishment of the « New World » and capital of the West Indies,the Colonial City of Santo Domingo – the only one of the 15th century in the Americas – was the place of departure for the spread of European culture and the conquest of the continent. From its port conquerors such as Ponce de Leon, Juan de Esquivel, Herman Cortes, Vasco Núñez de Balboa, Alonso de Ojeda and many others departed in search of new lands.

Located at the mouth of the Ozama, on the south coast of Hispaniola Island, the Colonial City of Santo Domingo is the core from which Santo Domingo de Guzman, capital of the Dominican Republic, was founded. Originally established on the east side of the Ozama in 1496, it was founded by Bartholomew Columbus in 1498, by order of the Catholic kings.  In 1502, the Governor Nicolas de Ovando transferred its institutions to the west bank and decided to provide the city with a grid pattern from the Grand Place (Plaza Mayor). This checkerboard layout later became a reference for almost all the town planners of the New World.

City of « firsts »,Santo Domngo was the headquarters for the first institutions in the Americas : Saint Mary of the Incarnation Cathedral, Saint Francois Monastery, Saint Thomas Aquinas University,  Nicholas de Bari Hospital, and the Casa de Contratación.  It is also the first fortified city (fortress of Santo Domingo and its Torre del Homenaje) and the first headquarters of Spanish power in the New World.

Over an area of 106 ha, bordered by walls, bastions and forts, the inscribed site comprises 32 streets that criss-cross the 116 blocks, constructions of one or two levels with stone, brick or earthen walls. Its original plan, the scale of its streets and its buildings are almost totally intact; it is the only living urban centre that retains its characteristics of the 15th century. With its monumental heritage ensemble and its Gothic buildings unique in this region of the continent, the Colonial City of Santo Domingo maintains in essence the structure, use and functions that have characterized the first constructions at the time of its foundation, preserving its integrity and authenticity.

City of encounters, it is here where for the first time native, European and African  cultures crossed and where multicultural understanding was developed in  total synchronization of knowledge, language, belief and experiences. Also, it is the Colonial City of Santo Domingo where the Dominican monk, Brother Antonio Montesino launched his appeal for the natural right of the natives, marking the beginning of the combat for the fundamental rights of mankind.

Criterion (ii): The Colonial City of Santo Domingo has exercised a strong influence on the development of the cities of the Caribbean and the American continent.  Its grid pattern and its Plaza Mayor have served as a model for new cities in the Americas. Its institutional buildings date from the 16th century – Palace of the Viceroy, Cabildo  (Town Hall), Real Audiencia (Royal Court of Justice) Chancery and Cathedral – have served as references for future development.

Criterion (iv): The initial urban fabric of the City of Santo Domingo, the « Ovando model » is conserved intact, as much in the regularity of its grid layout adjusted here and there due to topographical imperatives, as the original width of its streets.  Its monumental buildings that date from the beginning of the 16th century, bear witness to the decline of Spanish Gothic and the appearance of the first indications of the Renaissance, as is eloquently illustrated in its cathedral.

Criterion (vi): Events of universal importance have seen the light of day in Santo Domingo: expeditions and conquests of new lands left from this point; the spread of evangelization and the first Leyes de Indias (Laws of the Indies) were proclaimed and enforced.

The Colonial City of Santo Domingo, surrounded by its walls, has preserved, almost unaltered, the extension of its territory, its grid layout and most of its architectural monumental structures. Apart from rare but dramatic exceptions, it has retained its traditional scale, the width of the streets, the plots and heights of the buildings. Throughout its historical development, it has incorporated architecture of various eras with their forms, styles, materials and construction methods that have enriched the knowledge and interpretation of its economic, social and cultural development as a living historical centre.

It conserves its social fabric, its great symbolic value and, basically, the different uses that characterize the first constructions of its foundation. Despite the pressures caused by property development, damage caused by hurricanes and earthquakes, the essential attributes upon which the functional and physical integrity of the City of Santo Domingo are based, are preserved.

The Colonial City of Santo Domingo has retained intact its original perimeter, conserving most of its walls and forts.  The urban grid plan, the plots and original width of its streets are conserved, for the most part, enabling a credible interpretation of the city.  Its small-scale architectural expression highlights its volumetric homogeneity.

The restoration interventions carried out remain evident.  As far as possible, the consolidation techniques used were made using materials compatible with the original structure.

Some of the structures of the Colonial City have been affected by natural phenomena and action of humankind, without having lessened to a significant degree their intrinsic value and their authenticity.

The protection of the Colonial city of Santo Domingo is ensured thanks to a vast number of nationally enforced laws and decrees, and through municipal standards and provisions that consolidate its overall vision and the preservation of its elements. Article 64 of the Constitution of the Dominican Republic (January 2010) stipulates that historical and artistic properties of the country are part of the cultural heritage of the nation and under the protection of the State.  Under Law 318 (1968), the task to define the necessary regulations for the protection and conservation of this cultural heritage was entrusted to the executive power that, under Decree 1397 (1967), created the Office for Cultural Heritage with the principal responsibility to develop, coordinate and implement the initiatives and national plans concerning  its monumental heritage.  Finally, Notice 03-2011 regulates zoning, land-use and interventions in the Colonial City; it also describes the part of the buffer zone that is located in the National District.

However, from the legal perspective, particular importance must be accorded to the consolidation of mechanisms for the coordination of the different participants involved in surveillance and management mandates.  It is also necessary to provide the principal stakeholders of the Colonial City – Ministry of Culture and Town Hall of the National District – with more competent and a greater number of technical staff to efficiently execute the work.

With regard to management, the responsible institutions have adopted an Integral Revitalization Plan for the Colonial City of Santo Domingo (approved by the Municipality by Notice 08-2011) as an urban and local planning tool, to deal with the challenges of renovating its basic infrastructure and the pressures caused by the real or potential threats associated with natural, social and economic risks (hurricanes, earthquakes, property development pressure and mass tourism, among others). The coordination of management actions in the buffer zone is primordial and is particularly important for the preservation of the universal value of the inscribed property, taking into account the two Municipal jurisdictions concerned. This is a challenge that the Dominican Republic has committed to undertake.

Therefore, it is vital to provide the community – the potential users and investors, the local population and the visitors – with the means of general and specific guidelines to enable them to exercise their rights and obligations to the historic centre.  Finally, the important role of international cooperation must be acknowledged, particularly through its technical and financial cooperation, as a support in the sustainable conservation and revitalization work.