Qinghai Hoh Xil, located in the northeastern extremity of the Qinghai-Tibetan Plateau, is the largest and highest plateau in the world. This extensive area of alpine mountains and steppe systems is situated more than 4,500 m above sea level, where sub-zero average temperatures prevail all year-round. The site’s geographical and climatic conditions have nurtured a unique biodiversity. More than one third of the plant species, and all the herbivorous mammals are endemic to the plateau. The property secures the complete migratory route of the Tibetan antelope, one of the endangered large mammals that are endemic to the plateau. 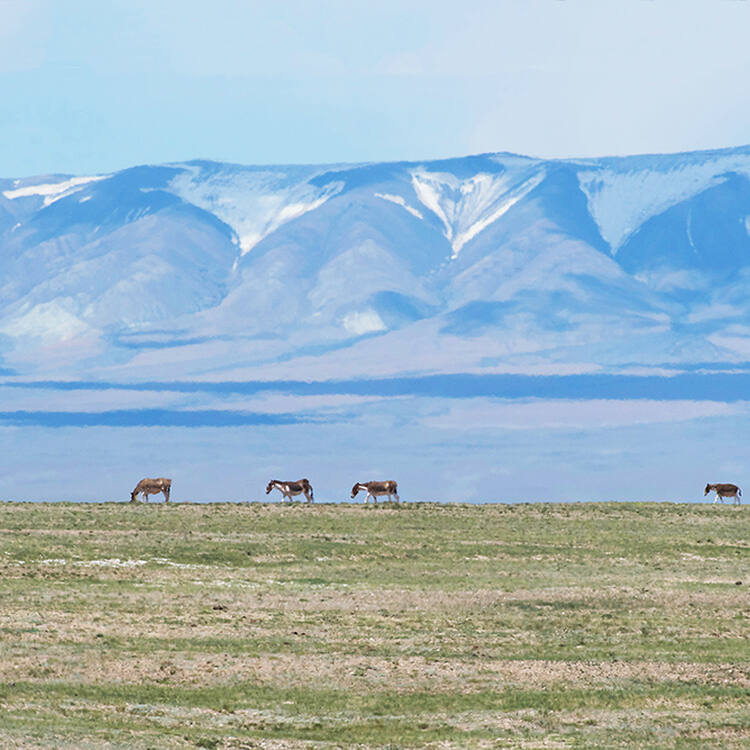 Qinghai Hoh Xil is located in the northeast corner of the vast Qinghai-Tibetan Plateau, the largest, highest and youngest plateau in the world. The property covers 3,735,632 ha with a 2,290,904 ha buffer zone and encompasses an extensive area of alpine mountains and steppe systems at elevations of over 4,500 m above sea level. Sometimes referred to as the world’s “Third Pole”, Hoh Xil has a frigid plateau climate, with sub-zero average year-round temperatures and the lowest temperature occasionally reaching -45°C. With its ongoing processes of geological formation, the property includes a large planation surface and basin on the Qinghai-Tibet Plateau. It is the area with the highest concentration of lakes on the Plateau, exhibiting an exceptional diversity of lake basins and inland lacustrine landscapes at high altitude. With its sweeping vistas and stunning visual impact, this harsh and uninhabited wild landscape seems like a place frozen in time. Yet it is a place that illustrates continually changing geomorphological and ecological systems.

The unique geographical formation and climatic conditions of the property nurture a similarly unique biodiversity. More than one third of the plant species, and all the herbivorous mammals dependent on them are endemic to the plateau, and 60% of the mammal species as a whole are plateau endemics. The frigid alpine grasslands and meadows surrounding Hoh Xil's lake basins are the main calving grounds for populations of Tibetan antelope from across the plateau and support critical migration patterns. The property includes a complete migration route from Sanjiangyuan to Hoh Xii. This route, despite being challenged by crossing the Qinghai-Tibet Highway and Railway, is the best protected among all migration routes of Tibetan antelope known today.

Inaccessibility and the harsh climate have combined to keep the property free from modern human influences and development while at the same time supporting a long-standing traditional grazing regime that coexists with the conservation of nature. Nevertheless, this ''Third Pole" of the world appears to be suffering from the impact of global climate change with disproportionally warming temperatures and changing precipitation patterns. The ecosystems and geographic landscapes are extremely sensitive to such a change and external threats need to be controlled to allow ecosystems to adapt to environmental change.

Criterion (vii): Qinghai Hoh Xil is situated on the Qinghai-Tibetan Plateau, the world's largest, highest, and youngest plateau. The property is a place of extraordinary beauty at a scale that dwarfs the human dimension, and which embraces all the senses. The contrast of scale is a recurring theme in Hoh Xil as high plateau systems function unimpeded on a grand scale, wildlife is vividly juxtaposed against vast treeless backdrops and tiny cushion plants contrast against towering snow covered mountains. In the summer, the tiny cushion plants form a sea of vegetation, which when blooming creates waves of different colours. Around the hot springs at the foot of towering snow covered mountains, the smells of dust, ash and sulphur combine with the sharp cold wind from the glacier. Glacial melt waters create numerous braided rivers which are woven into huge wetland systems forming tens of thousands of lakes of all colours and shapes. The lake basins comprise flat, open terrain incorporating the best preserved planation surface on the Qinghai­Tibet Plateau as well as an unparalleled concentration of lakes. The lakes display a full spectrum of succession stages, forming an important catchment at the source of the Yangtze River and a spectacular landscape. The lake basins also provide the major calving grounds of the Tibetan antelope. In early summer each year, tens of thousands of female Tibetan antelopes migrate for hundreds of kilometres from wintering areas in Changtang in the west, the Altun Mountains in the north and Sanjiangyuan in the east to Hoh Xil’s lake basins to calve. The property secures the complete antelope migratory route between Sanjiangyuan and Hoh Xil, supporting the unimpeded migration of Tibetan antelope, one of the endangered large mammal species endemic to the Plateau.

Criterion (x): High levels of endemism within the flora of the property are associated with high altitudes and cold climate and contribute to similarly high levels of endemism within the fauna. Alpine grasslands make up 45% of the total vegetation in the property dominated by the grass Stipa purpurea. Other vegetation types include alpine meadows and alpine talus. Over one third of the higher plants found in the property are endemic to the Plateau and all of the herbivorous mammals that feed on these plants are also Plateau endemics. There are 74 species of vertebrates in Hoh Xil, including 19 mammals, 48 birds, six fish, and one reptile (Phrynocephalus vliangalii). The property is home to Tibetan antelope, wild yak, Tibetan wild ass, Tibetan gazelle, wolf and brown bear, all of which are frequently seen. Large numbers of wild ungulates depend on the property including almost 40% of the world's Tibetan antelope and up to 50% of the world's wild yak. Hoh Xil conserves the habitats and natural processes of a complete life cycle of the Tibetan antelope, including the phenomenon of congregating females giving birth after a long migration. The calving grounds in Hoh Xil support up to 30,000 animals each year and include almost 80% of the identified birth congregation areas in the entire antelope range. During the winter, some 40,000 Tibetan antelopes remain in the property, accounting for 20-40% of the global population.

Qinghai Hoh Xil covers an extensive area which is virtually free of modern human impact. The extreme climatic conditions coupled with its inaccessibility combine to protect what is the last refuge for many globally significant plateau-dependent species. The design of the property accommodates the distribution ranges of large mammals and it is of a size that has a better than normal chance of buffering ecosystem changes due to global climate change. The property supports a large part of the total extent of the life cycle and migration routes of the Tibetan antelope. Despite the very large size there are opportunities to further extend the property, to encompass additional significant natural areas. There is no buffer zone established to the west and north of the property because the property is adjacent to three existing well protected areas in Qinghai Province, the Tibetan Autonomous Region and in Xinjiang Autonomous Region, but this implies the need for these adjacent areas to remain effectively conserved in view of their direct link to the conservation of the property.

The west section of the property, the Hoh Xii National Nature Reserve, is completely uninhabited and thus remains in a pristine state; the east section, the Soja-Qumar River sub-zone of Sanjiangyuan National Nature Reserve, is also in near pristine state. This area supports the traditional nomadic lifestyles of Tibetan pastoralists who have coexisted with its conservation for a long time, and these communities have demonstrated a strong commitment through various initiatives to participate in conservation efforts. A few self-guided tourists (mostly in summer) along the Qinghai-Tibet highway do not significantly affect the integrity of the property. In addition, with strict enforcement by the authorities, the number of large poaching and illegal mining incidents has been substantially halted.

A notable challenge in the protection of the property is the highway and a railway that connect Qinghai and Tibet, and which pass through the eastern section of the property from the north to the south. Animal migration in this area is facilitated via the construction of corridors and active management of the transport corridor during the migration season. These measures have helped Tibetan antelope and other species adapt to the changes quickly and there is no evidence that the migratory patterns have been adversely disrupted.

Climate change presents a potential threat to the integrity of the property's endemic species and ecosystems. The site’s vastness and marked elevation gradients should contribute substantial resilience to ensure the impact from human activity and invasive species can be well managed, nevertheless records show a notable rise in average temperature in the 60 years prior to inscription on the World Heritage List. As a consequence, the Qinghai­Tibetan Plateau ecosystem is facing significant change for example the melting of permafrost and glaciers, encroachment of alpine shrub into the alpine meadows, and desertification of grassland. In the meantime, numerous new hot springs and faults are being formed following earthquakes. Glacial melting and increased precipitation have flooded one natural lake shore and formed new lakes downstream creating habitats in a state of dynamic flux. These geological and ecological dynamics offer a rare opportunity for scientific observations and long-term research. Warming temperatures may lead to species from lower altitudes moving up into new habitat refugia on the Plateau. Warmer conditions may also trigger greater pressure from human settlements moving into previously inhospitable areas.

All areas within the property are state-owned and are protected areas at the national-level. A management system and a coordination mechanism have been established to ensure human and financial resources by engaging the support of central and local governments, communities, NGOs, and research institutions. Concerted efforts from these stakeholders, plus central and local legal protection, have effectively maintained the natural state of wilderness in the property and have ensured the ongoing survival of its resident species.

The conservation and management of the property will be guided by the Qinghai Hoh Xil Property Management Plan. This plan specifies a vision and objectives to maintain and enhance the Outstanding Universal Value of the property as well as a series of management activities aimed at improving protection. The plan recognizes and actively involves local Tibetan herders living in the property and buffer zone in conservation, management, and educational efforts. The plan addresses a range of issues concerning monitoring, public promotion, sustainable tourism development and, importantly, long term management along the transport corridor that crosses the property and its buffer zones.

The property benefits from an integrated management agency that coordinates efforts from central, provincial, municipal, and local authorities. Sufficient staff with multiple background and relevant experience will be provided to guarantee the conservation and management of the property. It will be of great importance that the responsible national and provincial authorities ensure that any development and changes to the transport corridors are fully assessed prior to implementation to protect the integrity of the property, including the migration routes that cross these transport routes.
News