Convent of Christ in Tomar

Convent of Christ in Tomar

Originally designed as a monument symbolizing the Reconquest, the Convent of the Knights Templar of Tomar (transferred in 1344 to the Knights of the Order of Christ) came to symbolize just the opposite during the Manueline period – the opening up of Portugal to other civilizations. 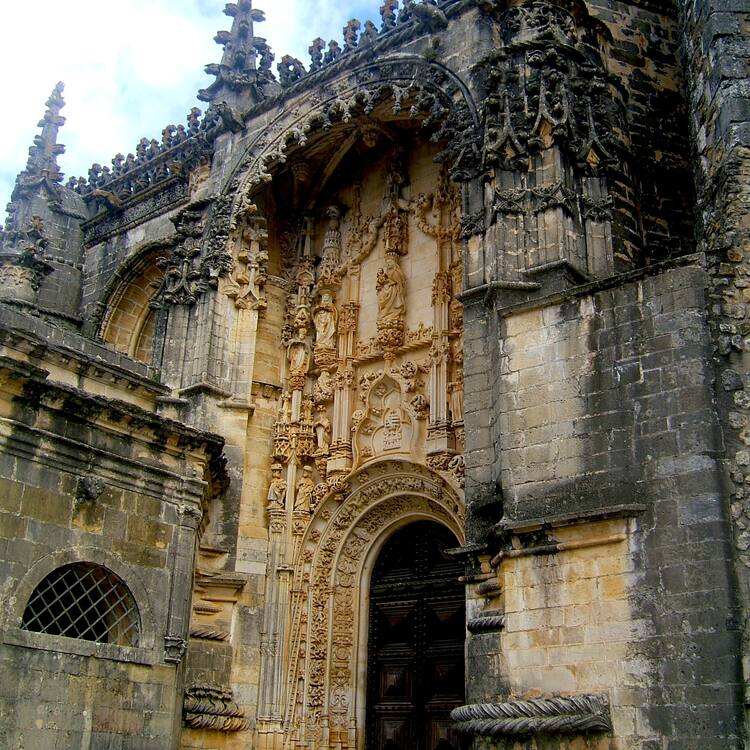 The cityscape of Tomar, located in the Centre of Portugal, is dominated to its west by the vast monumental complex of the Convent of Christ as it stands at the top of a hill. It is a main feature of the city’s identity, the unity of which has been preserved. The Convent is surrounded by the walls of the Castle of Tomar. It belonged to the Order of the Templars and was founded in 1160 by Gualdim Pais, grand master of the Knights Templar.

Built over the span of five centuries, the Convent of Christ is a testimony to an architecture combining Romanesque, Gothic, Manueline, Renaissance, Mannerist and Baroque elements. The Convent’s centrepiece is its 12th century rotunda, Oratory of the Templars, influenced by Jerusalem’s Holy Sepulchre Rotunda. It was built by the first great master of the Templars, Gualdim Pais, and was based on a polygonal ground plan of 16 bays including an octagonal choir with ambulatory: this is one of the typical "rotondas" of Templar architecture of which few examples are still extant in Europe. In 1356, the Convent became the home of the Order of Christ in Portugal and the rotunda’s decoration reflects the Order’s wealth. The paintings and frescos depicting mainly 16th century biblical scenes, as well as the gilt statuary under the Byzantine dome were carefully restored. When the Manueline church was built, it was connected to the rotunda by an arcade.

To the north and east are the Sacristy, the Cemetery and Laundry cloisters, the Infirmary, the Knights hall and the pharmacy. Cloisters were added at different periods: that of the Cemetery, constructed to the north-east of the rotunda ca. 1430 by Infante Don Henrique employed pointed arches of a sober, elegant Gothic style.

Manueline influence was, as elsewhere, decisive and compelling: It was under King Manuel that Diego de Arruda was commissioned to execute the enormous choir based on a square plan with a tribune raised above the chapter-house. The elevation of these two stories is marked on the exterior by two renowned bays, a window and an oculus combining Gothic and Moorish influences, thereby offering the most accomplished expression of Manueline decorative style.

Major changes that took place during the reign of King D. João III (1521-1557) were meant to express the power of the Order with rich Manueline decorations. Other cloisters and new monastic buildings were constructed under João III by João de Castilho who, at Tomar as at Belém, were not insensitive to Italian influence. Work continued in the second half of the 16th century in the cloister of the "Philips", the principal cloister, modified by Diego de Torralva. The facades are set into rhythm by a Serlian or Palladian ordering of two stories of Corinthian and Tuscan columns.

Originally designed as a monument symbolizing the Reconquest, the Convent of the Knights Templar of Tomar (transferred in 1344 to the Knights of the Order of Christ) came to symbolize just the opposite during the Manueline period – the opening up of Portugal to other civilizations.

Criterion (i): The primitive church of the Templars, together with its constructions of the Renaissance, forms a masterpiece of human creative genius.

Criterion (vi): The Convent of Christ in Tomar, originally conceived as a symbolic monument of the Reconquest, became, from the Manueline period, an inverse symbol: that of the opening of Portugal to exterior civilizations.

Within the boundaries of the property are located all the elements necessary to express the Outstanding Universal Value of the Convent of Christ, including architecture and decoration from successive periods.

The Convent preserves its authenticity by maintaining its original plans, materials, social significance and relationship with the urban setting. Restoration projects have strictly respected original materials and techniques. There is a strict intervention plan placing emphasis on the conservation and restoration of the rotunda. The complex has not undergone any major alterations. The Convent is currently a cultural, touristic and devotional attraction. The annual meeting of the Order of the Knights Templar still takes place on the Convent’s premises on the first fortnight of March, and is preceded by a religious ceremony. Furthermore, the Convent is open to the public and the church still holds religious services.

The Convent of Christ was classified as a national monument by a Decree published in the government Journal no. 14 of 17 January 1907.

In order to ensure enforcement of the Law establishing the bases for the policy and system of rules for protection and enhancement of cultural heritage (Law no. 107 of 8 September 2001), Decree no. 140 of 15 June 2009 established the legal framework for studies, projects, reports, works or interventions upon classified cultural assets. It established, as a rule, the need for a previous and systematic assessment, monitoring and weighing of any works that are likely to affect the site’s integrity so as to avoid any disfigurement, dilapidation, loss of physical features or authenticity. This is ensured by appropriate and strict planning, by qualified staff, of any techniques, methodologies and resources to be used for implementation of works on cultural properties.

Similarly, according to Decree no. 309 of 23 October 2009, buffer zones are considered special protection zones, benefitting from adequate restrictions for the protection and enhancement of cultural properties.

To preserve the authenticity and integrity of the whole monumental complex within a work plan involving the local community is the key management goal. It also takes into account UNESCO’s recommendations in the State of Conservation Report from 1990, namely roofing repairs so that there is no water dripping on the façades.

All the interventions that have been implemented or are foreseen, comply with current legislation, as well as with strict technical and scientific criteria. There is a special focus on the treatment and rehabilitation of the area surrounding the monument, as these works will be ensured by local organisations involving both the municipality and the local community.

There is controlled reconversion of some of the areas of the convent for cultural, educational, scientific, and social uses.

Management of this complex is ensured by the decentralized services of the Directorate General for Cultural Heritage (DGPC), the central administration department responsible for cultural heritage. Conservation, enhancement and safeguarding measures are ensured by the DGPC that is responsible for drawing up an annual programme and implementing it so as to secure the future of the monument.