Founded in 1147, the Cistercian Maulbronn Monastery is considered the most complete and best-preserved medieval monastic complex north of the Alps. Surrounded by fortified walls, the main buildings were constructed between the 12th and 16th centuries. The monastery's church, mainly in Transitional Gothic style, had a major influence in the spread of Gothic architecture over much of northern and central Europe. The water-management system at Maulbronn, with its elaborate network of drains, irrigation canals and reservoirs, is of exceptional interest. 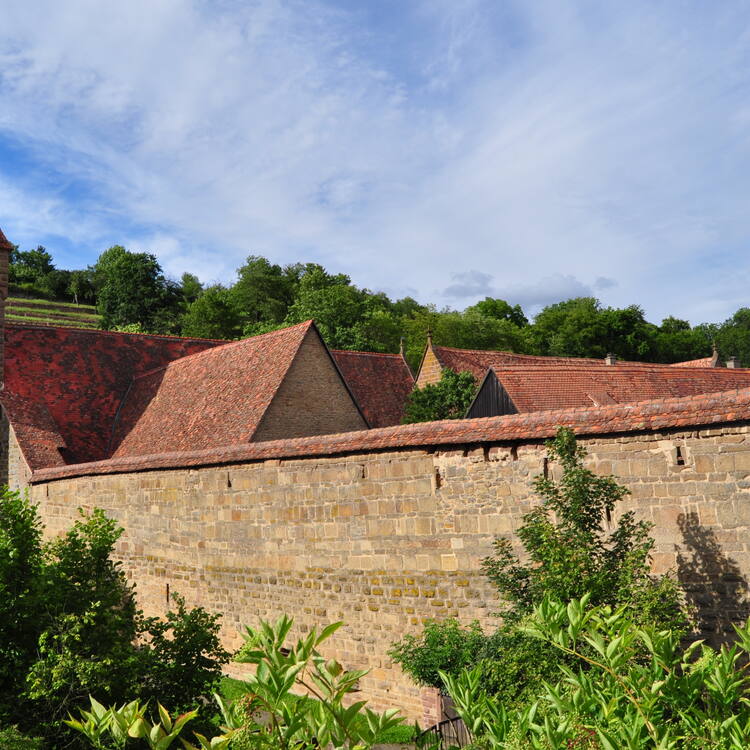 Founded in 1147, the Cistercian Maulbronn Monastery located in southern Germany is considered the most complete and best preserved medieval monastic complex north of the Alps. The property is set within the Salzach river valley with its surrounding hills, and comprises several areal as well as numerous linear component parts, most related to a water-management system.

The architectural ensemble of the monastery reflects developments within the Cistercian order between the 12th and 16th centuries, and also the effect of secularization and conversion to Protestant use. It is clearly defined and separated from the town by its fortified walls and its location on the outskirts of the town. The church is typical of first-generation Cistercian architecture: a two-storey Romanesque nave and a low chevet leading to a transept with three rectangular chapels opening off each arm. The monastery´s church, mainly in transitional Gothic style, had a major influence in the spread of Gothic architecture over much of northern and central Europe. The church is part of a complex of buildings arranged around a cloister. The monastery outbuildings are mostly from the 16th century and later, although they often incorporate substantial remnants from medieval buildings. The property also includes several post-monastic buildings.

The Cistercian Order was notable for its innovations in the field of hydraulic engineering, and this is admirably illustrated in the Maulbronn Monastery Complex. There is an elaborate system of reservoirs, irrigation canals and drains located along the river valley and in the surrounding hills, used to provide water for the community, fish farming and irrigation of extensive agricultural holdings. Despite the changes in the 19th century, with the drainage of several of the reservoirs, and also the expansion of the town of Maulbronn, the water management system is still one of the most extensive and best-preserved Cistercian water systems.

Criterion (ii): The construction of the transitional Romanesque-Gothic church at Maulbronn was of fundamental importance in the dissemination of Gothic architecture over much of northern and central Europe.

Criterion (iv): The Maulbronn Complex is the most complete survival of a Cistercian monastic establishment in Europe, in particular because of the survival of its extensive water-management system of reservoirs, irrigation canals and drains.

The basic medieval layout and structure of the central monastery complex, which is typical of the Cistercian tradition, is virtually complete. There are also extensive preserved remains of the water management system. The property is of adequate size to ensure the complete representation of the attributes and processes which convey its significance.

The buffer zone includes the immediate setting of the property, and other attributes that are functionally important as a support to the property and its protection and contributes to strengthen the property’s integrity.

The topographic features around the monastery have been preserved almost intact, its development from the 12th to the 17th century can be traced, and the whole complex is in an excellent state of conservation. In view of the monastery's long and complex history, its present appearance is an amalgam of many styles and periods. The 19th century secularization and conversion to a Protestant seminary resulted in some fundamental changes to certain buildings. However, the restoration work in the 19th and 20th centuries has been impeccable, and as a result the whole complex has a very high degree of authenticity. The preserved water management system complements the authenticity of the monastic complex.

The laws and regulations of the Federal Republic of Germany and the Federal State of Baden-Württemberg guarantee the consistent protection of Maulbronn Monastery Complex. The property is protected under Sections 28 and 12 of the Monument Protection Act Baden-Württemberg (Gesetz zum Schutz der Kulturdenkmale) as amended as well as the Town and Country Planning Code (Bundesrepublik Deutschland Baugesetzbuch) as amended.

Some 90% of the monastery is in public ownership by the Federal State of Baden-Württemberg and Town of Maulbronn. The owners of private properties (including those within the area of the historic water management system) must seek approval for any work that they wish to carry out. The Stuttgart Regional Commissioner's Office is the steering and legal authority concerning construction planning and regulation as well as the protection of nature and monuments. A Monastery Advisory Committee (Klosterbeirat) was established prior to the inscription on the World Heritage List and this continues to operate. An annual work / action plan including a comprehensive, integrated monitoring system as well as an effective education and awareness programme is in place. Maulbronn Monastery Complex is an integral part of the regional and local tourism policy.  A conceptual landscape document has been developed for the preservation, maintenance, and development of the buffer zone (Landschaftsplanerische Gesamtperspektive Kloster-landschaft Maulbronn 2012).

District of Enz, State of Baden-Württemberg