Located 30 km northwest of Lisbon, the property was conceived by King João V in 1711 as a tangible representation of his conception of the monarchy and the State. This imposing quadrangular building houses the king’s and queen's palaces, the royal chapel, shaped like a Roman baroque basilica, a Franciscan monastery and a library containing 36,000 volumes. The complex is completed by the Cerco garden, with its geometric layout, and the royal hunting park (Tapada). The Royal Mafra Building is one of the most remarkable works undertaken by King João V, which illustrates the power and reach of the Portuguese Empire. João V adopted Roman and Italian baroque architectural and artistic models and commissioned works of art that make Mafra an exceptional example of Italian Baroque. 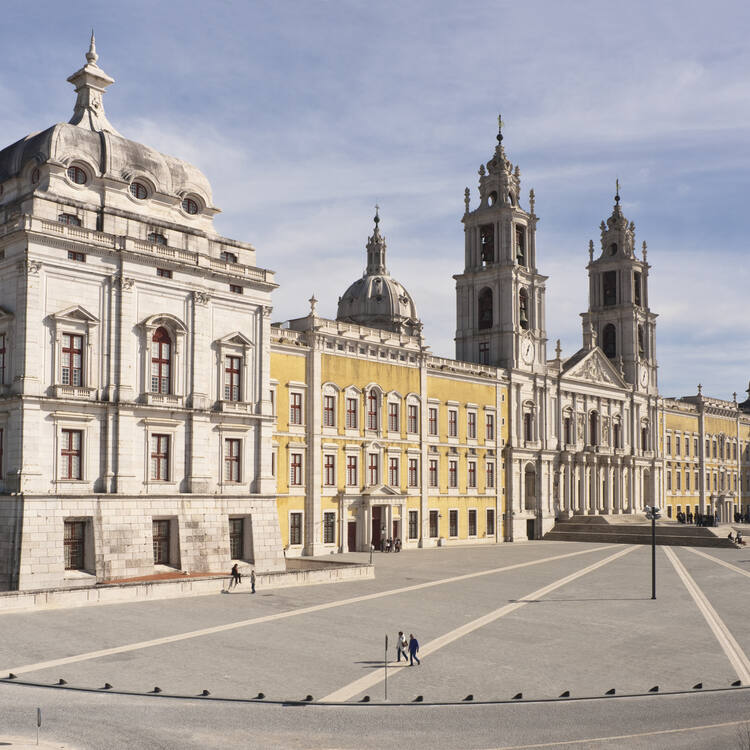 The Royal Building of Mafra consists of a Palace, which integrates a Basilica, with its axial frontispiece uniting the King and the Queen wings, a Convent, the Cerco Garden and a Hunting Park (Tapada).

It represents one of the most magnificent works undertaken by King João V, who had exceptional cultural and economic conditions that allowed him to stand out among other European monarchies as a powerful sovereign of a vast multicontinental empire.

Beginning with the choice of the architect Johann Friedrich Ludwig, a Swabian with training in Rome - this project symbolised an international affirmation of the Portuguese ruling dynasty. The ongoing fascination experienced by the monarch for the Rome of the great popes in the Baroque period led him to commission the work of important artists for Mafra, which ultimately became one of the most relevant sites of Italian Baroque outside Italy.

On the occasion of the consecration of the Basilica, on October 22nd 1730, the King’s birthday, the monument was not yet concluded but the project was well defined and in an advanced stage of implementation: a grandiose building complex integrating seamlessly a royal palace, a basilica and a convent with its library. The Royal Palace endowed with two turrets that, functioning independently, were the private apartments of the royal couple; the church, a Basilica decorated with 58 statues by the best Roman and Florentine artists, and an unprecedented set of French and Italian ecclesiastic vestments; two towers on the facade containing two carillons ordered from Flanders and constituting a unique bell heritage worldwide; a Library containing works of great cultural and scientific interest, and one of the few that was allowed to incorporate “banned books”, a remarkable collection of incunabula and manuscripts, as well as a bibliographic collection with a wide range of publications from the 15th to the 19th centuries. From the mid-eighteenth century the new stone altar pieces of the Basilica were carved, a work of Alessandro Giusti, an Italian artist who founded, in Mafra, a school of sculpture. It was also in Mafra that Joaquim Machado de Castro, the most important Portuguese sculptor of the 18th century, received his training, furthermore, it was on the immense construction site of Mafra that the knowledge and practices were acquired and then applied for the reconstruction of Lisbon after the devastation caused by the 1755 earthquake. Noteworthy are also the six historic organs of the Basilica, ordered to the Portuguese organ masters, António de Machado Cerveira and Peres Fontanes at the end of the 18th century and designed and built to play simultaneously.

The Cerco Garden started out as a convent enclosure at the disposal of the friars and also for the purpose of court. As early as in 1718, King João V ordered the planting of all kinds of existing wild trees in the Empire in well distributed beds and wide paths which favoured the organisation of the area in symmetrical plots, however its current layout results from subsequent adaptations. The garden includes a large central lake into which converge the watercourses of the Tapada and an adjoining well associated with a noria. This also contains the unusual Ball Game Field, built on the orders of the Regular Canons of Saint Augustine, when they occupied the Convent between 1771 and 1792.

The Hunting Park (Tapada) was created in 1747 as a private hunting ground for the monarch, as well as for agriculture and livestock breeding, in order to serve the needs of the Palace and the Convent. In late 19th century and in the beginning of the following century, the Hunting Park was the privileged stage for the hunting parties of King Carlos I, who went as far as to build a pavilion, within the approximately 1,200 hectares that make up this property.

Altogether, the Royal Building of Mafra with the Cerco Garden and the Tapada offer a rare and almost complete example of baroque estate comprising a multifunctional palace, a formal garden and a Tapada, which have been elsewhere lost.

Criterion (iv): The Royal Building of Mafra reflects the materialization of absolute power from the time of the King João V, as well as a strategy for consolidation of the Portuguese empire and national sovereignty, affirmation of the dynastic legitimacy, a closer proximity to the international sources of authority, namely of the Papacy of Rome, as well as distancing from the Spanish Crown. The international dimension of the Portuguese empire and the grandeur of its sovereign are at the origin of the gigantism of this construction and the aesthetic options taken, directly inspired by some of the best examples of Baroque architecture in the city of Rome. Other features in this Monument contribute to making this royal residential complex one of the most important in Europe, considering not only its size and constructive accuracy, but also some integrated pieces such as the Carillons and the Organs of the Basilica, musical sets of exceptional relevance in the world. The Hunting Park (Tapada) is an example of large-scale landscape creation forming a territorial unit management umbilically connected with the Palace and the Convent.

The Royal Building of Mafra has preserved most of its historical, architectural and artistic characteristics and includes all attributes justifying its Outstanding Universal Value. The works carried out throughout the centuries have preserved the building, its proportions and volumes, extending its life without changing its physiognomy and functions, as well as the Tapada in its initial extension; on the other hand, only part of the Cerco Garden reflects its original layout, having been modified and reduced to enlarge the Palace. However, altogether, the complex has survived almost intact and continues to illustrate the ideological values and aesthetic principles of the first half of the 18th century. Noteworthy are the consistency of design, rhythm, symmetry, aesthetic quality and harmony, the dignity of the work, the impeccable quality of the project details and implementation, the constructive competence, the good distribution of resources, the prudent administration of construction and the efficient creation of spaces according to the needs. Threats to the property are mainly related to the severe thermal amplitudes and the saline winds of the Atlantic coast, as well as the danger of forest fires in the summer. Improvements in the grounds immediately adjacent to the Palace would strengthen the integrity of property.

During its almost 300 years of existence, the Royal Building of Mafra did not register any significant alterations that compromised its authenticity, namely, as regards its design, form and materials used, only registering small reversible changes. From the point of view of restoration and preservation, the restoration of the six Organs of the Basilica, the Throne Room, and the Carillons (in the programming phase) can be highlighted. Despite the political, economic and social transformations that took place between the 18th century and the present day, the Royal Building adjusted itself to several different functions without, however, losing its basic characteristics. Although it ceased to be a state residence as a consequence of the Implantation of the Republic in 1910, it gained a museum status and public fruition; due to the extinction of religious orders in 1834, the Convent began to host military institutions to this day. The Basilica ceased to be a royal chapel, housing the parish's headquarters in 1836; and the Library preserves its mission to support study and research. Further documentation and cartographic inventory of the Tapada landscape and historic features would contribute to strengthen the overall authenticity of the Complex and the understanding of its historic development.

The main law guaranteeing legal protection to the Royal Building of Mafra is Law n. 107/2001, establishing the foundations for the policies and the system of norms of protection and enhancement of cultural heritage. In order to ensure the application of this law, Decree no. 140, of June 15th 2009, established the legal framework for studies, projects, reports, works or interventions on classified properties, stipulating the need for prior and systematic evaluation and monitoring of any works susceptible of impacting on their integrity, so as to avoid any disfiguration, dilapidation, loss of features or authenticity, which can be ensured by appropriate and thorough planning by duly qualified persons. Furthermore, there is a policy of responsible management that focuses upon environmental solutions and on maintaining a constructive and open dialogue with partners and, among others, with the council to mitigate potential negative impacts from undue usage of areas surrounding the monument, as duly stipulated by Decree no. 309, of October 23rd 2009, which establishes the restrictions appropriate to protecting and enhancing the areas around such cultural assets.

The General Directorate for Cultural Heritage was established by Law Decree n. 115/2012: its mission is to oversee the implementation of the protection and guarantee the management, safeguarding, conservation and restoration of protected cultural properties in Portugal.

The National Palace of Mafra, as a museum, is also subject to the provisions of the Museum Framework Law n. 47/2004 and enjoys a Safety Plan, a compulsory instrument according to the law.

The Tapada is subject also to the provisions of Law Decree n. 151-B/2013 and subsequent modification, Environmental Impact Assessment, and Forest management plan approved in 2014.

A cooperation protocol was signed in 2019 and a cooperation unit was established among the key responsible entities: the General Directorate for Cultural Heritage, the School of Arms, the National Tapada of Mafra, the Municipality of Mafra and the Parish of Santo André in Mafra. A robust management structure, based on strong coordination, a unified approach and clear commitments are necessary to guarantee the long-term sustenance of the Outstanding Universal Value of the property and its full enjoyment.