Used by the kings of France from the 12th century, the medieval royal hunting lodge of Fontainebleau, standing at the heart of a vast forest in the Ile-de-France, was transformed, enlarged and embellished in the 16th century by François I, who wanted to make a 'New Rome' of it. Surrounded by an immense park, the Italianate palace combines Renaissance and French artistic traditions. 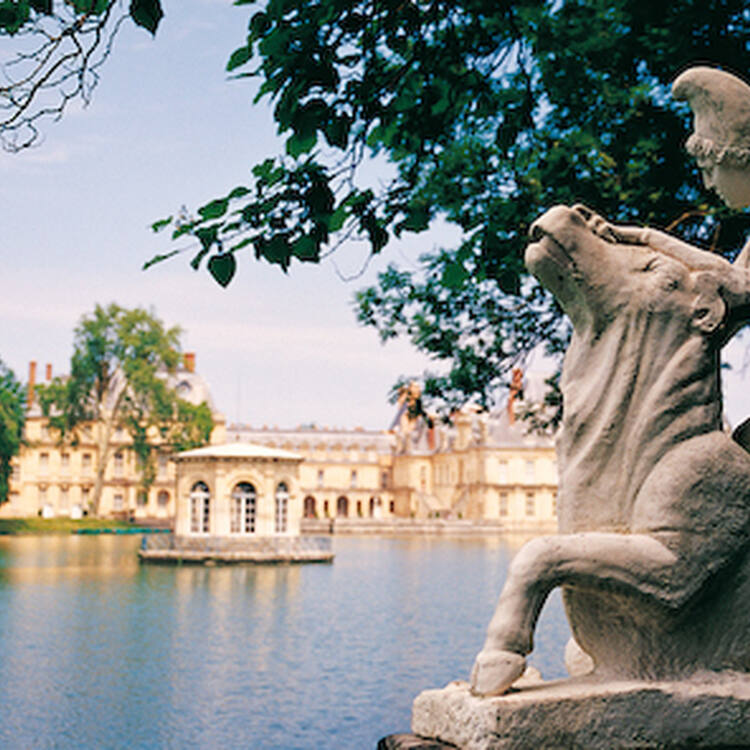 Used by the kings of France from the 12th century, the hunting lodge of Fontainebleau, standing in the heart of the vast forest of the Ile-de-France in the Seine-et-Marne region, was transformed, enlarged and embellished in the 16th century by King François I, who wanted to make it a “new Rome”. Surrounded by an immense park, the palace, to which notable Italian artists contributed, combines Renaissance and French artistic traditions. The need to expand and decorate this immense palace created the conditions for the survival of a true artistic centre.

The construction of the palace began in 1528. The modifications undertaken later by François I’s successors and carried out on different scales until the 19th century have left their imprint on the physionomy of the present complex, which today comprises five courtyards placed in an irregular manner and surrounded by an ensemble of buildings and gardens.

The first building was constructed between 1528 and 1540 under the direction of Gilles Le Breton, the architect of the Oval Courtyard in the eastern wing of the palace. From 1533 to 1540, Rosso Fiorentino worked on the painted decor and the stucco in the François I gallery, achieving an ambitious iconographic programme where themes illustrating monarchy through Greco-Roman fables and myths. Francesco Primaticcio casted the most famous bronzes of antique Rome for decoration. He consecrated the most productive phase of his career to Fontainebleau, where he worked on the frescoes of the Salle de Bal, the room of the Duchesse d’Etampes and the Galerie d’Ulysse. Very few of the rooms that he decorated have survived, but his creations are remembered thanks to drawings and engravings that considerably influenced his time. Nicolo dell’Abbate collaborated with him.

Fontainebleau is associated with other artists: a Hercules of Michelangelo was raised on a plinth in the Cour de la Fontaine; Benvenuto Cellini created his Nymphe of Fontainebleau for the Porte Dorée; Serlio drew up the plans for the different parts of the palace and conceived the entrance to the Fontaine Belle-Eau with its rustic grotto and telamons.

Through this contact with the Italian architects, painters and sculptors, French artists were influenced to transform their own practices. Although Gilles Le Breton appears to have escaped their influence at the beginning, Fontainebleau was a revelation for Philibert de l’Orme, and then for Androuet de Cerceau. The lesson of the Italian painters inspired yet another generation of artists, those of the second school of Fontainebleau, with Toussaint Dubreuilh, Ambroise Dubois and Martin Fréminet. The need to enlarge and decorate this immense palace created the ideal conditions for the existence of an active artistic milieu during the 17th century. The Italian artists called upon by the king, painters, sculptors and architects, decisively and lastingly oriented French Renaissance art, to which they have given their most prestigious and precious examples.

The gardens of Fontainebleau have also undergone important transformations over the centuries. To the east, the Grand Jardin, originally comprising a series of square flowerbeds separated by a canal, were redesigned by Le Nôtre and simplified little by little before adopting its present design, with its four flowerbeds and lawn bordered by flowers.

The Palace of Fontainebleau, a royal residence of the French sovereigns until the 19th century, was constantly maintained and enriched with artistic additions and is also associated with important historical events that occurred there, such as the repeal of the Edict of Nantes, in 1685, and the abdication of Napoleon I in 1814.

Criterion (ii) : The architecture and decor of the Palace of Fontainebleau strongly influenced the evolution of art in France and Europe. The Italian artists called upon by the king, painters, sculptors and architects, decisively and lastingly oriented French Renaissance art, to which they gave its most prestigious and precious examples.

Criterion (vi) : The Palace and the Park of Fontainebleau, a major royal residence for four centuries, are associated with events in French history of exceptional universal importance such as the repeal of the Edict of Nantes by Louis XIV in 1685 and the abdication of the Emperor Napoleon I in 1814.

Until the 19th century, the Palace and the Park of Fontainebleau was the residence of the French sovereigns, who constantly maintained and enriched the palace with artistic additions.

Fontainebleau has conserved the mark of each reign and each style: François I, Henri IV, Louis XIII, Louis XV and Louis XVI, sovereigns who devoted their efforts to embellish this royal palace, which Napoleon I preferred above all others.

Constantly maintained and occupied as a royal or imperial residence until the end of the Second Empire, the Palace of Fontainebleau has known numerous modifications and modernisations over the centuries that have not altered its authenticity. In the 20th century, numerous interventions were undertaken to open up or restore the most significant parts of the palace Renaissance and their decor.

State-owned, the property of the Palace and Park of Fontainebleau is fully protected under the Heritage Code. Listed as a Historic Monument, it generates a perimeter of 500 m. A buffer zone project is under preparation.

Its management, conservation and enhancement is ensured by a public establishment, placed under the responsibility of the Ministry of Culture and Communication. A master plan, approved by the Ministry of Culture and Communication in 2014, is implemented for the period 2015-2026. Notably, it foresees a programme for conservation, restoration and reconstruction, a renovation of the gardens, the park and hydraulic works, an improvement of visitor services and work conditions for staff, as well as security for people and property.