The List Punic Town of Kerkuane and its Necropolis
Print

Punic Town of Kerkuane and its Necropolis

Punic Town of Kerkuane and its Necropolis

This Phoenician city was probably abandoned during the First Punic War (c. 250 B.C.) and as a result was not rebuilt by the Romans. The remains constitute the only example of a Phoenicio-Punic city to have survived. The houses were built to a standard plan in accordance with a sophisticated notion of town planning. 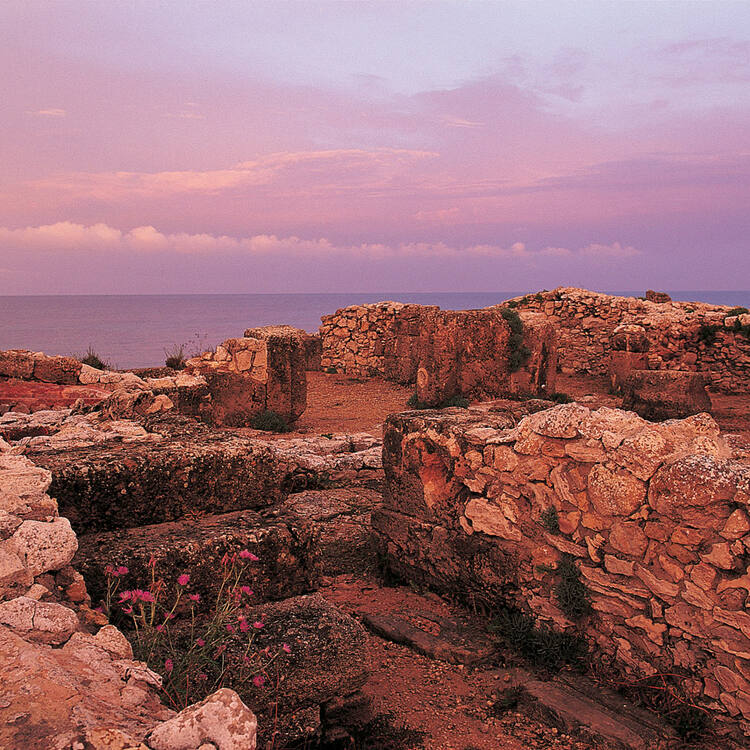 Punic Town of Kerkuane and its Necropolis (Tunisia) © Editions Gelbart

The Punic Town of Kerkuane, located at the tip of Cape Bon on a cliff that dominates the sea, bears exceptional witness to Phoenician-Punic town planning.  Contrary to what took place in Carthage, Tyre or Byblos, no Roman city was built on this Phoenician city, and its port, ramparts, residential districts, shops, workshops, streets, squares, temples and necropolis clearly remain as they were in the 3rd century BC.  The site of the Punic Town of Kerkuane was discovered in 1952. Excavations were carried out by the National Institute of Archaeology and Art.  The earliest known testimonies at the site would date back to the 6th century BC ; whereas the ruins, today visible at the site, date back to the end of the 4th, first half of the 3rd century BC and bear witness to sophisticated town planning.

The Necropolis of Arg el Ghazouani, located on a rocky hill less than one kilometer from the town, bears invaluable witness to Punic funerary architecture of this period; it concerns the most well preserved portion of the great necropolis of Kerkuane, the tombs of which are scattered throughout the coastal hills at the tip of Cap Bon.

Criterion (iii): The Punic Town of Kerkuane, never reinhabited since it was abandoned towards the middle of the 3rd century BC, bears exceptional witness to Phoenician-Punic town planning.  This is the unique known Punic city in the Mediterranean harbouring a mine of information on town planning (development of space respecting a pre-established general plan: wide and fairly straight streets form a checkerboard network, the squares of which are filled with the insulae) and architecture (defence, domestic, religious, artisanal structures, construction techniques and materials). Based on the data discovered, the archaeologist is able to trace the profile of a Punic city as it was between the 6th and the middle of the 3rd century BC.  The discovery of Kerkuane contributes considerably towards improved knowledge of Phoenician-Punic sites in the Mediterranean.

The Punic Town of Kerkuane has preserved all its architectural and town planning components, which are located at the boundary of the property. Following its destruction by Regulus around 255 BC, the town was abandoned and, contrary to other Punic cities which after the fall of the Carthaginian metropolis, were Romanised and lost their Punic features, Kerkuane was never reinhabited.  The integrity is threatened by sea erosion.  The presence of a modern supporting wall on the cliff side aims at slowing down erosion of the site and preserving its integrity.  As concerns the Necropolis of Arg el Ghazouani, the boundaries of this sector contain the most well preserved part of the great necropolis of Kerkuane.

The « punicity » of Kerkuane is perfectly reflected in the architecture, town planning, life style (it appears to have been largely city-dwellers), the socio-economic life (diversity and wealth of economic activity), as well as some religious and funerary practices.  The functional relationship of the two portions of the property, the city and its necropolis, must also be perceived in visual terms.

The property is protected by the Law 35-1994 concerning the protection of the archaeological and historical heritage as well as the traditional arts. The property, State-owned, is managed by the National Heritage Institute (INP) which is responsible for the application of the Heritage Code.  The enhancement of the site is the responsibility of the Agency for Heritage Presentation.  A team attached to the INP is responsible for its safeguard and daily management.  A supporting wall has been built against the cliff to counter the negative effect of undertow on the vestiges.  The necropolis is enclosed and a permanent guard is maintained.  Archaeological excavations as well as safeguarding (restoration) of the monuments are planned.  A buffer zone which shall be submitted for control by the INP is being studied.  Its boundary should enable the integration of the two elements of the inscribed property and the administrative and regulatory measures for its management should be defined.