Shared between Mongolia and the Russian Federation, this site is an outstanding example of the Daurian Steppe eco-region, which extends from eastern Mongolia into Russian Siberia and northeastern China. Cyclical climate changes, with distinct dry and wet periods lead to a wide diversity of species and ecosystems of global significance. The different types of steppe ecosystems represented, such as grassland and forest, as well as lakes and wetlands serve as habitats for rare species of fauna, such as the White-naped crane, Great Bustard, Relict Gull and Swan goose, as well as millions of vulnerable, endangered or threatened migratory birds. It is also a critical site on the transboundary migration path for the Mongolian gazelle. 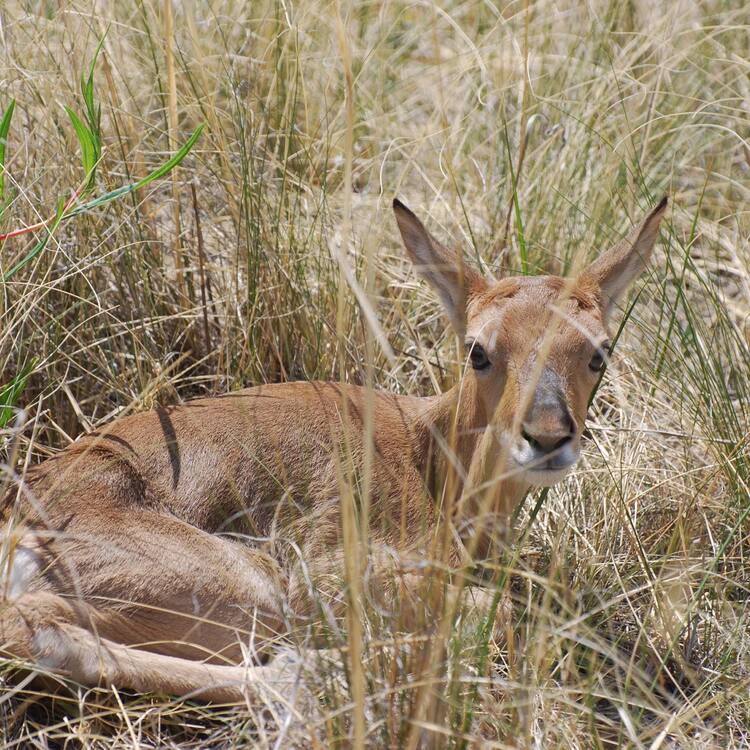 Landscapes of Dauria: A newborn Mongolian Gazelle in the Daursky reserve © V.Kirilyuk

Shared by Mongolia and the Russian Federation, the Landscapes of Dauria is a transboundary serial World Heritage property of four component parts. It is an outstanding example of the Daurian steppe ecosystem, which covers over 1 million square kilometers, extending from Eastern Mongolia to Russian Siberia and into North-Eastern China. The serial property covers a total of 912,624 ha and comprises several protected areas in the northern part of the Daurian steppe ecoregion which occupy large areas of the transition from taiga to desert, including various steppe ecosystems. The inscribed property includes the nationally designated core and buffer zones of most of the Daursky State Nature Biosphere Reserve and the Valley of Dzeren Federal Nature Refuge (Russian Federation), as well as the core zone and a large part of the buffer zone of the Mongol Daguur Strictly Protected Area and the Ugtam Nature Refuge (Mongolia). Most of this property is surrounded by a World Heritage buffer zone of 307,317 ha, which overlaps with Ramsar sites and UNESCO Biosphere Reserves in both countries (Mongol Daguur in Mongolia and Torrey Lakes in the Russian Federation).

The main natural value of the property resides in its intact steppe systems (including forest steppe), interspersed with wet meadows and floodplains, at the convergence of three floristic provinces belonging to three floristic regions. This exceptional ecological context results in a diverse combination of ecological complexes which derive from the cyclic climatic and hydrological variations over the year. The property provides key habitats for rare fauna species such as White-naped Crane, Great Bustard and millions of migratory birds of other species, including vulnerable, endangered or threatened species. The property is also an important area of the migration routes of the Mongolian Gazelle (Dzeren) and the major known place where this species breeds in the Russian Federation at the present time. The property also provides sanctuary to endangered Mongolian Marmots (Tarbagan), as well as to the near-threatened Pallas Cat.

The property provides key habitats for rare fauna species such as the White-naped Crane, the Great Bustard and millions of other vulnerable, endangered or threatened species of migratory birds. The property is also an important area on the migration route of the Mongolian Gazelle (Dzeren) and the only place where this species is known to breed in the Russian Federation. The property also provides sanctuary to both endangered Tabargan and Mongolian Marmots, as well as to the near-threatened Pallas Cat.

Criterion (ix): The Landscapes of Dauria contains substantial and relatively undisturbed areas of different types of steppe, ranging from grassland to forest, as well as many lakes and wetlands. All these habitats host a diversity of species and communities characteristic of the northern part of the vast Daurian Steppe ecoregion. Cyclic climate changes with distinct wet and dry periods lead to high species and ecosystem diversity which is globally significant and offers outstanding examples of ongoing ecological and evolutionary processes. The property also includes key natural habitats for many animal species during their annual migration, some of which also breed in the area. The high diversity of ecosystems, biotopes and their transition-zones in the property is indicative of the many evolutionary adaptive processes undergone by species living in this unique area.

Criterion (x): The transboundary serial property conserves an excellent example of Daurian steppe and its characteristic wildlife including a number of globally threatened bird species (White-naped Crane, Hooded Crane, Swan Goose, Relict Gull, Great Bustard and Saker Falcon) as well as the endangered Tarbagan Marmot. It also provides essential breeding and resting habitat for birds along the East Asian-Australasian Flyway, with up to 3 million birds in spring and 6 million in autumn using the area during migration. The property also provides critical winter grounds and seasonal transboundary migration routes of the emblematic Mongolian Gazelle.

The property contains grassland and forest steppe landscapes which have suffered little from human disturbance. It includes intact breeding and resting grounds for migratory bird species of international importance as well as significant parts of Mongolian Gazelle migration routes. The selection of component parts provides an appropriate representation of the scope of biodiversity of the Daurian Steppe, although there is potential to further extend the series to include other significant protected areas. The property is in a good condition thanks to its size, low human pressure and the absence of impacting uses and activities, such as mining. While grazing, as well as poaching and fire to some extent, could potentially affect the integrity of the property, current practice at the time of inscription is consistent with the property’s Outstanding Universal Value. The States Parties should, however, strengthen their action and cooperation in the future, in order to maintain the long term integrity of the property and minimize threats.

The property is under the highest level of protection afforded by the national laws of both countries, on Special Protected Areas (1994) and on Buffer Zones (1998) in the case of Mongolia, and on Special Protected Areas (1995) in the Russian Federation. The legal status of all types of protected area making up the property provides, in principle, an appropriate conservation regime of this unique ecosystem complex.

The property is also a good example of transboundary ecosystem cooperation, shared between governmental, scientific and non-governmental institutions. It has, since 1994, operated under the framework of the China-Mongolia-Russian International Protected Area Agreement (DIPA). This agreement provides a forum for the States Parties to discuss, on a regular basis, all issues in relation to the preservation of the property and its management, at both political and operational levels.

Regarding hunting and poaching which may potentially impact the Outstanding Universal Value of the property, the States Parties have committed to set up additional “zones of peace” and to reduce the hunting season in the surroundings of the property. They also regularly adopt joint working plans in order to minimize fire and poaching risks and have increased their capacities with external support from international NGOs and foreign countries. Both countries develop joint monitoring activities for Mongolian Gazelle and migratory birds, through the DIPA process, to improve their knowledge and optimize the management of natural resources which are key attributes of the property’s Outstanding Universal Value. There is a commitment to full protection of the property from possible threats from mining and other extractive industries which will be important to maintain into the future. The law in Mongolia does not prohibit mining in the protective zones of Special Protected Areas, however, the State Party of Mongolia has committed to ban mining inside the World Heritage property on the basis of the primacy of international agreements and designations.

Whilst protection and management measures are seen as meeting World Heritage requirements at the time of inscription, it is critical that both States Parties continue and strengthen their efforts in the long-term, in order to prevent impact on the property from significant threats such as changes to hydrology, climate change, illegal hunting, grazing pressure and fire damage. They should also develop coordinated management plans at the property level, with special emphasis on the buffer zones, focused on addressing the main risks to the Outstanding Universal Value of the property.