The List Historic Centres of Stralsund and Wismar
Print

Historic Centres of Stralsund and Wismar

Historic Centres of Stralsund and Wismar

The medieval towns of Wismar and Stralsund, on the Baltic coast of northern Germany, were major trading centres of the Hanseatic League in the 14th and 15th centuries. In the 17th and 18th centuries they became Swedish administrative and defensive centres for the German territories. They contributed to the development of the characteristic building types and techniques of Brick Gothic in the Baltic region, as exemplified in several important brick cathedrals, the Town Hall of Stralsund, and the series of houses for residential, commercial and crafts use, representing its evolution over several centuries. 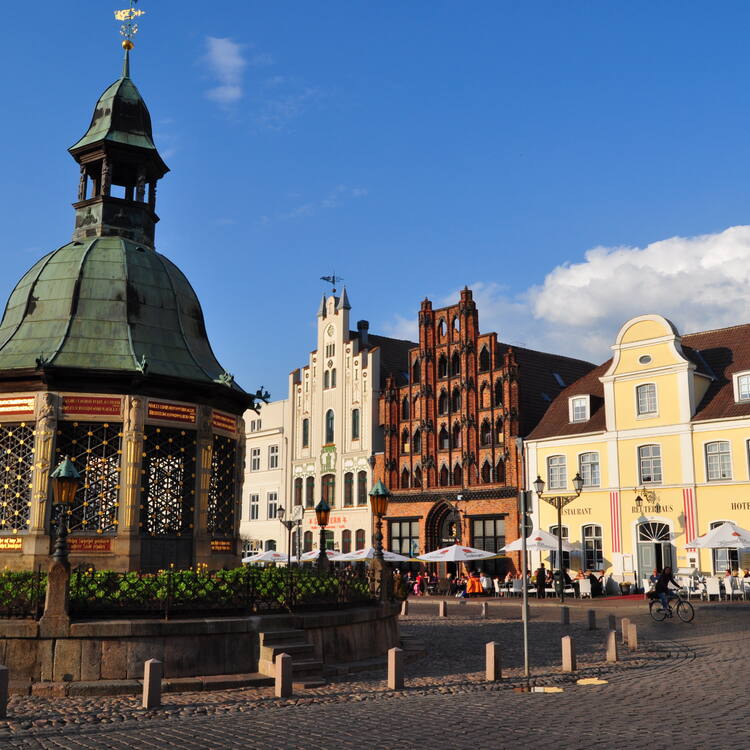 Founded in the 13th century, the medieval towns of Wismar and Stralsund, on the Baltic coast of northern Germany, represent different but complementary trading structures as leading centers of the Wendish section of the Hanseatic League from the 13th to the 15th centuries. In the 17th and the 18th centuries the towns became major administrative and defense centers within the Swedish kingdom, contributing to the development of military art and integrating another layer of cultural influences.

The towns contributed to the development of the characteristic building types and techniques of the Brick Gothic in the Baltic region, using fired brick. On the main elevations the bricks could be moulded in different decorative forms, thus permitting some very elaborate architecture. This is exemplified in several churches, the Town Hall of Stralsund, and in the series of houses for residential, commercial, and craft use, representing an evolution over several centuries. The typology of houses, such as the Dielenhaus and the Kemläden, were developed in the 14th century and became a characteristic feature of many Hanseatic towns.

Wismar has preserved its medieval harbour basin, whereas the island location of Stralsund has remained unchanged since the 13th century. To this day the unmistakable silhouette of Stralsund is characterized by the outstanding buildings of Brick Gothic architecture.

Criterion (ii): Wismar and Stralsund, leading centers of the Wendish section of the Hanseatic League from the 13th to 15th centuries and major administrative and defense centers in the Swedish kingdom in the 17th and 18th centuries, contributed to the development and diffusion of brick construction techniques and building types, characteristic features of Hanseatic towns in the Baltic region, as well as the development of defense systems in the Swedish period.

Criterion (iv): Stralsund and Wismar have crucial importance in the development of the building techniques and urban form that became typical of the Hanseatic trading towns, well documented in the major parish churches, the town hall of Stralsund, and the commercial building types, such as the Dielenhaus.

Owing to the cities’ position, the important views of both towns have been well maintained and the boundary of the medieval town can still be traced well in both cases. Modern construction and industrial buildings have been located in the suburban areas, outside the historic towns. It is thus possible to appreciate the silhouette of the historic townscapes without major changes. The area is however susceptible to visual disruption by new development. The damage suffered in World War II was relatively minor, and a large amount of original architectural substance from the Middle Ages and subsequent periods has survived. All features and structures to convey the components’ significance as leading centres of the Hanseatic league are preserved.

The towns contain a large number of authentic historic structures representing the evolution from the Hanseatic period to the Swedish era. As centers, which were continuously inhabited and always the heart of urban life, whose harbour remained intact and of importance for the economy in all epochs, both cities have continuously preserved their use and can therefore be described as authentic with regard to their function. Today’s high standards with regard to the preservation of monuments have been applied, whereby highest priority is attributed to the preservation of the authentic material.

The old towns are protected in their entirety as areas of historical value in the context of the laws on the protection of historical buildings and monuments of the federal Land of Mecklenburg-Vorpommern, which require that all building measures are subject to approval.

Additional protection is ensured by the respective regulations on areas of historical value and the preservation, design and redevelopment statutes adopted by both towns to secure integrity and authenticity. The components of the World Heritage property are surrounded by designated buffer zones.

Both cities have established local coordinators for the site management.