The eight towns in south-eastern Sicily: Caltagirone, Militello Val di Catania, Catania, Modica, Noto, Palazzolo, Ragusa and Scicli, were all rebuilt after 1693 on or beside towns existing at the time of the earthquake which took place in that year. They represent a considerable collective undertaking, successfully carried out at a high level of architectural and artistic achievement. Keeping within the late Baroque style of the day, they also depict distinctive innovations in town planning and urban building. 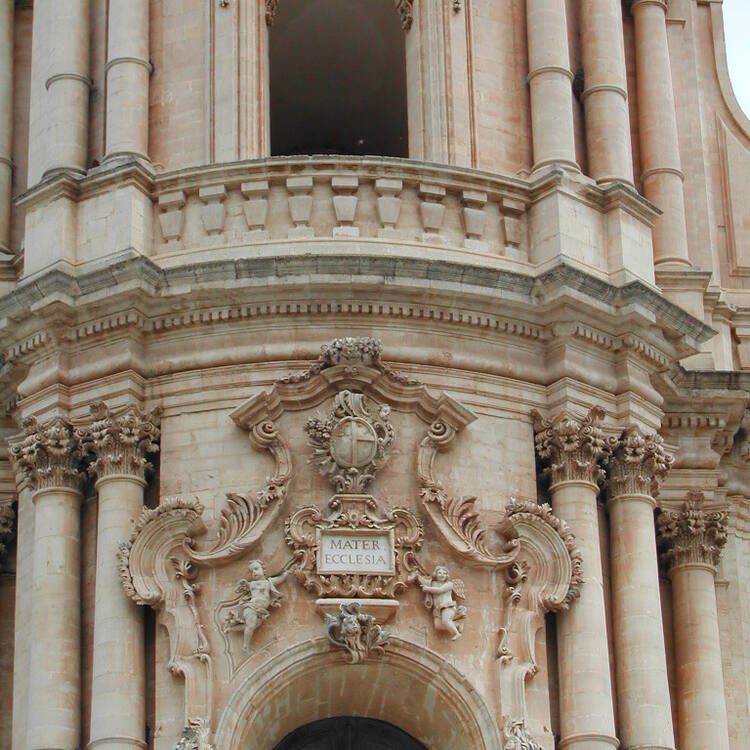 The Late Baroque Towns of the Val di Noto is comprised of components of eight towns located in south-eastern Sicily (Caltagirone, Militello Val di Catania, Catania, Modica, Noto, Palazzolo Acreide, Ragusa andScicli). These historic centres and urban environments reflect the great, post-seismic rebuilding achievement of the decades following the catastrophic earthquake of 1693, which ravaged towns across south-eastern Sicily. The rebuilding, restoration and reconstruction of these communities resulted in the creation of an exceptional group of towns, all reflecting the late Baroque architecture of the 17th century in all its forms and applications.

The eight components of the property differ in size and represent a range of responses to the rebuilding needs. They include the entire old town of Caltagirone, Noto and Ragusa; specific urban areas of Catania and Scicli; and isolated monuments in the historic town centres of Modica, Palazzolo Acreide and Militello Val di Catania. Catania was rebuilt on the site of the original town while others, such as Noto, were rebuilt on new sites. At Ragusa and Palazzolo Acreide, new urban centres were created next to the ancient ones. The centres of Scicli and Modica were moved and rebuilt in adjoining areas already partially urbanized, and Caltagirone was simply repaired.

The towns exhibit a plethora of late Baroque art and architecture of high quality and of a remarkable homogeneity as a result of the circumstances of time, place, and social context in which they were created. However, they also display distinctive innovations in the town planning and urban rebuilding. The property also represents a considerable collective undertaking in response to a catastrophic seismic event.

Criterion (i): The Late Baroque Towns of the Val di Noto in south-eastern Sicily provide outstanding testimony to the exuberant genius of late Baroque art and architecture.

Criterion (ii): The Late Baroque towns of the Val di Noto represent the culmination and final flowering of Baroque art in Europe.

Criterion (iv): The exceptional quality of the late Baroque art and architecture in the Val di Noto lies in its geographical and chronological homogeneity, and is the result of the 1693 earthquake in this region.

Criterion (v): The eight Late Baroque Towns of the Val di Noto in south-eastern Sicily are characteristic of the settlement pattern and urban form of this region, are permanently at risk from earthquakes and eruptions of Mount Etna.

The property includes all the attributes required to express its Outstanding Universal Value, as it encompasses the most representative centres of the late Baroque period in the Val di Noto. The eight components of the property reflect the range of architectural and town-planning developments resulting from the post-seismic reconstruction in the Val di Noto after the 1693 earthquake. This earthquake created an opportunity for an enormous artistic, architectural, and anti-seismic renewal of the cities. The centres retain their residential function, along with a lively society of inhabitants.

The eight components of the property continue to demonstrate with remarkable homogeneity the late Baroque art and architectural style of south-eastern Sicily in individual buildings and town planning. In particular, the almost completely preserved town plans, which have seen only few alterations, express a variety of reactions to the destruction caused by the earthquake.

Although the property meets the requirements for authenticity, it has been affected by further seismic activity as well as long-term degradation, and a great many buildings and monumental complexes require major restoration, consolidation, and maintenance interventions.

The majority of the properties in all eight components are in private ownership. Other properties are owned by the church, the Italian State and local Government authorities. The Regional Provinces of Catania, Ragusa, and Syracuse, as well as the Municipalities of the eight towns have the responsibility for looking after the urban and architectural heritage in their respective territories. The eight towns are identified in the respective town plans as Homogeneous Territorial Zones or Historic Centres, where the existing urban and architectural heritage can be submitted only to rehabilitation and maintenance works that fully respect the historic and cultural vocation of each town.

The main legal protection and conservation measures are provided by the national and regional legislation for the protection of the artistic, monumental, landscape, naturalistic, seismic, hydro-geological and forestry heritage, in particular by Acts 1089/39, 1497/39, 64/74, 431/85, and Regional Acts 61/81 and 15/91. Numerous buildings (109) falling within the core-zones are bound according to the DL 42/2004 (pursuant to Law 1089/39) because of historical monuments. The historical towns of Ragusa Iblea and Noto and Modica, Scicli, Palazzolo Acreide are subject to landscape protection (under Law 1497/39). All goods falling within urban areas classified as Zone A (historic centre) from the general zoning and applicable planning legislation, are regulated by national and regional laws. The old town of Ragusa Ibla also benefits from a detailed plan and a special law (L.R. 61/81) that promote recovery for restoration of public and private buildings. All work on the property must be approved in advance by local Superintendents and Municipal Administration. The norms that protect the site are dictated by state laws (legislative decree 22 January 2004, Code for cultural heritage and landscape), as well as regional and municipal laws.

At the time of inscription, a Management Plan was developed to coordinate the management of the eight components of the property. The Management Structure is regularly revised.