Tels (prehistoric settlement mounds), are characteristic of the flatter lands of the eastern Mediterranean, particularly Lebanon, Syria, Israel and eastern Turkey. Of more than 200 tels in Israel, Megiddo, Hazor and Beer Sheba are representative of those that contain substantial remains of cities with biblical connections. The three tels also present some of the best examples in the Levant of elaborate Iron Age, underground water-collecting systems, created to serve dense urban communities. Their traces of construction over the millennia reflect the existence of centralized authority, prosperous agricultural activity and the control of important trade routes. 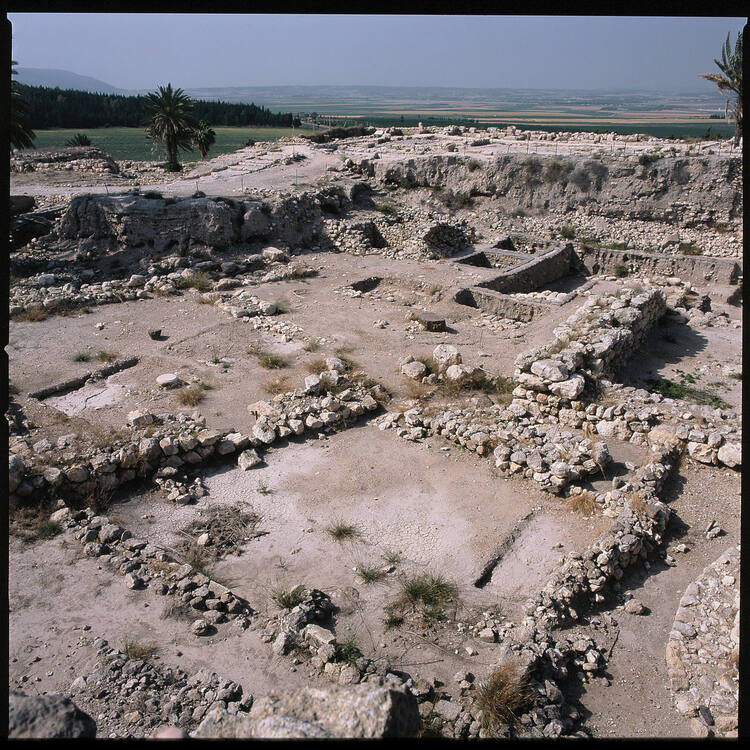 Historic settlement mounds, known as tels, are characteristic of the flatter lands of the eastern Mediterranean, particularly in Lebanon, Syria, Israel and eastern Turkey. Of more than 200 such mounds in Israel, the three sites of Megiddo, Hazor and Beer Sheba are representative of those that contain substantial remains of cities with biblical connections, and are strongly associated with events portrayed in the bible.

The three tels extend across the State of Israel; Tel Hazor in the north, near the Sea of Galilee; Tel Megiddo 50 kilometres to the south west; and Tel Beer Sheba near the Negev Desert in the south.

The three sites reflect the wealth and power of Bronze and Iron Age cities in the fertile biblical lands. This was based on, and achieved through, a centralized authority that had control of trade routes to the north east and south; connecting Egypt to Syria and Anatolia to Mesopotamia, and the creation and management of sophisticated and technologically advanced water collection systems. Together, these tels reflect the key stages of urban development in the region.

They are also representative of the large, multi-layered occupation of single sites that persisted for several millennia until the 6th century BCE, and particularly reflect in their final flowering the formative stages of biblical history from the 12th to 6th century BCE. With their impressive remains of palaces, fortifications and urban planning, they offer key material manifestations of the biblical epoch.

The early Bronze Age temple compound at Megiddo is unparalleled for its number of temples, the continuity of cult activity and the record of ritual activity. At Hazor, the ramparts are said to be the best example in the area from southern Turkey to the north of the Negev in Israel. The late Bronze Age palace is the most elaborate in Israel, and one of the best in the Levant. For the Iron Age remains, the elaborate town plan of Beer Sheba and the orthogonal plan of Megiddo have few parallels in the Levant.

All three tels have impressive remains of their underground water catchments systems, which demonstrate sophisticated and geographically responsive engineering solutions to water storage.

Criterion (ii): The three tels represent an interchange of human values throughout the ancient near-east, forged through extensive trade routes and alliances with other states and manifest in building styles which merged Egyptian, Syrian and Aegean influences to create a distinctive local style.

Criterion (iii): The three tels are a testimony to a civilization that has disappeared - that of the Cananean cities of the Bronze Age and the biblical cities of the Iron Age - manifests in their expressions of creativity: town planning, fortifications, palaces, and water collection technologies.

Criterion (iv): The Biblical cities reflect the key stages of urban development in the Levant, which exerted a powerful influence on later history of the region.

Criterion (vi): The three tels, through their mentions in the Bible, constitute a religious and spiritual testimony of Outstanding Universal Value.

All components of the tels are included in the property. The three tels have preserved substantial remains of cities from the Bronze and Iron Age with biblical connection. Each tel relates to the overall property through its temples, fortifications and gate system, palaces, water systems, town planning and prominence in the Bible. None of the attributes are under threat.

All three tels have been generally left untouched and intact since their decline, and subsequent abandonment, between the 10th and 4th centuries BCE. Over time they have retained their authenticity, and acquired the characteristic appearance of a conical shape, with a flattish top, protruding above the surrounding countryside. From the beginning of the 20th century Tel Hazor and Tel Megiddo have been the subject of archaeological investigation, with Tel Beer Sheba being first excavated during the 1960's.

In the interests of safety and interpretation, some interventions have been made to the water systems at all three sites, but these do not seriously affect the authenticity of the overall system.

At Tel Hazor an unconventional approach was taken to dismantle and rebuild a storehouse and residential building elsewhere on site. These two Iron Age buildings had been excavated in the 1950's and had remained exposed to deterioration on an "island" as excavation work proceeded into earlier archaeological levels. This action was considered justified as it also permitted the completion of the site excavation, and the consolidation of earlier evidence around and beneath the two structures.

The State of Israel owns the three tels. They are designated National Parks administered by the Israel Nature and Parks Authority (INPA), and protected under the 1998 National Parks, Nature Reserves, National Sites and Memorial Sites Law. Tel Megiddo and Tel Hazor are located in the Northern District, and Tel Beer Sheba in the Southern District, of the INPA.

The Planning and Development Forum of the Director General of INPA approves all significant plans regarding activities in the National Parks. In addition, there is an internal World Heritage Site Forum under the chairmanship of the Authority's Director of Archaeology and Heritage. This body coordinates and monitors activities at all the inscribed sites. It is also concerned with their management, and that of those on the Israel Tentative List.

In order to achieve a comparable conservation standard across the three sites that comprise the property a comprehensive conservation plan and monitoring programme is desirable.