The List Pilgrimage Church of St John of Nepomuk at ...
Print

This pilgrimage church, built in honour of St John of Nepomuk, stands at Zelená Hora, not far from Ždár nad Sázavou in Moravia. Constructed at the beginning of the 18th century on a star-shaped plan, it is the most unusual work by the great architect Jan Blazej Santini, whose highly original style falls between neo-Gothic and Baroque. 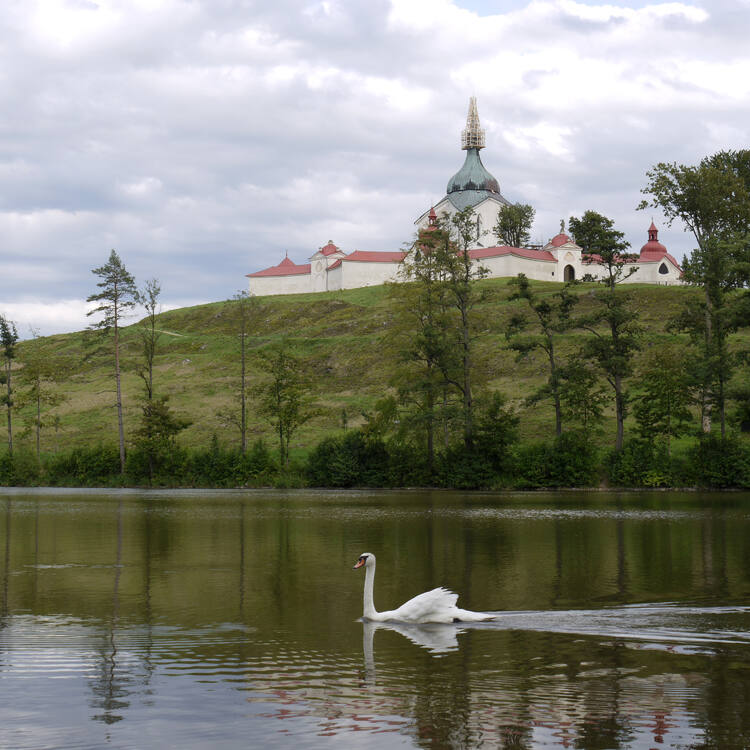 The property consists of a central-plan church surrounded by a circular cloister. It is one of the most original works by the prominent architect of the Baroque period, Jan Blažej Santini Aichel. The ensemble is an outstanding example of architecture of transition between the Gothic and the Baroque styles. The composition of the property is based on the aesthetic concept of a perfect central complex with an explicit central vertical dominant. The centrality of the design is accentuated by the ground plan, which is based on the parallel to two equivalent radials. The number 5, that is a reference to the five stars of the halo of St. John of Nepomuk representing the five virtues of the saint, is dominant in the layout and proportions. The star-shaped ground plan of the church, with five points, is defined by two groups of five radial axes upon which the basic elements of the ground plan and of the composition of the mass are organized. Ten radials, which intersect in the centre of the church itself, determine the arrangement of chapels and gates of the cloister that surrounds the pilgrims' field situated outside around the church that is situated in its centre. The chapels and the church portals are spanned by ribbed vaults with stucco decorations, inspired by late Gothic style. The influence of this period is also demonstrated by the presence of buttresses on the exterior walls and the pointed form of the windows and portals.

The main impression given by the interior is its loftiness and the upward orientation of the space. This space is divided into two by the conspicuous gallery at the base of the vaulting. The central space opens into five niches; of these, four are partitioned horizontally and the fifth, on the east, is filled by the main altar. The church retains many of its original furnishings, which include the main altar, designed by Santini and representing the celebration of St John of Nepomuk in heaven and the four side altars, also designed by Santini and depicting the four Evangelists.

Criterion (iv): The Church of St. John Nepomuk is an outstanding example of an architectural style that spanned the transition between the Gothic and Baroque traditions.

All the key elements conveying the Outstanding Universal Value of the property are situated within its boundaries, i.e. the Baroque church, the surrounding pilgrims' field with the church in its centre and the cloister enclosing the ensemble. Since its completion, the basic structure of the church and cloister remained unchanged. The definition of the boundaries of the property and its area are appropriate. None of the attributes of the property is threatened and neither is its visibility in the picturesque landscape of its surroundings. The buffer zone is identical to the protective zone of the former Cistercian monastery and the area of pilgrims' church, which was designated in 1993 by the local authorities, and no changes to the land use plan are expected in the buffer zone.

The Church of St. John of Nepomuk, a pilgrimage site at Zelená Hora, meets the requirements of authenticity. Its architecture as a whole and in detail corresponds to the original design. The church was not changed significantly following the fire in 1784 that destroyed a part of the roof and of the facade, components that were rebuilt in 1792 and 1793, and between 1794 and 1802 respectively. Following the inscription of the property, maintenance and repair works have been done both in the interior and exterior of the property; it was carried out in accordance with strict international standards for heritage conservation and with the systematic use of historical materials and techniques. The property has retained its function as a place of worship. The cemetery located inside the cloister is still present. Some graves were moved. A complete restoration of the church is currently underway.

The church is protected under Act No. 20/1987 Coll. on State Heritage Preservation as amended and it is designated a national cultural heritage site; it thus enjoys the highest degree of legal protection as regards heritage preservation. The buffer zone is identical to the protective zone of the former Cistercian monastery and the area of pilgrims' church, which has been defined to protect them in 1993.

Since 2014, the property has been managed by the Roman Catholic parish of Žďár nad Sázavou – II, that is the owner of the property, as well as the owner of the church furniture. The Roman Catholic parish of Žďár nad Sázavou – II is responsible for the maintenance, protection and promotion of the property. The site has a Management Plan, which is scheduled for regular updates. The work on the property is funded by financial resources allocated from the budget of the institution and by special-purpose financial instruments, such as grant schemes and funding through the programme of the Ministry of Culture of the Czech Republic allocated to the maintenance and conservation of the immovable cultural heritage, as well as financial resources allocated from other public budgets.

Since 2000, annual monitoring reports have been prepared at the national level, to serve the World Heritage property manager, the Ministry of Culture, the National Heritage Institute and other agencies involved.