The walls of Lugo were built in the later part of the 3rd century to defend the Roman town of Lucus. The entire circuit survives intact and is the finest example of late Roman fortifications in western Europe. 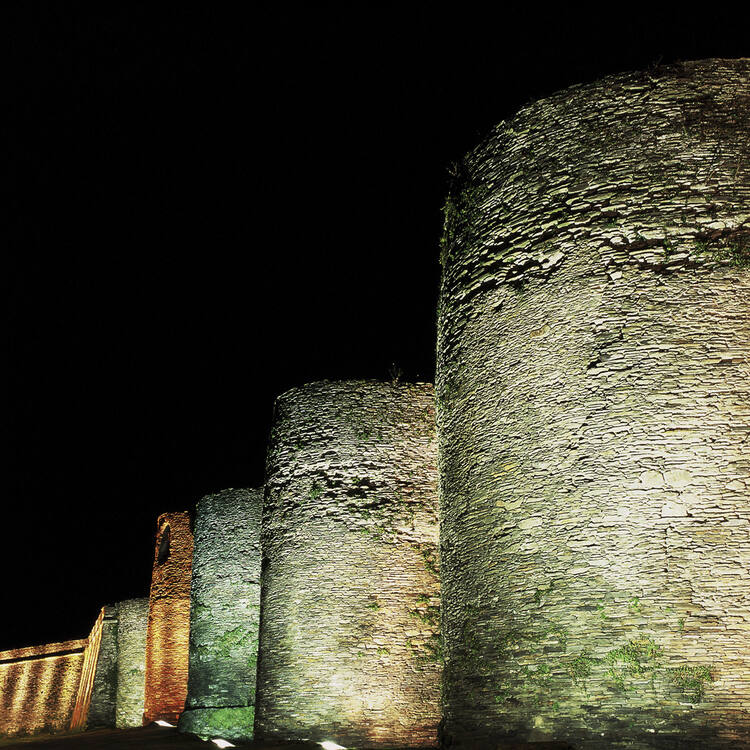 Roman Walls of Lugo, a city in the Autonomous Region of Galicia in north-western Spain, are an exceptional architectural, archaeological and constructive legacy of Roman engineering, dating from the 3rd and 4th centuries AD. The Walls are built of internal and external stone facings of slate with some granite, with a core filling of a conglomerate of slate slabs and worked stone pieces from Roman buildings, interlocked with lime mortar.

Their total length of 2117 m in the shape of an oblong rectangle occupies an area of 1.68 ha. Their height varies between 8 and 10 m, with a width of 4.2 m, reaching 7 m in some specific points. The walls still contain 85 external towers, 10 gates (five of which are original and five that were opened in modern times), four staircases and two ramps providing access to the walkway along the top of the walls, one of which is internal and the other external. Each tower contained access stairs leading from the intervallum to the wall walk of town wall, of which a total of 21 have been discovered to date.

The defences of Lugo are the most complete and best preserved example of Roman military architecture in the Western Roman Empire.

Despite the renovation work carried out, the walls conserve their original layout and the construction features associated with their defensive purpose, with walls, battlements, towers, fortifications, both modern and original gates and stairways, and a moat.

Since they were built, the walls have defined the layout and growth of the city, which was declared a Historical-Artistic Ensemble in 1973, forming a part of it and becoming an emblematic structure that can be freely accessed to walk along. The local inhabitants and visitors alike have used them as an area for enjoyment and as a part of urban life for centuries.

Roman Walls of Lugo visibly conserve their original layout and more than half of their original towers and defensive structures, gates, stairways and other elements, together with a large number of archaeological remains from the period, which help to situate the structure within its historical context, and bear witness to its creation and evolution. The property boundaries include the whole fortifications, while the intramural and extramural areas are included in a buffer zone.

Very few monumental complexes can offer the same historical authenticity and archaeological integrity, both in terms of their size and their inclusion within an urban setting, and their continued use, as part of a wider and increasingly well-known context offering a large number of archaeological remains associated with the monument. Its originality was confirmed by the findings that have been made and the studies carried out on its full layout and structure, on the moat, or on the recovery of its original gateways and stairways, all solid proof of its Roman origins (from between the third and fourth centuries AD).

The use of local materials such as slate, granite and other stones that were re-used in the construction process gives the late imperial walls an original appearance, further enhanced by the fact that their perimeter and upper walkway are completely intact.

Pressures affecting the Roman Walls include the effects of the use of transport infrastructure, water and relative humidity but these are all minor and under control.

The authenticity of the Roman Walls of Lugo lies in the way that they have survived intact for eighteen centuries. There have been many interventions over that long period to individual parts of the walls for practical and aesthetic purposes, which mean that they do not survive in their precise original form, and so, using a restricted interpretation, they might be considered to be lacking in some measure of authenticity. However, as an ensemble their authenticity is impeccable.

The legal framework that controls interventions carried out on the monument has its origins in the Spanish Constitution, in the Statute of Autonomy of Galicia, Organic Law 1/1981 of 6 April, and in Royal Decree 2434/1982 of 24 July on the transfer of functions and services from the State Authorities to the Autonomous Region of Galicia in cultural matters. Roman Walls of Lugo is considered as an Asset of Cultural Interest by the Royal Order of April 16, 1921, giving it the highest legal protection of their cultural values.

Any intervention involving the Walls or their surrounding area must comply with the specific regulations on the protection of cultural heritage at national level, as set out in Law 16/1985 on Spanish Historical Heritage, and regional regulations set out in Law 8/1995 on the Cultural Heritage of Galicia.

This regulatory framework involves the collaboration of three public authorities who are responsible for protecting the monument: the central State Authorities, the Regional Authorities of the Xunta de Galicia, and the local authorities of Lugo City Council. This collaboration between the different authorities is the basis for the direct management of the monument, carried out by the Xunta de Galicia as the owner and responsible authority for its care within the autonomous region.

All restoration and maintenance work on the Roman Walls is carried out in strict compliance with the directives of the Advance Integral Plan for the Conservation and Restoration of the Walls of Lugo.

Lugo City Council is responsible for managing actions carried out on the Walls in accordance with the stipulations of the Special Plan for the Protection, Rehabilitation and Reformation of the Walled Area of the City of Lugo and its Area of Influence. The municipality has begun a series of interventions aimed at preserving the monument, which essentially consist of protecting it from traffic and pollution by turning the road that runs around the walls into a pedestrian walkway, and by creating an interior pedestrian walkway that relieves the adjacent structures with a series of green spaces along their whole extent. All of these plans focus on a process of renovation, rehabilitation and enhancement of Lugo’s cultural heritage, represented in a building that has been specially built for this purpose, the Visitors’ Centre for the Walls.